From boat anchor to booting game.

When Johnny arrived at my house, he was a 325lb plywood boat anchor. He didn’t boot up at all. The main reason is that the power driver board had been removed from the machine. The reason for that was that the seller had another game that needed it, so he sold the broken one to me along with poor Johnny here, in the hopes I could fix it.

My first step was simply to see what the broken board was doing. I needed to know the symptoms before I could know what to start diagnosing. The power driver board has a very large number of connectors around the edges of it, because it supplies all manner of currents and voltages to every part of the machine. As you can see from this page in the manual, there’s a lot going on. 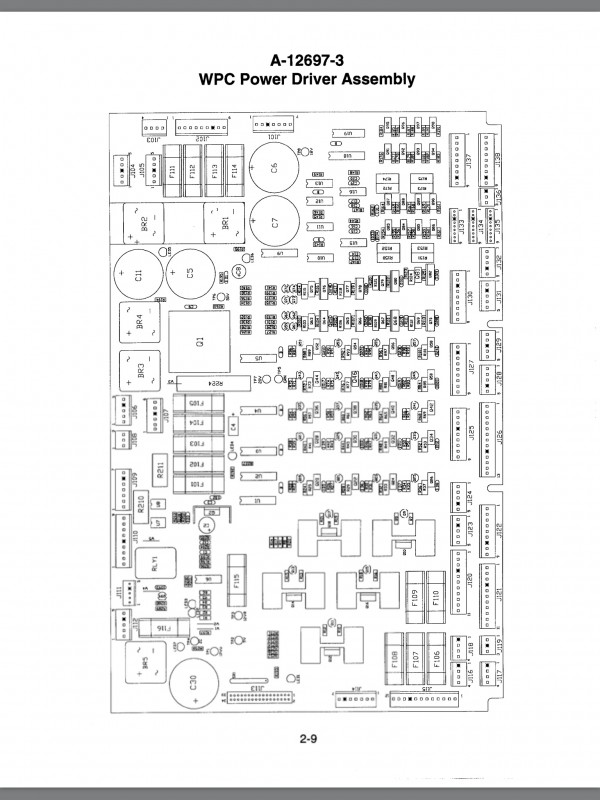 To give you an idea of the madness of a pinball machine, this board supplies 70VDC, 20VDC, 18VDC, unregulated 12VDC, unregulated 5VDC, regulated 12VDC, regulated 5VDC, 6VAC, and possibly others that I’m missing. Furthermore, some subsystems have their own regulated supplies. It’s a Willy Wonka Candy Factory of currents and voltages in there. To make things more confusing, this is a general application board used in all Williams games of the era, so not all connections and components are used in every game. As we’ll see though, that may work in our favor.

So, I installed the board in its position in the back box using the provided screws, and proceeded to hook up the many connectors. Nothing was labelled of course, so there was some potential for adventure here. For most of them, there was either only one place it would fit within reach of the harness, or the connector was keyed. This last part becomes important. Williams keyed these connectors in a very simple way. They used a header that was one pin wider than they needed, then broke off an arbitrary pin, and plugged the matching hole in the connector with plastic. By throwing away a different pin in each connector, you get idiot-proof connections without having to buy a lot of special connectors. Again, these machines were designed to be serviced, so a lot of thought went into things like this.

Everything was going fine until the final two connectors. 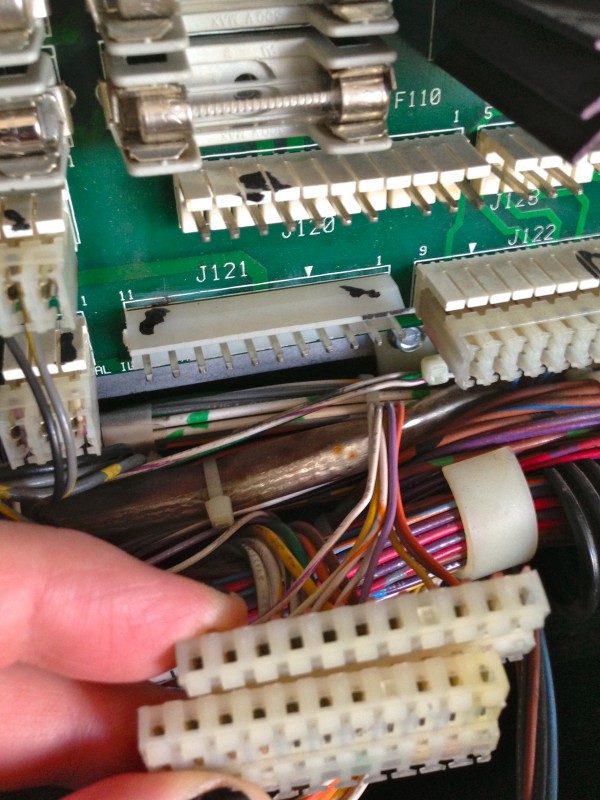 These two connectors go to J120 and J121. But wait! Look at J121- all eleven pins are present, and both these connectors are keyed on the 8th pin. Now what?

After studying the schematics in the manual, and trying a few things with the harnesses, it was pretty clear that the lower of these two connectors was supposed to mate to J121. Baffled, I spoke to the seller to see if he knew anything about the history of this board. This would become my first lesson in The Secret Lives of Pinball Machines. Like an old car, these machines have been passed from person to person over the years, and each owner has done various things to them- some good, some… colorful.

In this case, the power driver board I was given came out of a different machine- a Whitewater. The previous owner of the Whitewater machine had replaced J121 in his machine, but had replaced both halves of the connector. In doing so, he didn’t bother recreating the proper keying of the eighth pin, as shown in the photo above. So this board fit perfectly in his Whitewater, but mine still needed the proper Williams keying. So what’s the easiest way to re-key this header so the connector will fit? 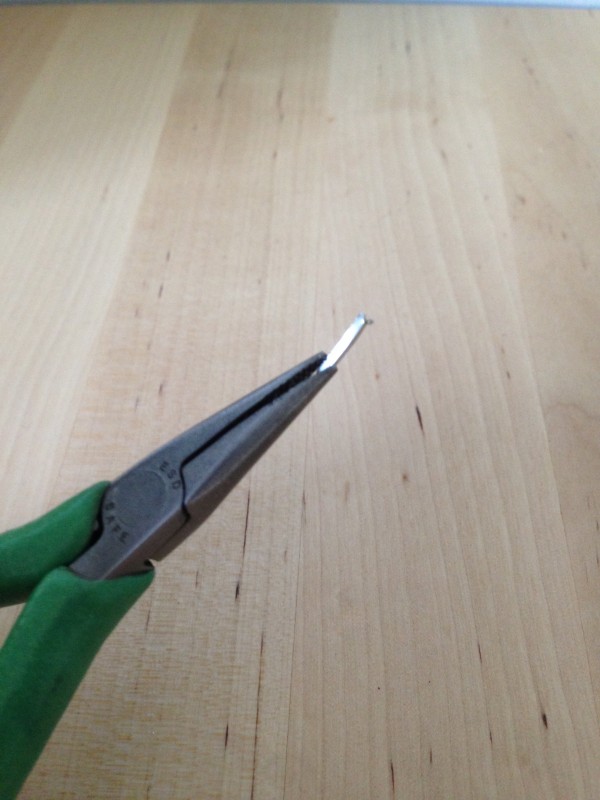 Snap that sucker off. Yep, I took a deep breath, triple-checked to make sure this was the vestigial pin, and twisted it off.

Thus marks my first official hack on this machine, although perhaps it doesn’t count, since I’m actually returning the connector to its correct state.

With that quick fix, the connectors all went in the right places, I held my breath, and flipped the switch.

Huzzah!  But wait- wasn’t this board supposed to be broken? I ran it through all the tests of lights, solenoids, flashers, and other things needing power, and it all checked out. So either the seller was mistaken about this board being damaged, or by chance Johnny is using different driver elements than the Whitewater game it came out of. Remember that these boards were used in a lot of games, so not every part is used all the time.

Huzzah again! Well, let’s say huzzah-ish, because while it fires up and mostly seems well, the display (and accompanying bong) tells us there are problems. 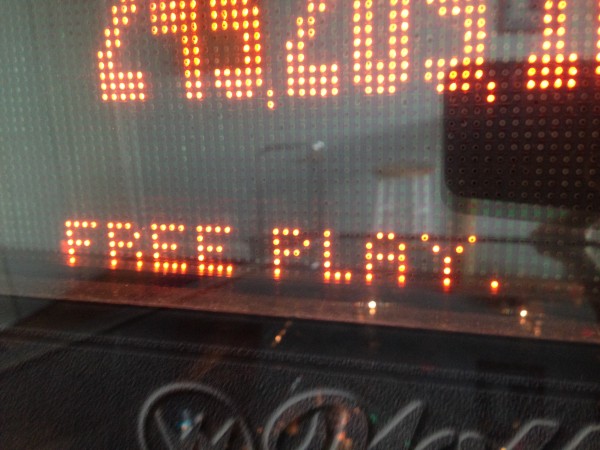 The other indication of an issue is this. See that extra pixel after “Free Play”? That’s what’s called a Credit Dot. It’s a “secret” message to the technician that while this machine is basically working, the computer has detected problems.

To see what those problems are, we go into the test report using the service controls inside the coin door. Details of this process are covered in the manual.

Credit Dots are caused by switch problems. If the game hasn’t seen any activity from a given switch for a long time (say 30 or 40 balls), it assumes the switch is bad and flags it. This is a great feature of modern games, considering they have many many switches. 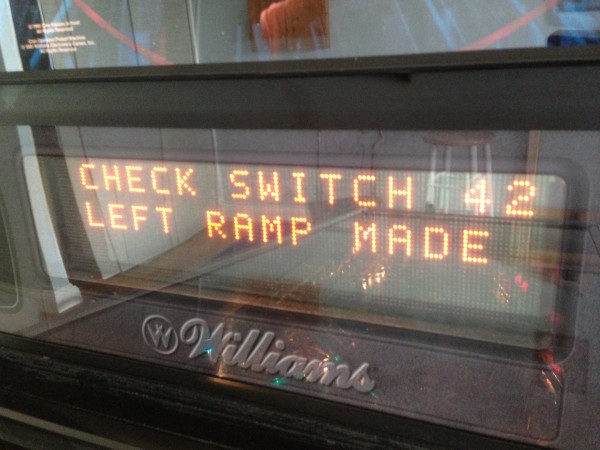 The Test Report in the diagnostics menu tells me it’s switch #42, the “Left Ramp Made” switch. The manual has a diagram of where this switch is physically located in the machine.

After locating the problem switch, we go into single switch test mode. Here, the machine simply watches the switch in question and tells us when it is open or closed. My first flagged switch, #42, was actually working correctly. Activating the switch once by hand cleared the error. If you’re a lousy player and playing a lot of games (like me), it’s possible you just aren’t hitting all the switches with any regularity. In that case, the credit dot is telling you to get better at pinball.

A second switch was flagged, however. #55, Right Ramp Made. I knew for a fact I had been hitting this ramp, so something legit seemed to be wrong. So I went into test mode on that switch next. 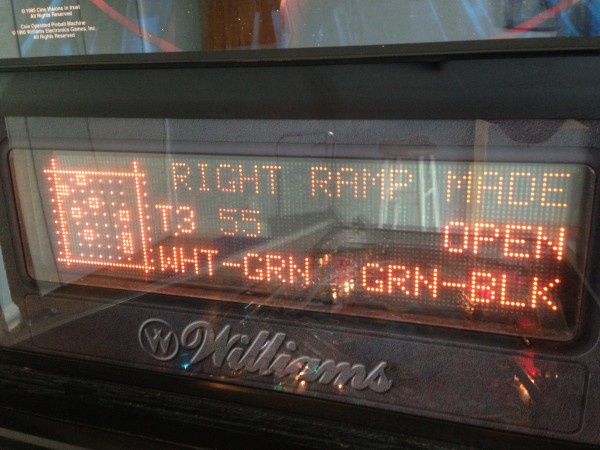 Conveniently, this test display also tells us what the colors of the wires are on the offending switch, so we can trace it if needed. There’s also a display of the entire switch matrix, indicating the current state of every switch in the game.

To test the switch, always use an actual pinball. Roll a ball over, through, or under the switch to see if it activates correctly and consistently. Don’t use your finger, because the ball may react differently. Also, try to roll the ball at the same speed it would travel during gameplay. Speed can affect how the switch activates. 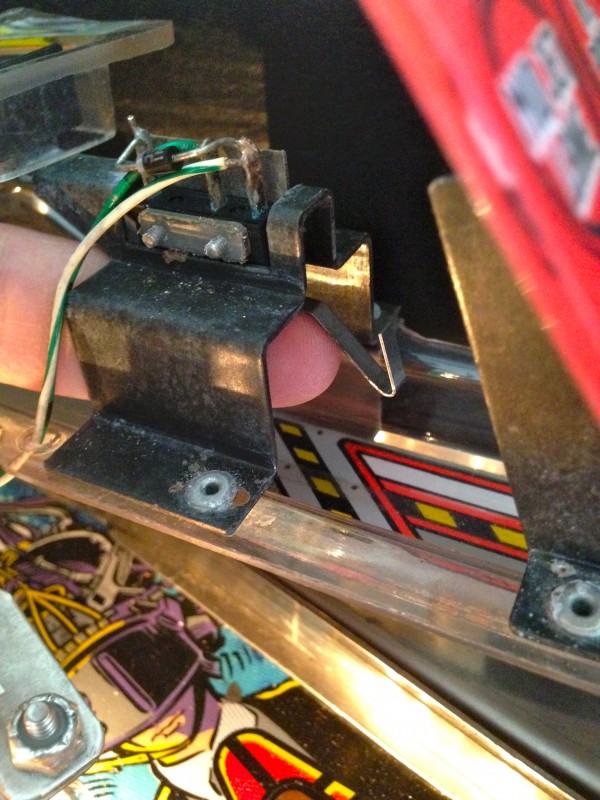 Here’s the switch in question. My finger is holding it at the highest point after a pinball went through. This was was not high enough to activate it. Simply bending the lever down a bit fixed it.

After clearing those two switches, the credit dot went away and I was back in business. Now for some things I found during my initial cleaning and inspection. 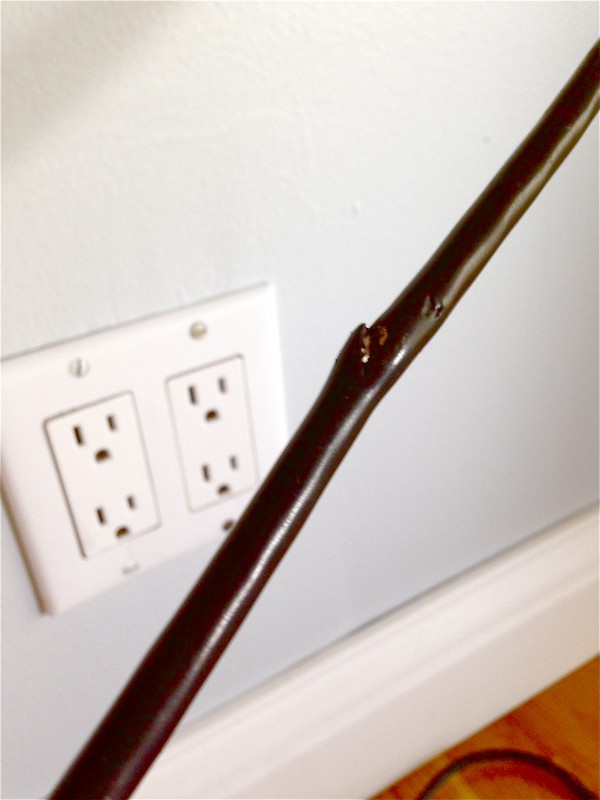 The AC line cord for the machine was in a sorry state. Multiple points of damage like this. Always put a new line cord on an old machine. There’s no excuse not to, and shit like this is dangerous. 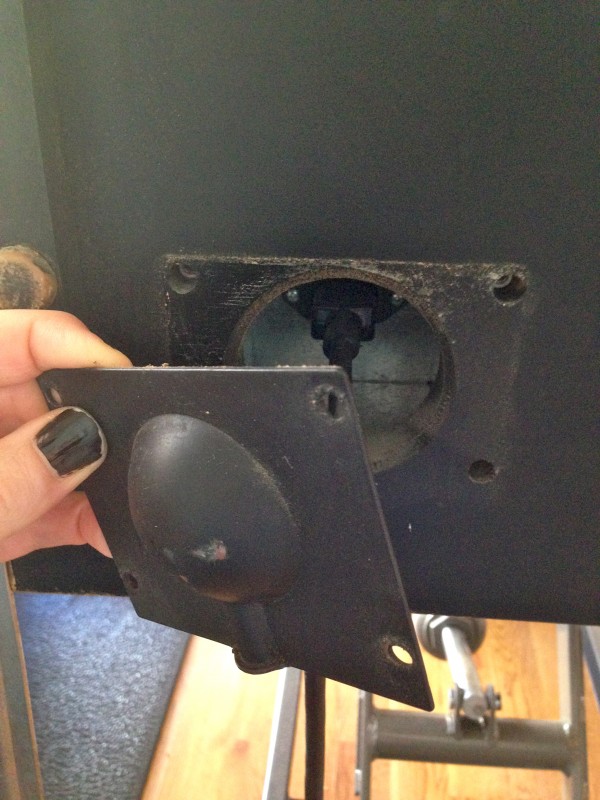 Luckily, on modern machines, it’s as easy as removing this access panel, and plugging in a new 10 amp IEC320C13 cord. These only cost a couple of bucks, so not replacing it is utterly ridiculous. This line cord panel is supposed to be held on with security screws. Mine had normal Phillips head instead. I opted not to replace these, because on a home-use machine, security screws are a pointless hassle. 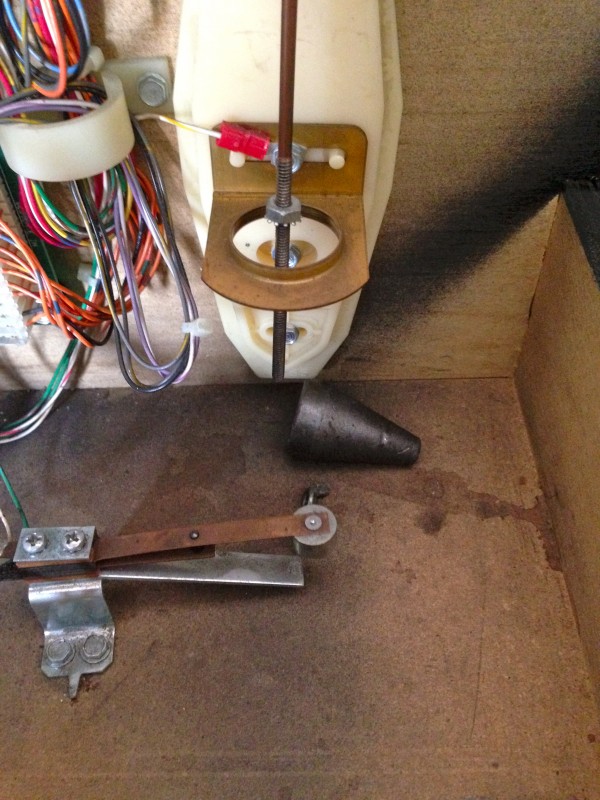 Johnny’s tilt switch was in a sad state. This cone-shaped plumb bob detects excessive enthusasm by completing a circuit with the outer ring. The cone shape means you can adjust the sensitivity of it by moving it up and down on the threaded rod. The top and bottom of the bob are supposed to be held with wing nuts, but someone has replaced the upper one with a regular nut. I put a new wing nut on there, and replaced the bottom one (which was lying in the cabinet). If only all the fixes were this easy! 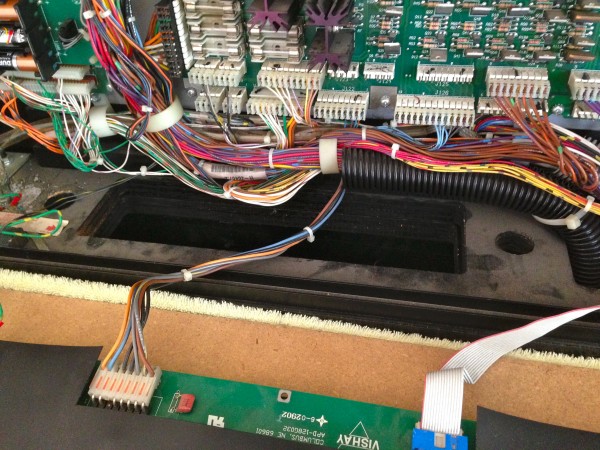 Notice anything missing here? This is potentially quite a serious problem.

In case you weren’t aware, the back box hinges up and down for transport. In the up position, there’s a small latch on the back to hold it upright. However, this is not much of a clamp, and it isn’t supposed to be relied upon. The two holes on either side of the square opening in the above photo are for wing bolts that hold the back box firmly in place. These bolts can be ordered from places like Marco Specialties, so this was an easy fix.  Without those bolts, there’s only a flimsy clamp preventing the entire back box from coming crashing down. Those bolts are very important! I’m shocked to find them missing, and even worse, the latch on the back box isn’t in very good shape. There hasn’t been much holding Johnny’s head up for a long time (except possibly his own sense of self-worth). 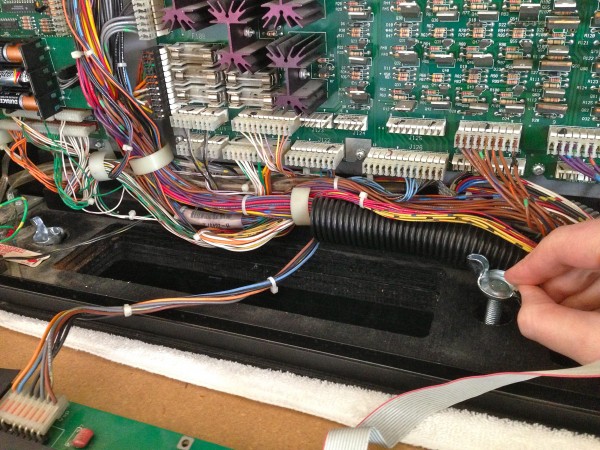 If you’ve ever seen a machine with dented side rails, this is why.

So, with all these basic fixes done, I was able to actually play a few games. Hooray! Pretty soon though, new problems started to appear. It’ll be a while before we get all the kinks worked out of our old boy here. More on that next time!