All your base are belong to us.

Every aspect of a pinball machine is a compromise between durability, cost of manufacture, serviceability, and the limits of technology. The seemingly benign topic of this post is a canonical example of that- battery boxes.

These games have a lot of settings they need to maintain. Elaborate cost structures, important bookkeeping data for operators, gameplay modifications, regional language information, etc. When these games were made, persistent flash memory was not an option. While it existed, it was far, far too expensive for mass-produced commercial equipment. Instead, the state of these machines was maintained with a simple set of AA batteries tied to a static RAM. Much like computers of the period, other options were sometimes used (such as those awful soldered-in NiCd batteries). The pinball companies learned pretty quickly that operators wanted something simple that could be replaced. AAs soon took over as the standard, but there were many growing pains here as well. Originally, the battery box was mounted directly to the CPU board (or other main board), because this is cheap to manufacture. The battery box can go through the wave soldering machine with everything else, no muss, no fuss. However, this turns out to be a very very bad idea if the operators don’t change the batteries regularly. They often didn’t, either due to time constraints, or the machines being in storage. The batteries work just fine for the better part of decade, but the seals in them don’t. It only takes a couple of years for batteries to start leaking. They don’t leak acid, as is commonly said, but rather alkaline (hence the name alkaline batteries). As you may recall from middle school chemistry, bases are just as destructive as acids. It doesn’t matter which direction you go on the pH scale- it only matters how far.

You see where this is going. The batteries get old, they leak, the base gets on the PCBs, and the damage commences. This damage is insidious, difficult to see, and can create maddening problems that are difficult to debug. Not to pick on pinball makers- this was a common problem in arcade games as well. The classic example is the Sega System 16 platform, used in great games like Shinobi, Altered Beast, and Golden Axe. This platform had what’s known as a Suicide Battery. The battery is mounted at one end of the motherboard, and when mounted vertically in the machine, that becomes the top. When the battery leaks, the alkaline runs down the entire length of the board, eating components, traces, vias, and anything else it touches. This often bricks the game permanently. In summary, at some random point around the 8-10 year mark, the game randomly commits suicide (hence the name).

Pinball makers did catch on to this, and made some efforts to address the problem (without adding too much labor cost during manufacturing, of course). Eventually, Williams settled on putting the battery box up on standoffs, at the bottom of the main board. That minimizes the chance of corrosion affecting any PCBs, while still making manufacturing fairly easy. 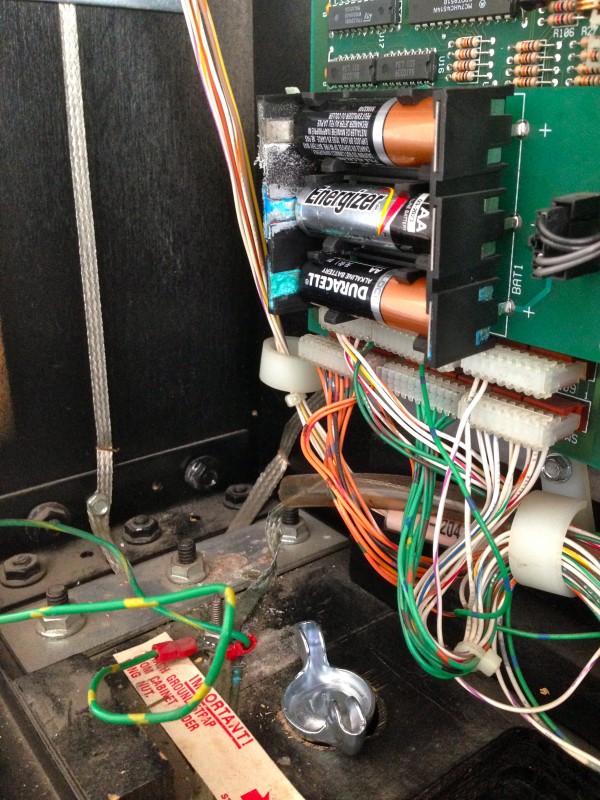 Note the battery box is on a small daughter board above the main CPU board. Also note the large amount of corrosion on it from neglect by previous owners. You can see it has leaked all over the ground straps and such, making quite a mess.

Even with this “remote” location, there’s potential for trouble. 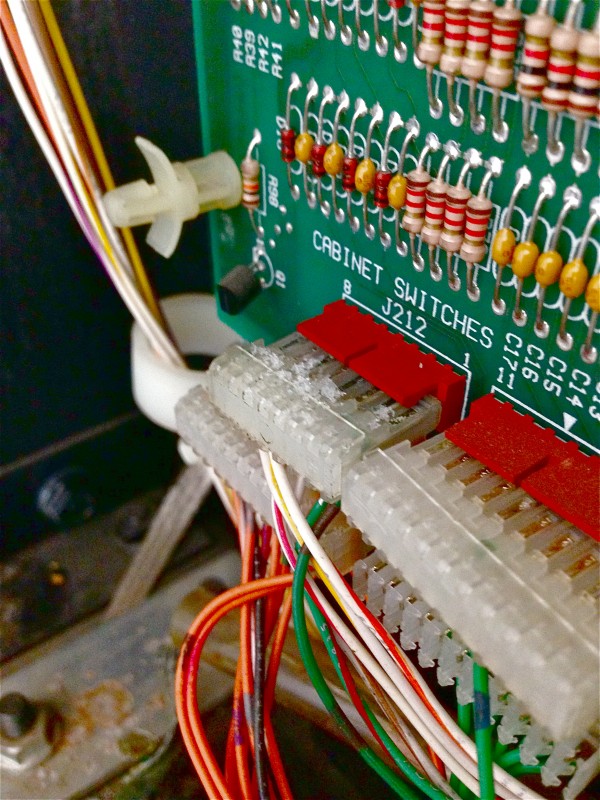 Note the alkali crystals sitting on top of J212. These were revealed when I pulled the battery box off, and are making that connector into a time bomb. This is sure to be trouble someday.

My Johnny wasn’t showing any immediate signs of problems caused by battery damage that I could see, but it’s clear that he had dodged a bullet. There’s a ton of corrosion all over the place, and it’s sheer luck that nothing worse has happened. I’m going to fix this before his luck runs out.

The first step is to get that battery box off of there and assess the damage. It may need to be replaced, or it may be salvagable. 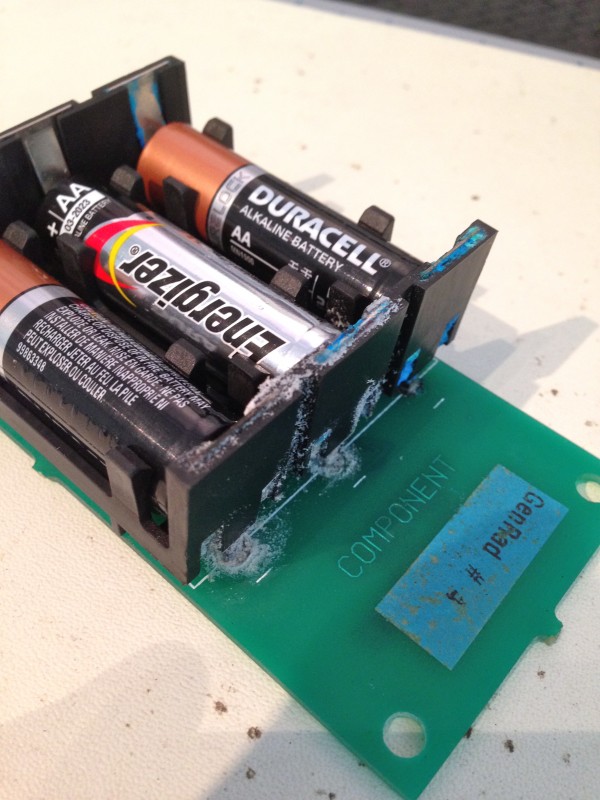 Look at that! The corrosion goes all over the outside, and right down to the pads on the PCB. 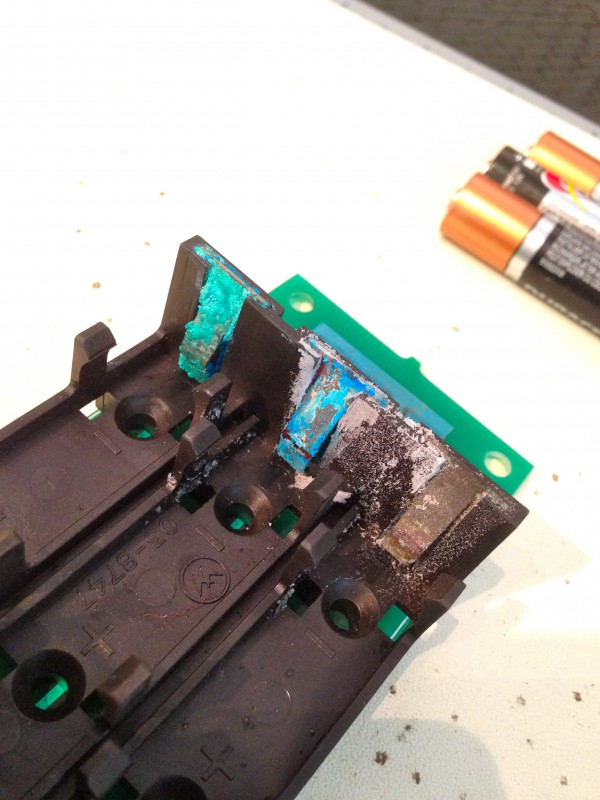 Holy crap!!  I couldn’t believe how bad it was once I got the batteries out. It looks like Jesse and Heisenberg have been busy in there!

This looks really bad, but battery corrosion often cleans up just fine. If it hasn’t sat there too long, you can neutralize it and the metal underneath may be fine. It’s a simple matter of applying a good soaking of vinegar to all affected areas. The crusty corrosion will soften up and melt away. You can see it bubbling as the reaction takes place. Sometimes you can simply soak the part in vinegar. In this case, I opted not to, since I didn’t want to trap vinegar in any of the nooks and crannies, where it might cause problems later. Instead, I went in surgically, by soaking cotton swabs with vinegar and wiping off the corrosion. A dental pick is helpful to get in the cracks and such. 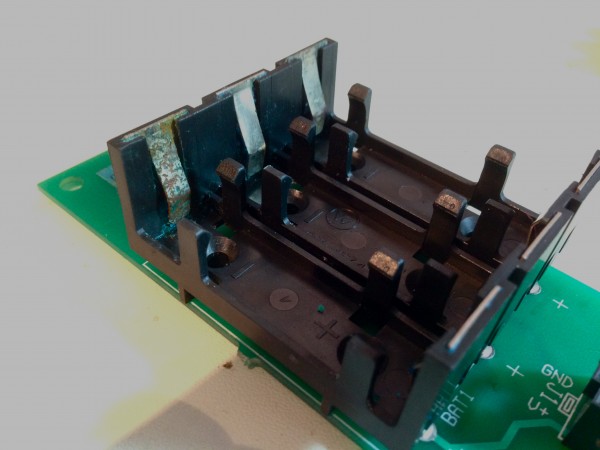 Well, 90% of the corrosion cleaned up beautifully. Unfortunately, you can see that one contact has not fared well. It’s actually rusty, because the base has eaten away the nickel coating on the steel.

So, decision time. Do I toss this and replace it, or use it as is? For the time being, I decided to continue using it (after verifying that it still worked). The main reason is that I’m going to make sure future leaks can’t cause problems, and I like that this is an original Williams part (the (W) logo is even stamped on it). Among other things, it’s specially designed to hold the batteries firmly when the back box is folded down. I’ll hang on to it for now. The corrosive base is all neutralized, so it shouldn’t cause any further problem. I did of course replace the batteries. The old ones had been soaking in that corrosion, so their seals are likely close to being shot, even though they were new(ish) batteries.

The great thing about Williams WPC-S and WPC-95 games is that the battery box is connected to the CPU with quite a long cable. In fact, this cable gives us enough slack to mount the battery box somewhere further out of the way. 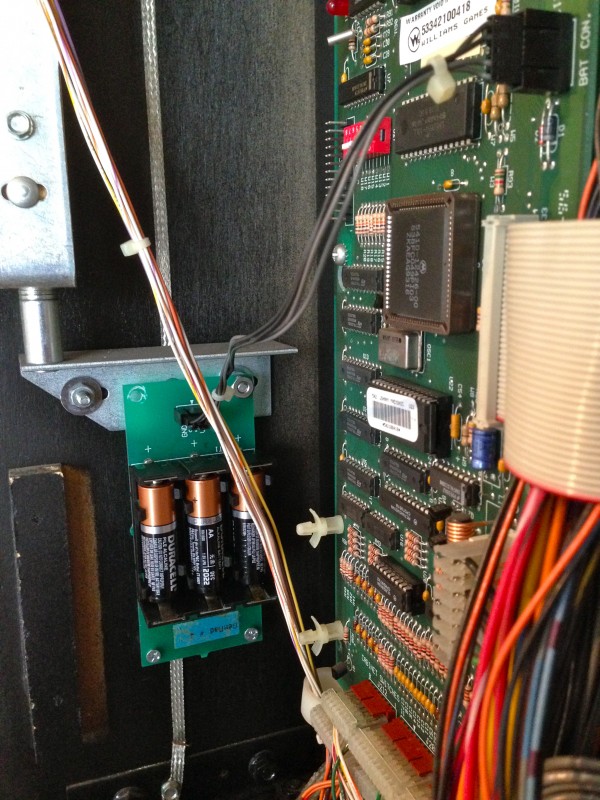 Tah dah!  The batteries are now a few inches away from anything resembling a circuit board, and there’s nothing under them except painted wood. Even if they do leak again someday, there should be no damage at all.

Mounting the board in this new location was super easy. The hinge mounting bolts for the light board are conveniently the perfect size for one of the standoff holes in the battery box PCB. They have extra thread on them, so one 1/4″-20 nut, and the top was mounted.

For the bottom, I used some wood screws to attach it to the side of the head. These needed pilot holes. This needs to be done with care, because it would be very sad to punch a hole through the artwork on the outside of the head. 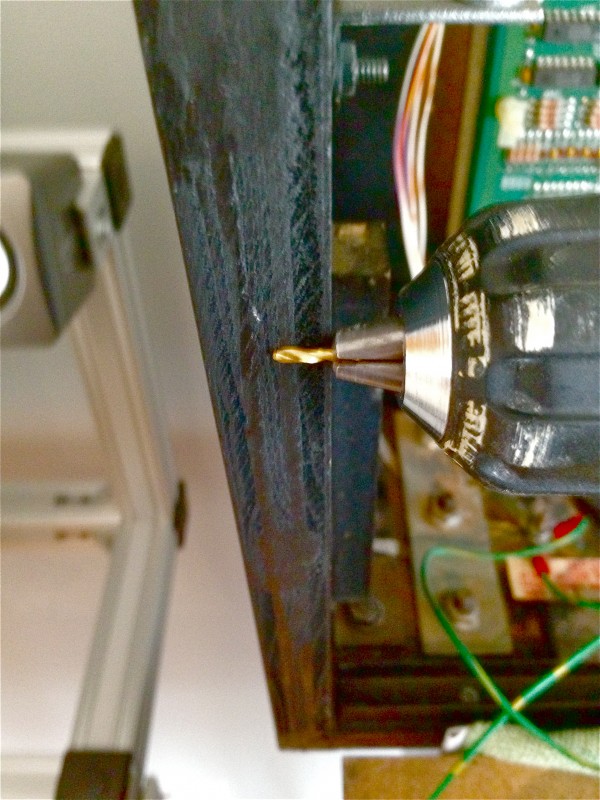 Here’s an easy way to prevent drill-through. Choke up the drill bit so that only as much is exposed as the depth you want. Guaranteed perfect depth pilot holes every time. 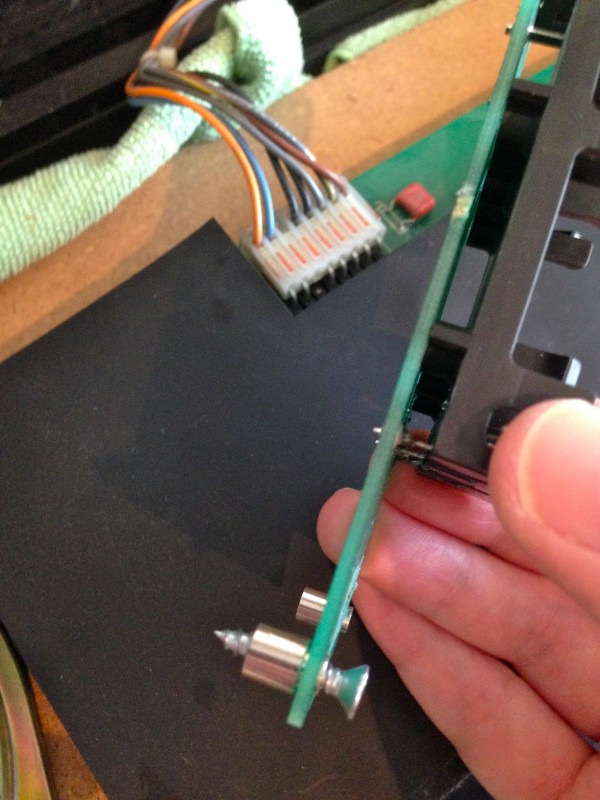 I happened to have some metal PCB standoffs in the junk pile that were the perfect size to hold the board in the air, but washers would work just fine. 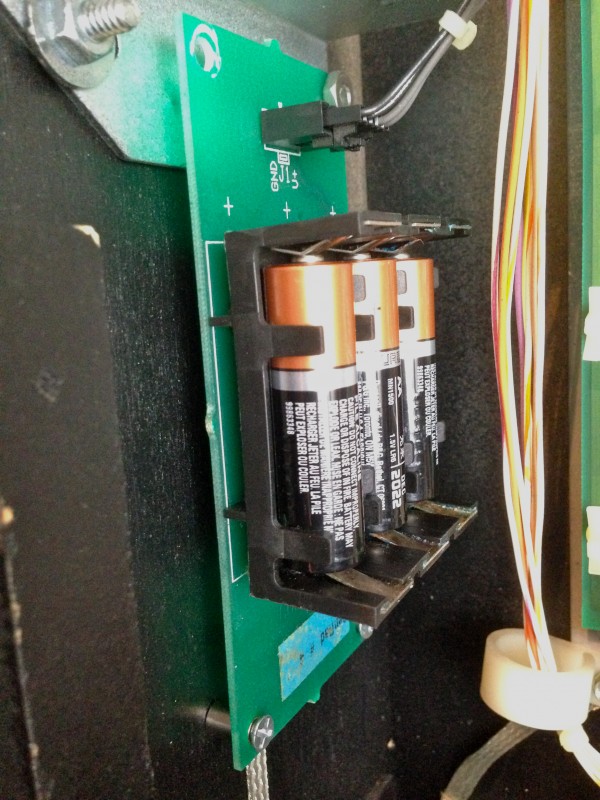 Note that the board is held about 1/4″ off the surface. That metal hinge bracket at the top is grounded, so you don’t want the battery PCB to be able to touch it. There’s also a ground strap running under the board here. With these standoffs, there’s no danger of anything touching.

The top left corner of the board is unattached, since there wasn’t an easy way to fasten it there. However, three corners is plenty for that little PCB. It’s definitely not going anywhere.

This location is perfect for the battery box, because it’s remote, the original CPU cable reaches it, and it’s not in the way of the light board, or the speaker panel. 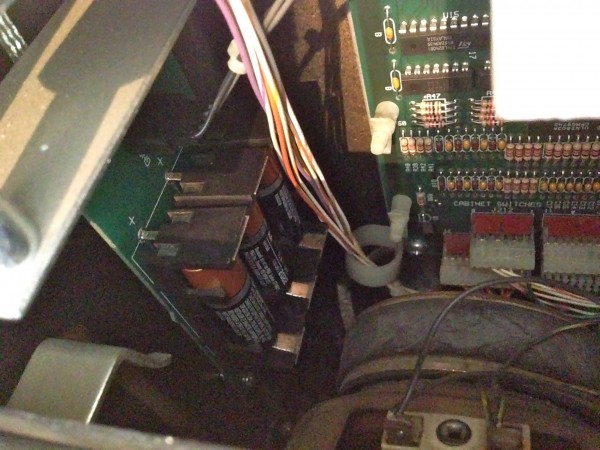 Here’s the DMD panel back in place.  The battery box clears the speaker and mounting clamps nicely.

A good rule of thumb is to change the batteries in your pinball machines when you do your smoke detectors. Back home, the local fire department used to run Public Service Announcements on New Year’s Day to get people to do it. I guess that stuck with me, because to this day, I change all my smoke detector (and now pinball machine) batteries every New Year’s Day. It’s a nice little chore you can do while hung over. Just don’t set them off by accident, because that does not mix with a hangover.

That’s all there is to this one!  I’m going to change Johnny’s batteries regularly, but someday someone else might forget. If so, I’ve just done them a huge favor. Whoever you are, future Johnny Caretaker, buy me a whiskey (neat) and we’ll call it even.