A themed novelty horn for a 24 Hours of LeMons race car.

Let’s say your race car needs a horn. Now say that car runs in The 24 Hours of LeMons, and has a carefully crafted (rules-mandated) theme. That means you need a hilarious horn, right? As part of the theme for B-Team Racing, we wanted a horn that would play Mr. T sound effects. Here’s how I hacked up an old iPod to do just that.

Since this is a LeMons race car, the project also has to cost basically nothing. Assuming you have an old iPod lying around (and who doesn’t, what with the kids just throwing them away these days), the only cost of this project is an amplified PA Horn, which runs about $60. You may also have to drop a few bucks at Radio Shack for connectors and whatnot, depending on what you already have lying around.

Since this hack was originally written, our theme has changed, and we’re now B-Team Kill Phil. This horn was easy to adapt to play Kill Bill sound effects, as you’ll see.

T-In-A-Box will be operating in a race car, so we need to do what we can to make sure it survives. As of this writing, it has survived 12 races and still mostly works, though the power connectors are problematic. They should be positive-locking automotive connectors, rather than the friction-fit household style I used. I took the following precautions to ruggedize the device:

Here’s the final device in action. This is flash-to-pass, B-Team style. We pity the fool who blocks our move! 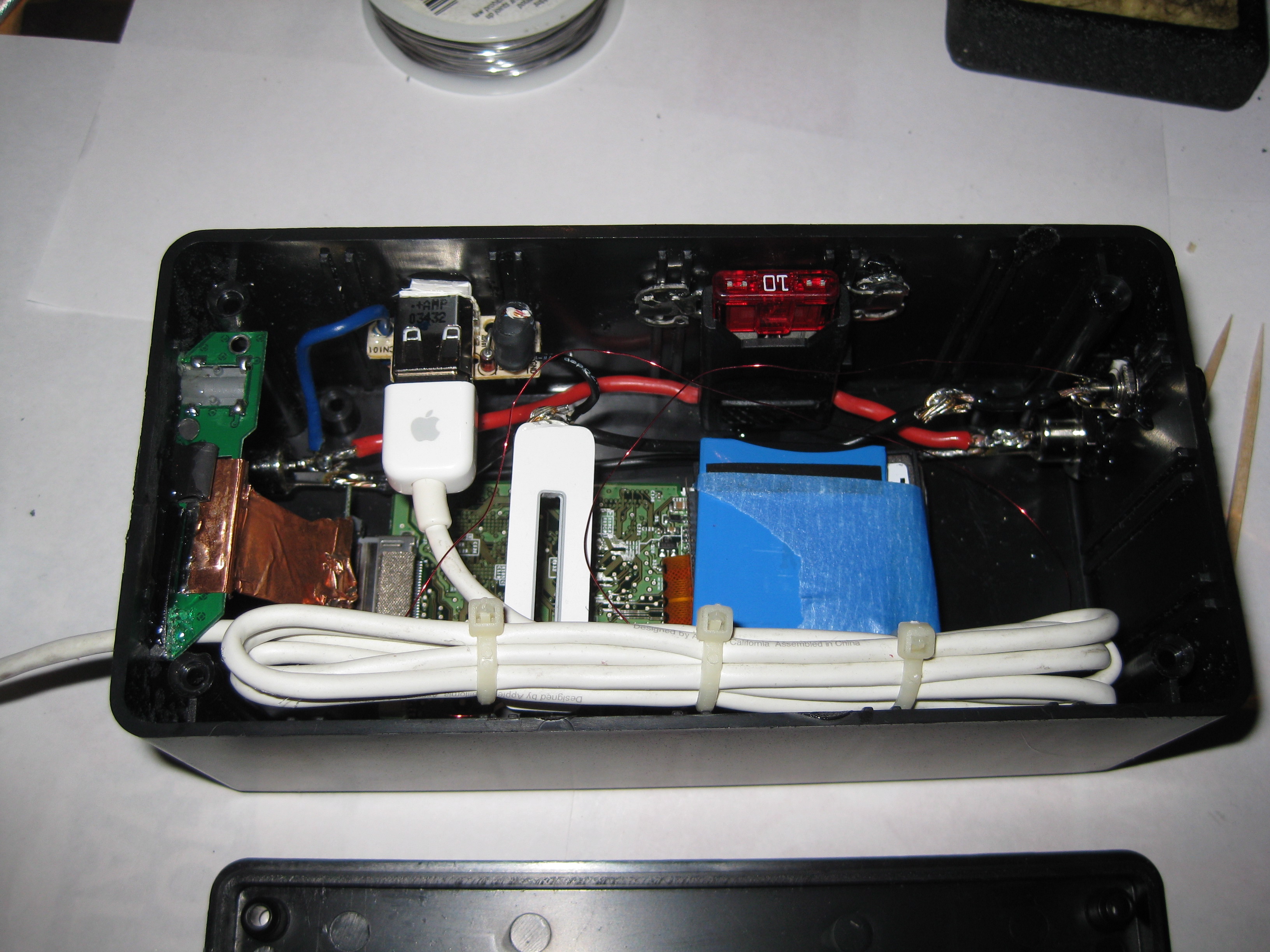 Here’s what we’re building. You can see the iPod’s original PCB in the bottom. The blue block is the Compact Flash conversion, and the original Li-Ion battery. The latter was shot, but I saw no need to confuse the charging circuit by removing it. So let’s get started! 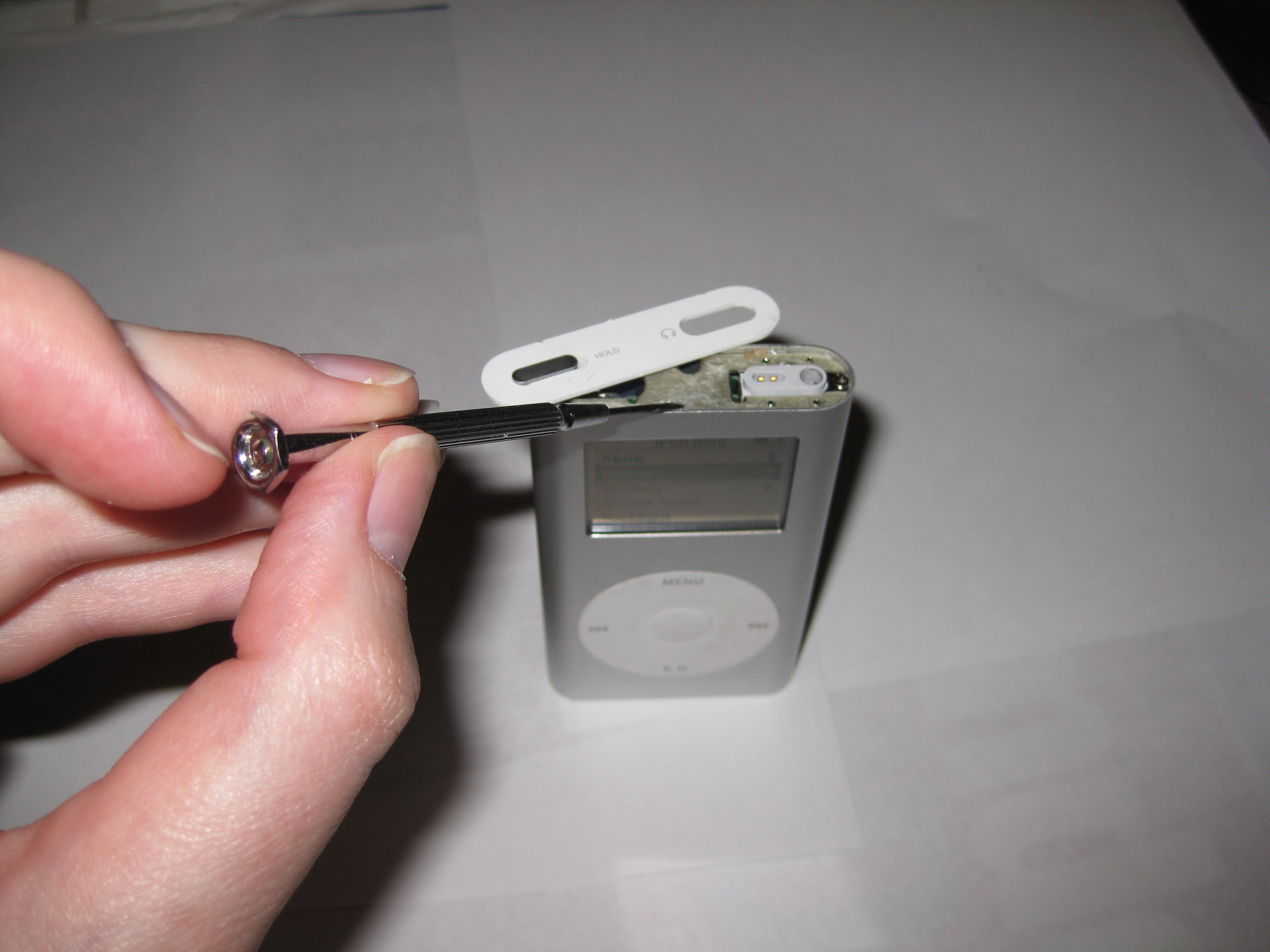 I'm using an iPod Mini here, since that's what I had. Notice how the iPod is actually on while I'm taking it apart. That's just how we roll on The B-Team. 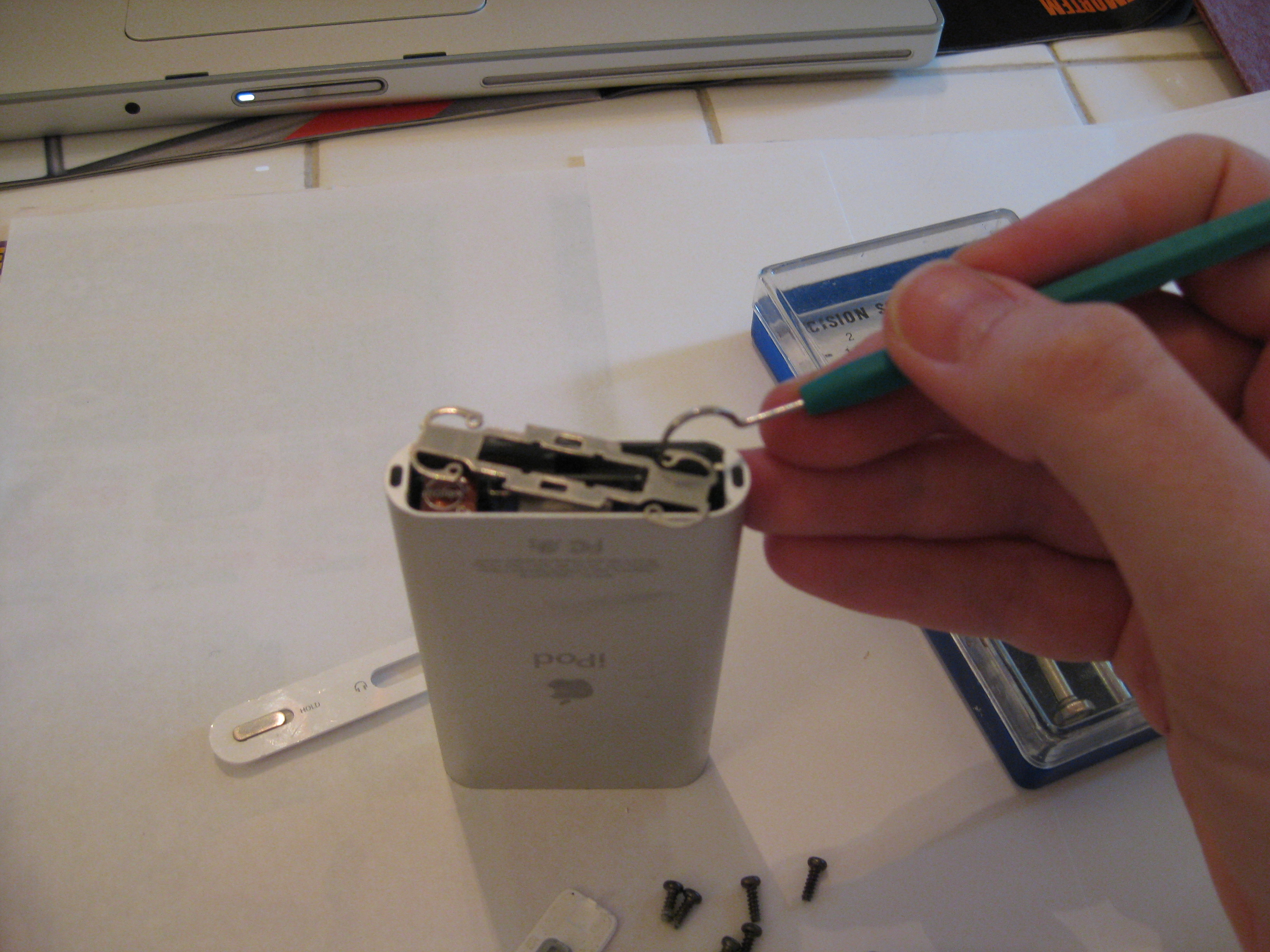 The guts of a Mini are held in with this nifty spring clip. It’s a sexy case design, and I must find a use for the leftover bits. 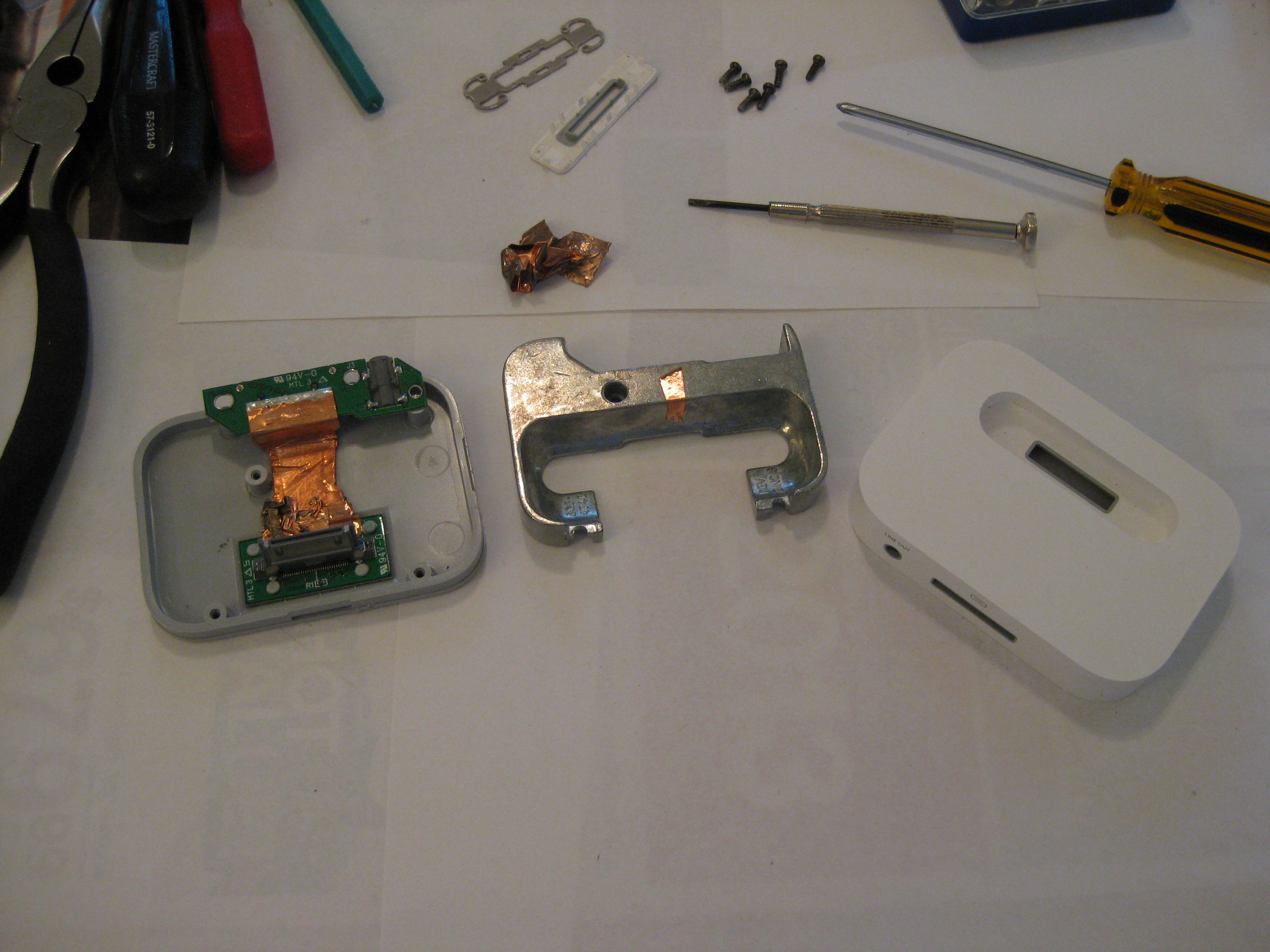 We also need some bits from inside the Dock, so dismantle that as well. Those dock connectors are worth their weight in gold chains. 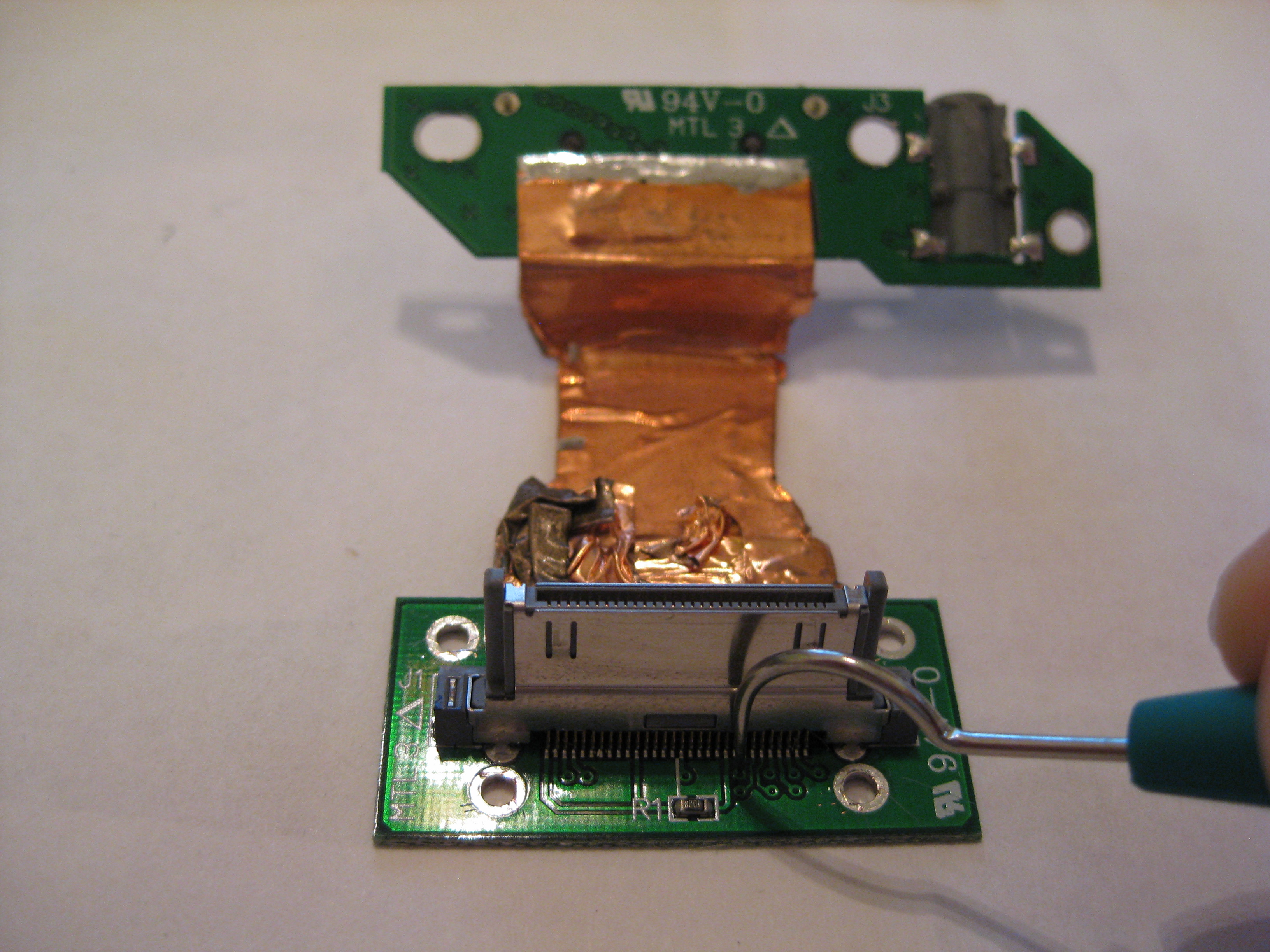 T-In-A-Box will be running in a race car, so we'll have a 12VDC source. This is great, because older iPods can charge off of FireWire, which typically supplies exactly that. In truth, the iPod is pretty flexible. It seems happy with a wide range of charging voltages. I've run mine off a 9V battery with no ill effects, and the spec for FireWire lists 30VDC as the maximum. So let's call that the safe charging range: 9-30VDC. Science! There are two ways I considered for getting 12VDC into the charging circuit. The first is tapping directly in to the dock connector. To do that, you need to solder a wire to pin 20, indicated here. If your soldering skills are up to that challenge, go for it. Mine are decidedly not. 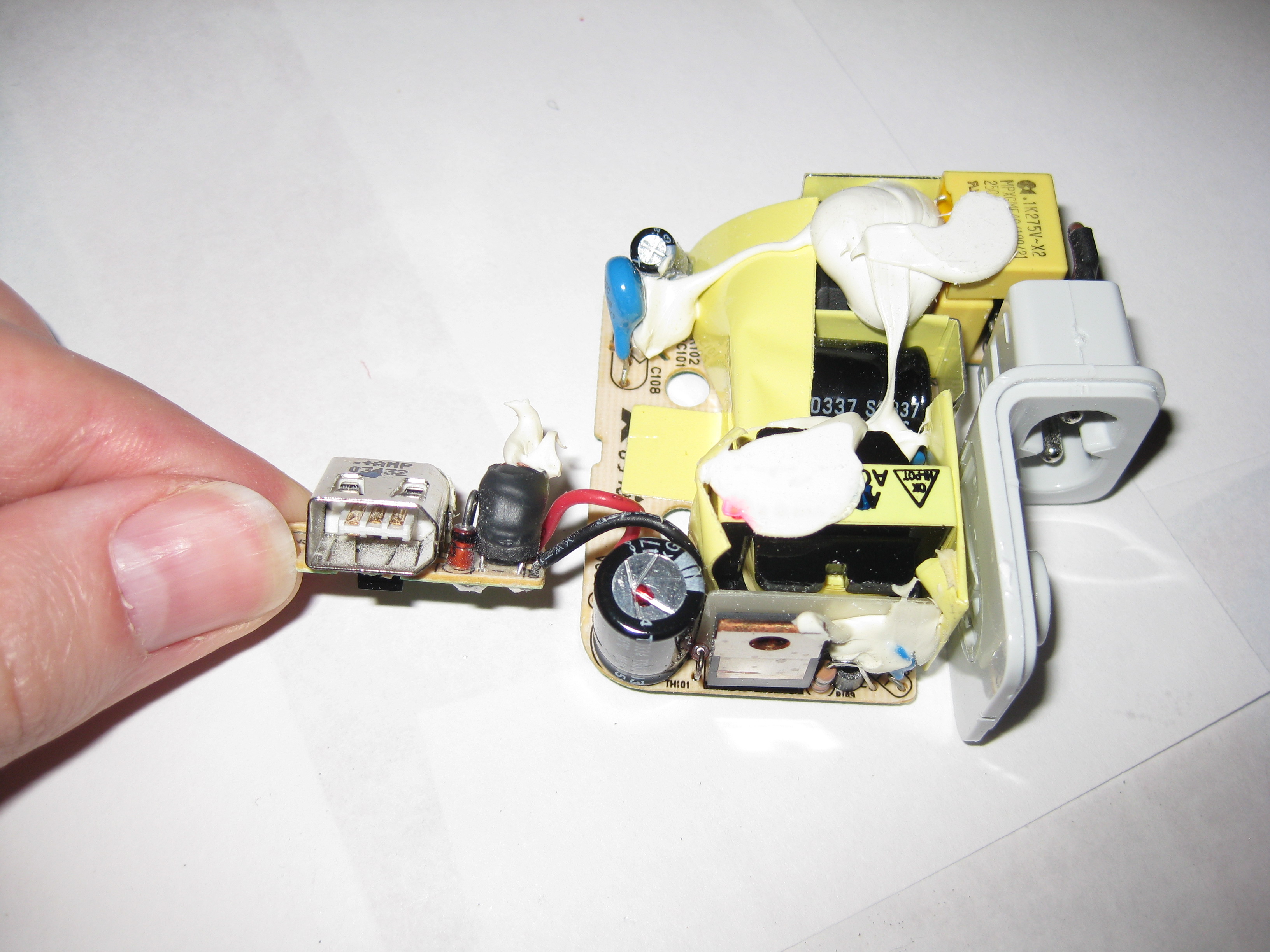 Another way to get power to the iPod is to pilfer the FireWire connector out of the iPod AC adapter. It's larger and considerably easier to solder to. Then, you just need to run a standard Dock-to-FireWire cable between the two. This has other advantages as well. More on that later. Note that those AC adapters really like remaining assembled. You will need power tools to open it, and it will not survive the process. There’s lots of great components in there to be desoldered and filed away for later use. My, what big caps you have! 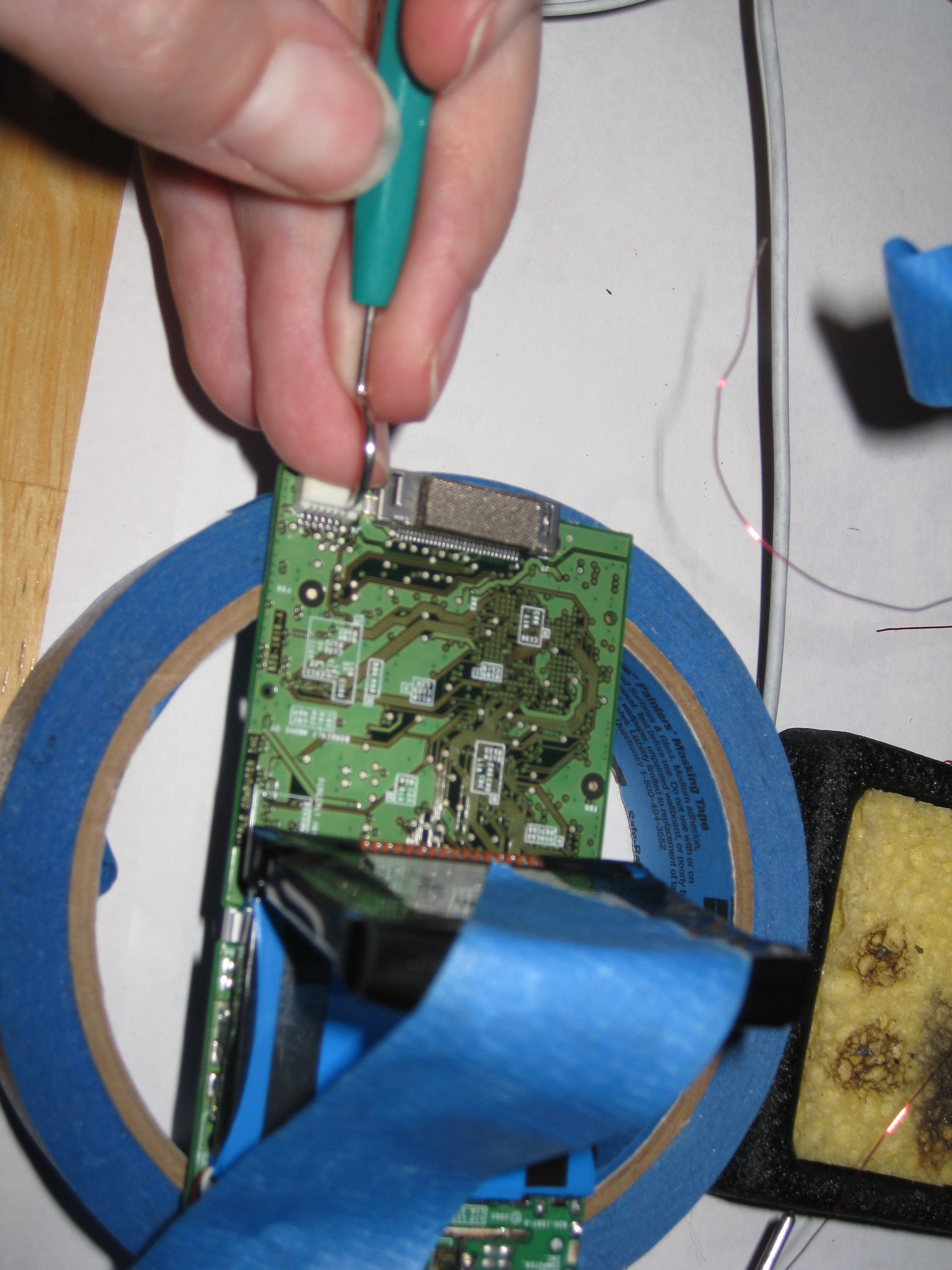 Lastly, we need a way for the horn button in the car to start playback of the MP3 on the iPod. The trick is to flash the iPod to a factory state, then put your MP3 sound file on it as the only "song". Then, pushing the Play button will play that sound start to finish, then stop. Exactly the behaviour we want. The hard part is connecting the horn button to the Play pin on the click wheel connector. The pin we want is second from the inside, on the back side of the connector. It's indicated with a pick here. Of course, an easier way to do this would be to buy a pre-wired cable with the matching plug (it's a standard Molex) and just plug it in. That would not be cheap though, and certainly less 1337 h4x0r than this way. 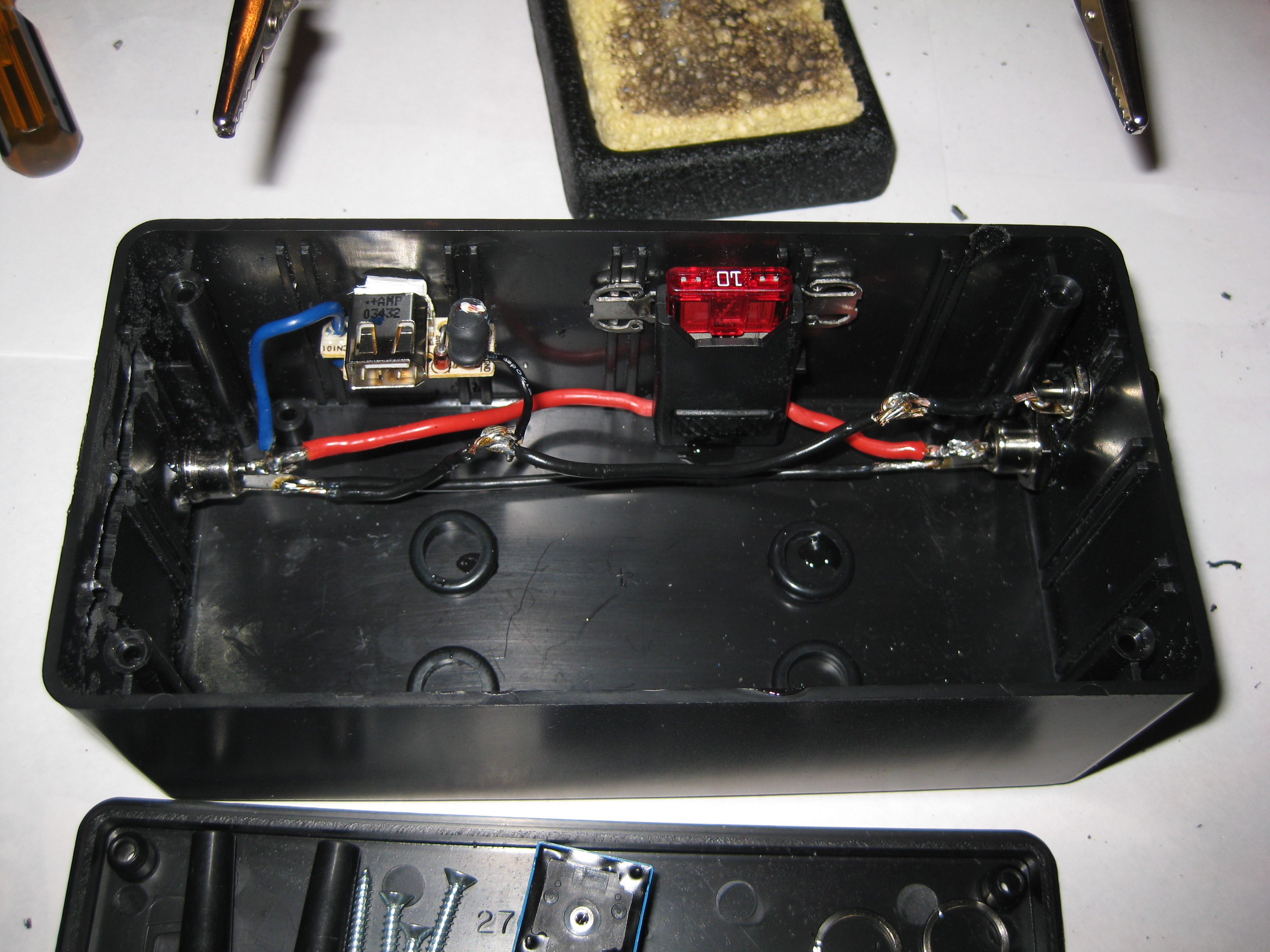 Here's the enclosure, ready for the iPod guts to go in. There's a power input on the right, with an inline fuse. The PA Horn takes 3A, and the iPod charging circuit is around 1A peak, so a 5A fuse should do the trick. The 10A shown is a placeholder. The power and ground connections go across to a power output on the left, for connection of the amplified PA horn. Also wired in after the fuse is the FireWire connector, used to supply juice to the iPod. Still missing at this point is the connector for the car's horn button, and the audio line-out from the iPod to the PA horn.

Here's the final device, mostly buttoned up and ready for installation. On the left, you can see the guts from the Dock, running from the PCB to an opening in the case. This provides external access to the Dock connector, so that you can load a different sound effect, if desired. It also gives us the audio line out for the PA horn to connect to. The white cable plugs into the FireWire connector in the case (top left), and then goes outside the case through a hole (bottom left) and plugs back into the exposed Dock connector. This gets power from the Fire Wire connector into the iPod, and also acts as a dust plug for the Dock connector. 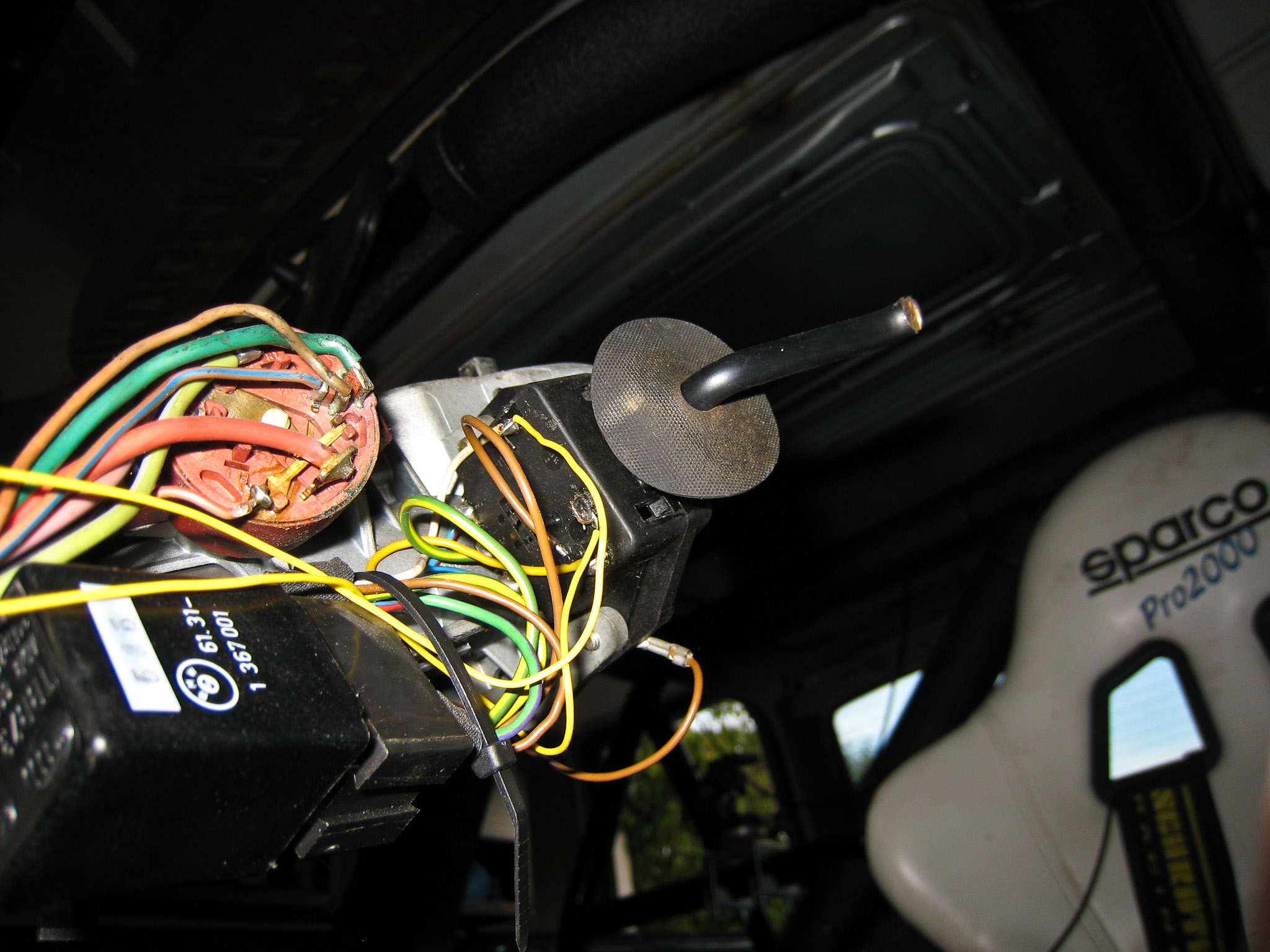 Rather than using the actual horn button (which our car no longer has) we opted to use the old high-beam flash switch, left over from when this was a street car. The thin yellow wires run over to the Horn connection on the T-In-A-Box (which is the wire we soldered to the play/pause pin on the iPod). 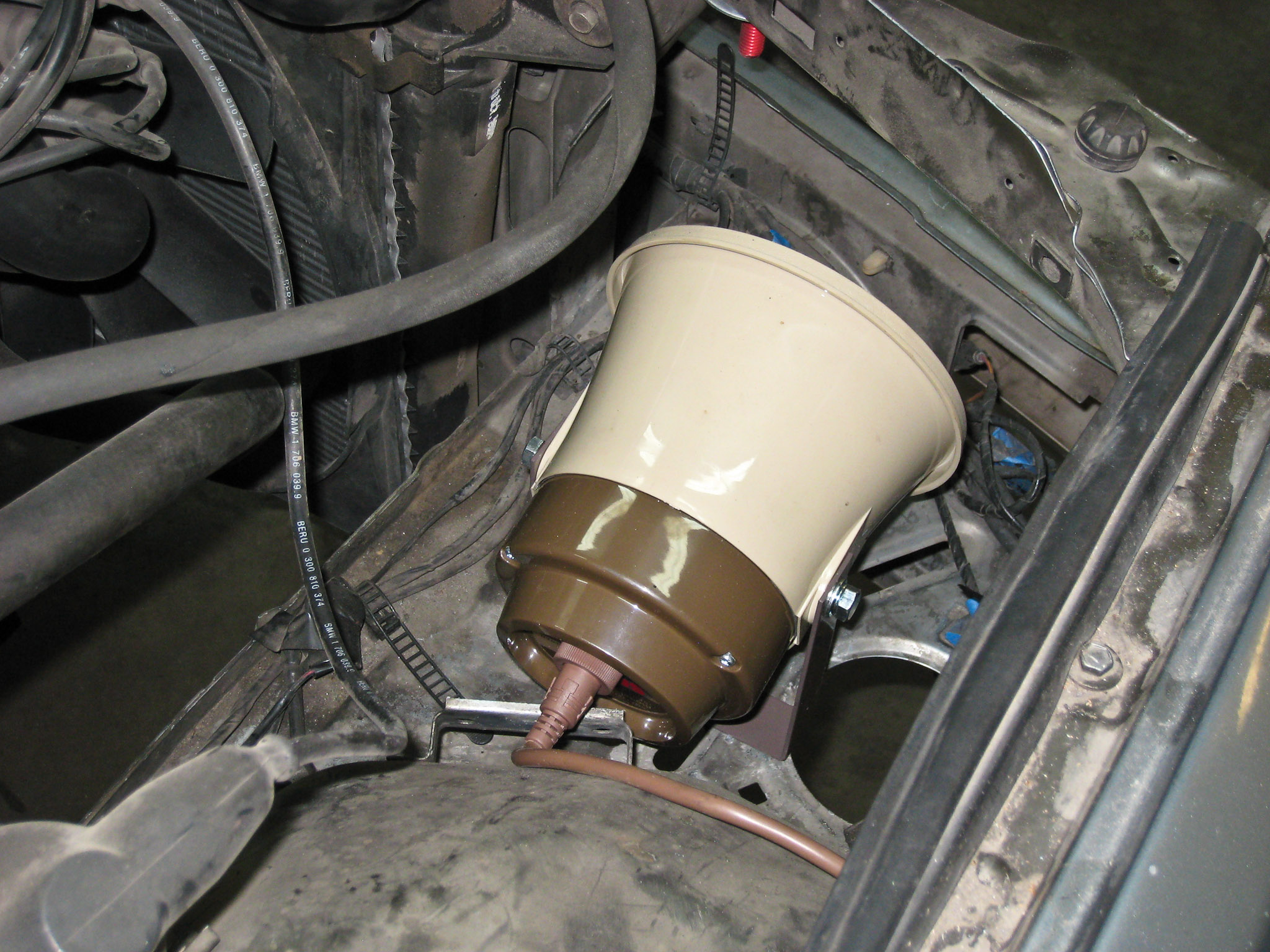 Here's the PA Horn, mounted in a handy spot where the factory headlights used to be. 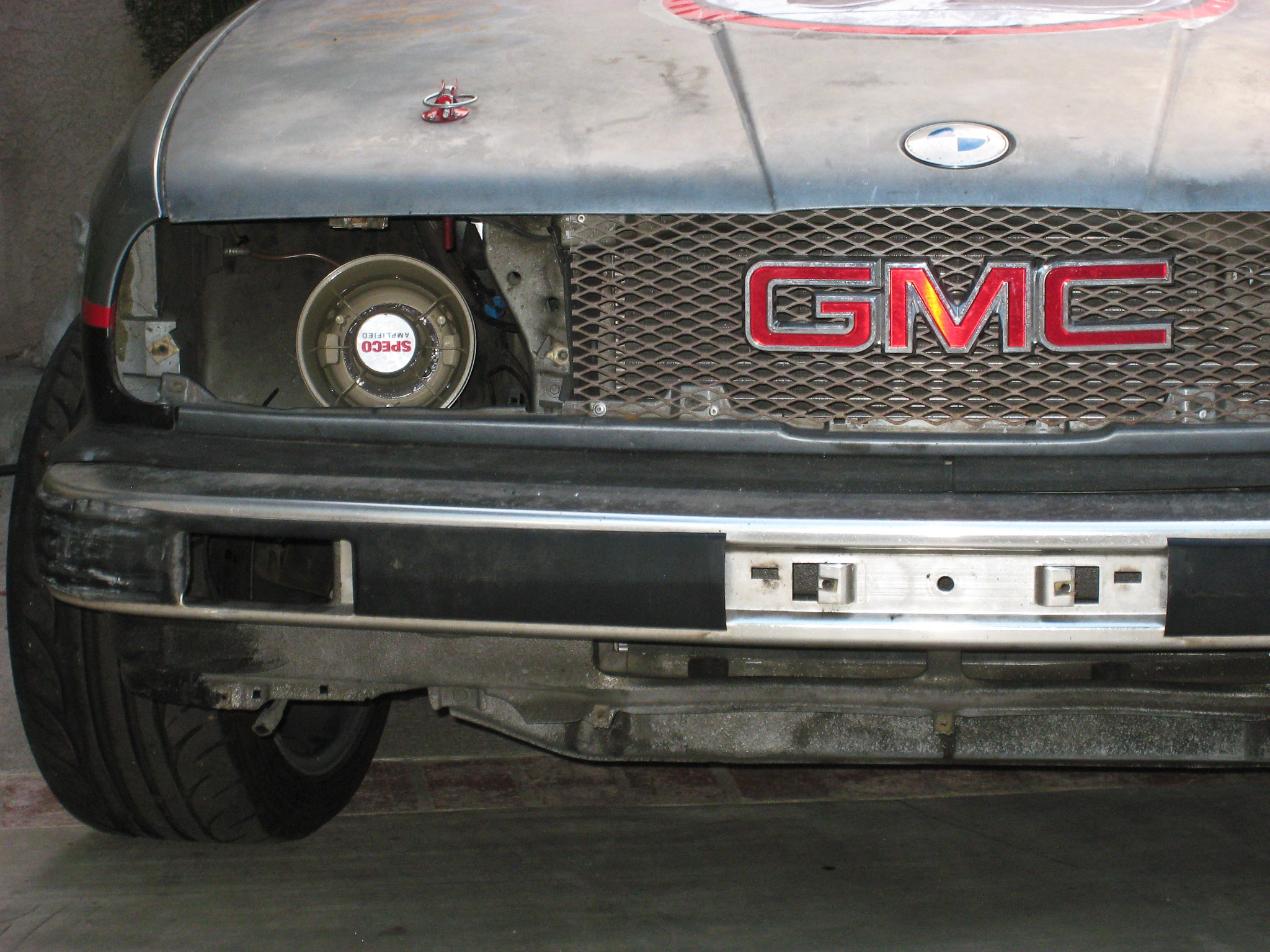 Here it is again, from the front. Yes, it's mounted upside-down. That was the way it needed to be for the wiring to fit. It's also more LeMons this way, and thus wicked. If you can ever read that logo normally, then we've had a very bad day.