Repair and improvement of a broken salad spinner.

This is another classic case of an otherwise well made product ruined by a single fatal flaw. My sister gave me this pull-cord-actuated collapsable salad spinner as a gift. I quite like the design of it, and it is very nice to use. However, after only a couple of months of normal use, the pull-cord broke. I contacted the company to try and get a replacement (since it failed so soon), but they ignored my attempts at communication. So I dug into it to see if I could repair it, and perhaps make it Betterstrongerfaster™.

The cord was strong nylon, but somehow snapped. How did this happen? Let's find out... 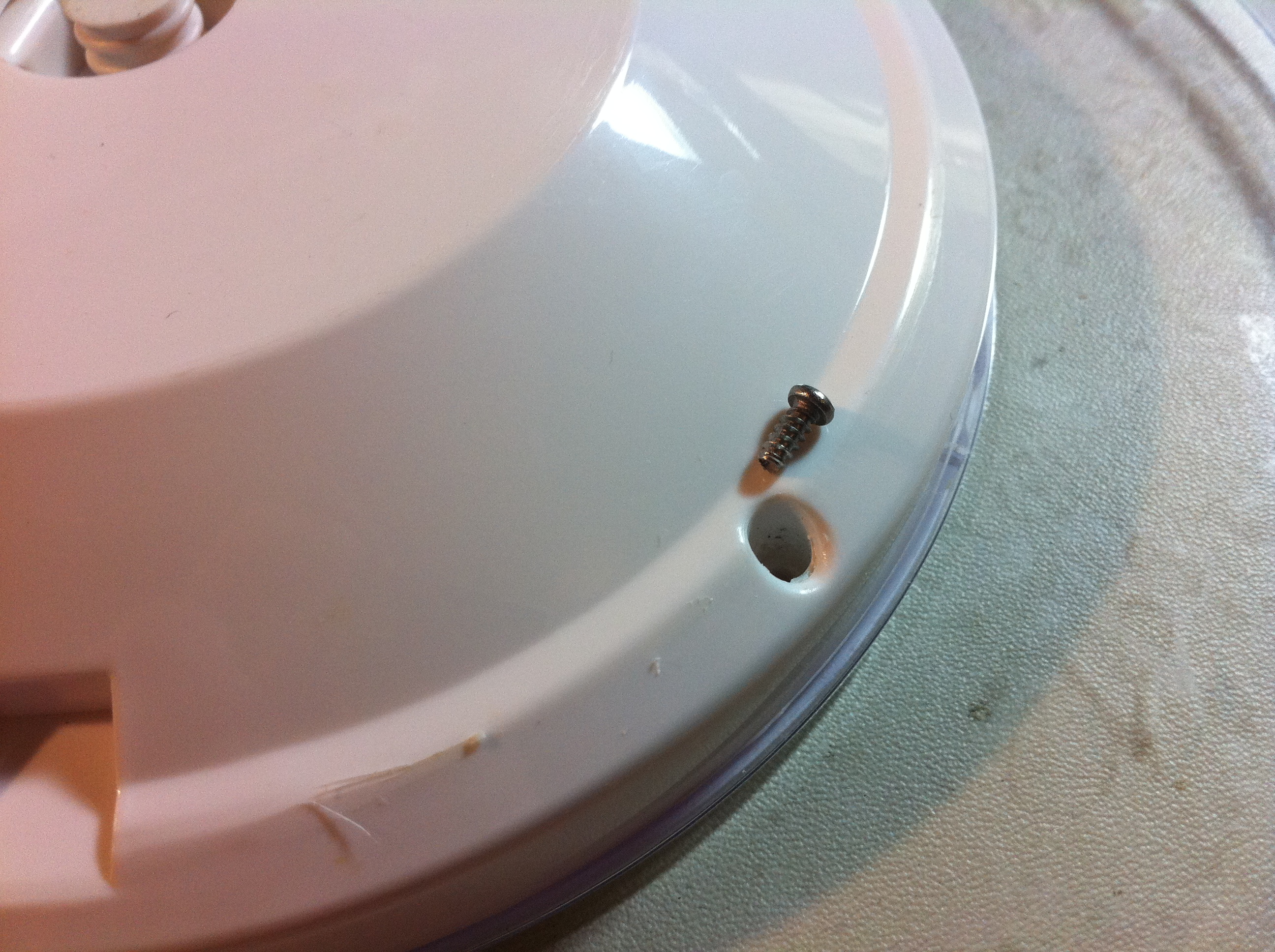 The underside of the spinning mechanism had four moulded plastic plugs that looked like they might hide screws. Drilling out the plugs, revealed... screws! Huzzah! This may be hackable after all. 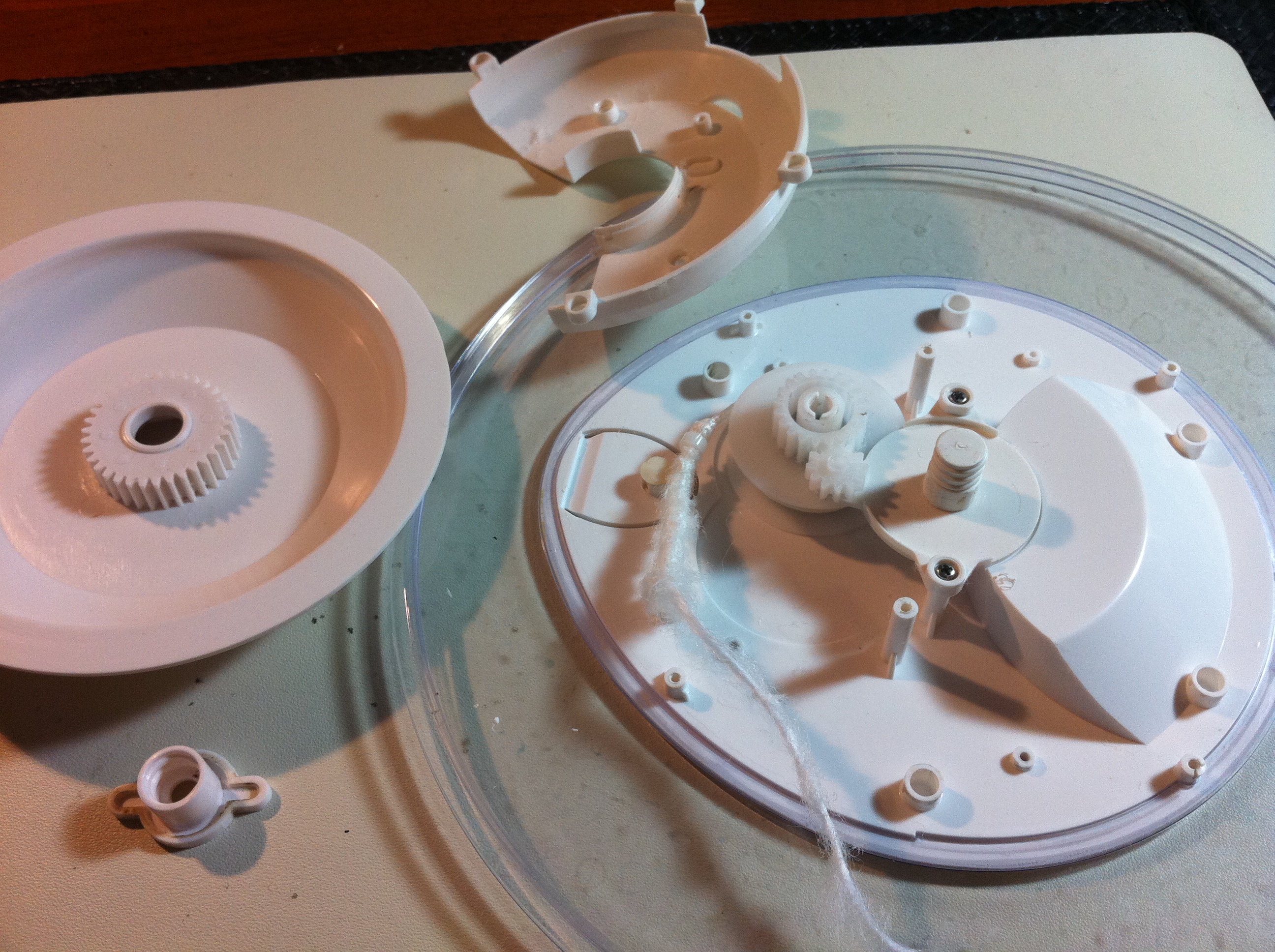 Under that cover was a geared bearing surface which slid off to reveal another screwed-on cover. Under that was the drive train for the spinner. It consists of a spring loaded cord winder geared down a bit to increase torque on the bearing surface. In between lies a slotted idler gear which allows the bearing to freewheel while the cord winder retracts. Clever! Here we can also see the shredded remains of the pull cord. No clue as to why it failed yet. 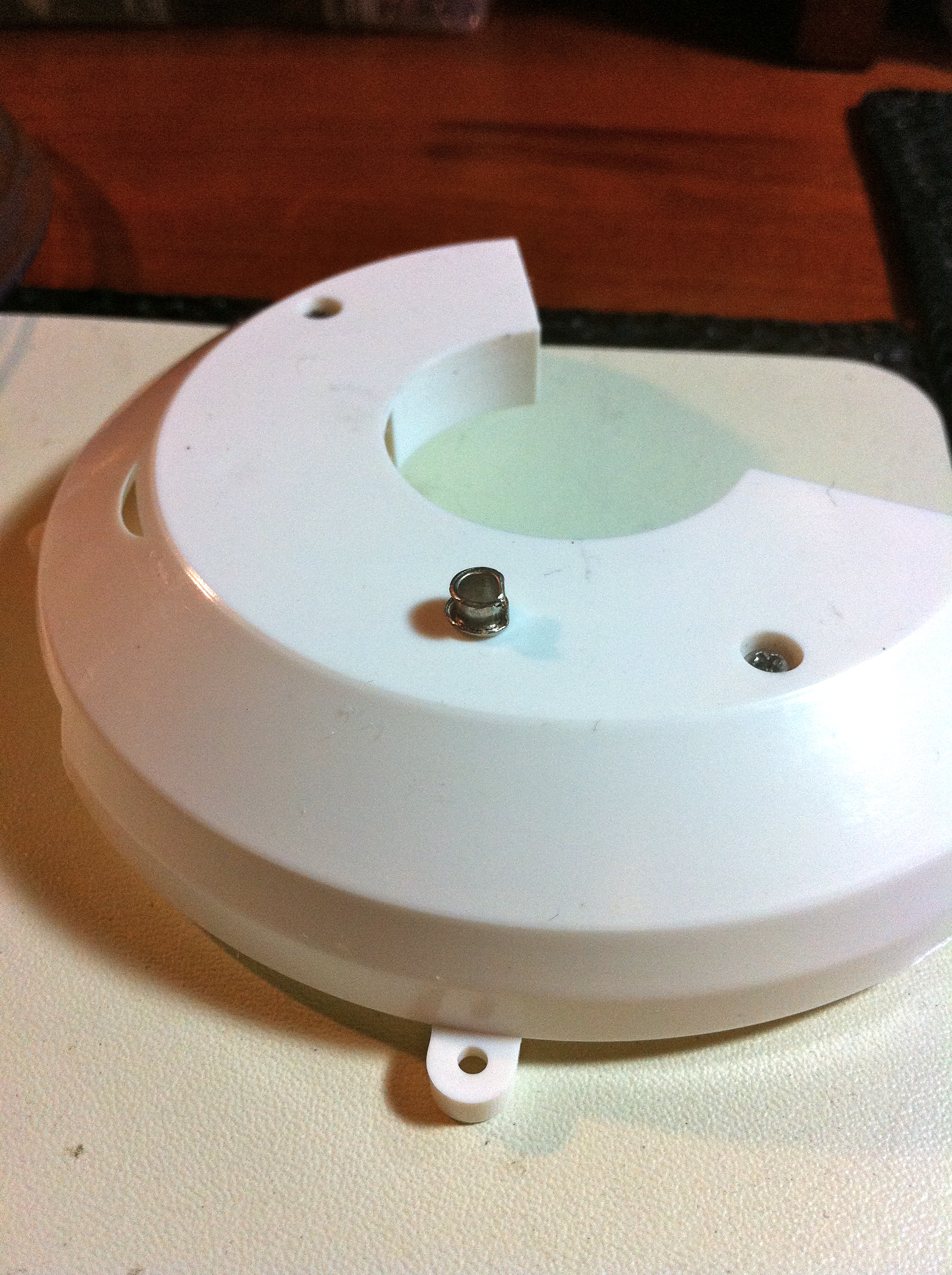 Further inspection of the cord's route through the mechanism revealed the flaw! To pass from the winder through the cover, the cord passed through a metal grommet. This grommet has a sharp edge that touched the cord. Over time, that edge was gradually shredding the cord inside the spinner, until one day it snapped. It looks as though the grommet was damaged during manufacture, hence the exposed edge.

So, with the point of failure identified, the question becomes whether we can fix it and make sure the failure doesn’t recur. First, of course, I pulled out that metal grommet. The hole is smooth plastic, and the grommet was certainly doing more harm than good. Now, what to replace the cord with? 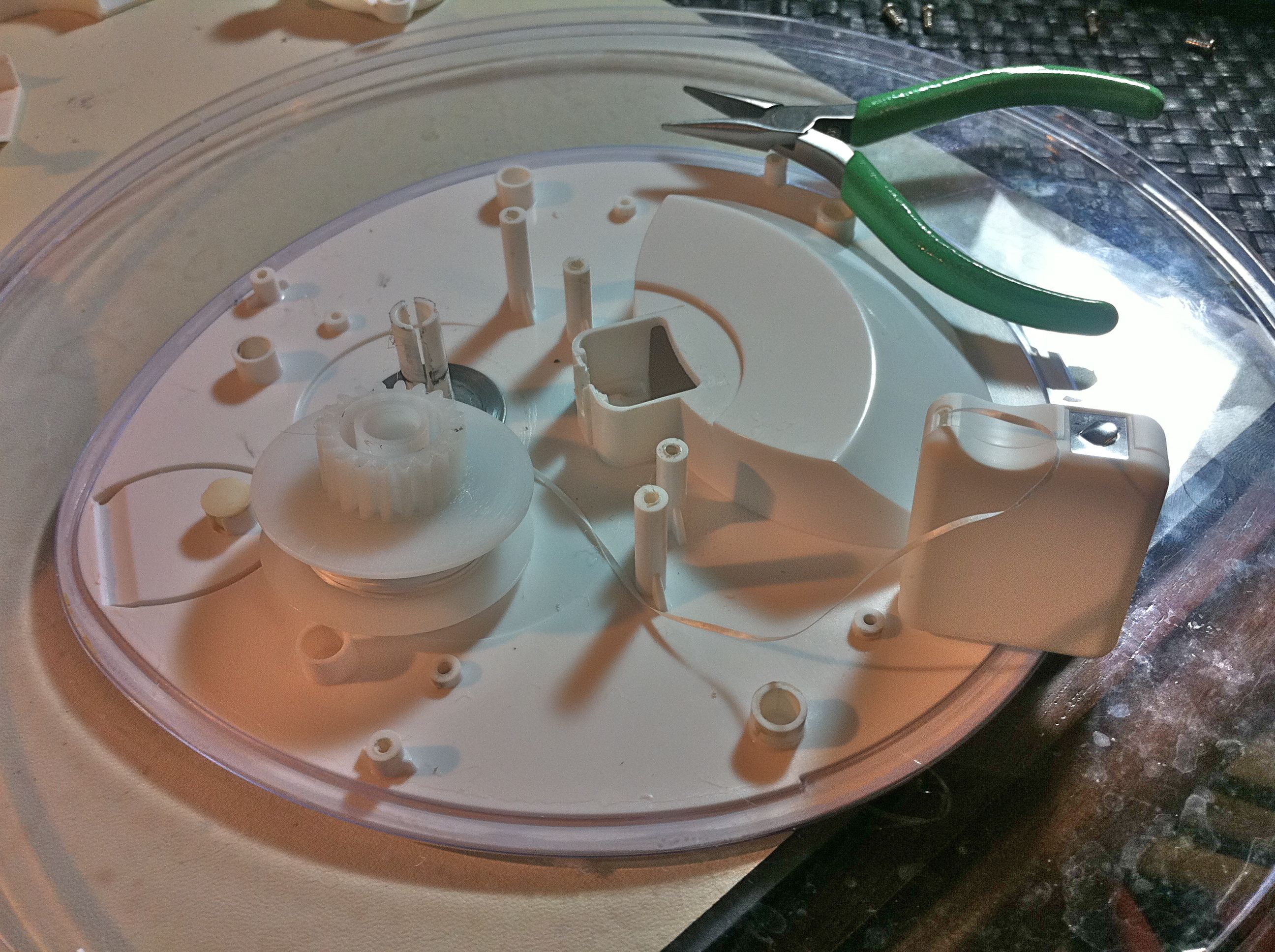 My first attempt was to use dental floss. I've always been impressed with the tensile strength of dental floss, and it winds and unwinds very smoothly. So smoothly, in fact, that the spinner operates at a considerably higher speed than before. 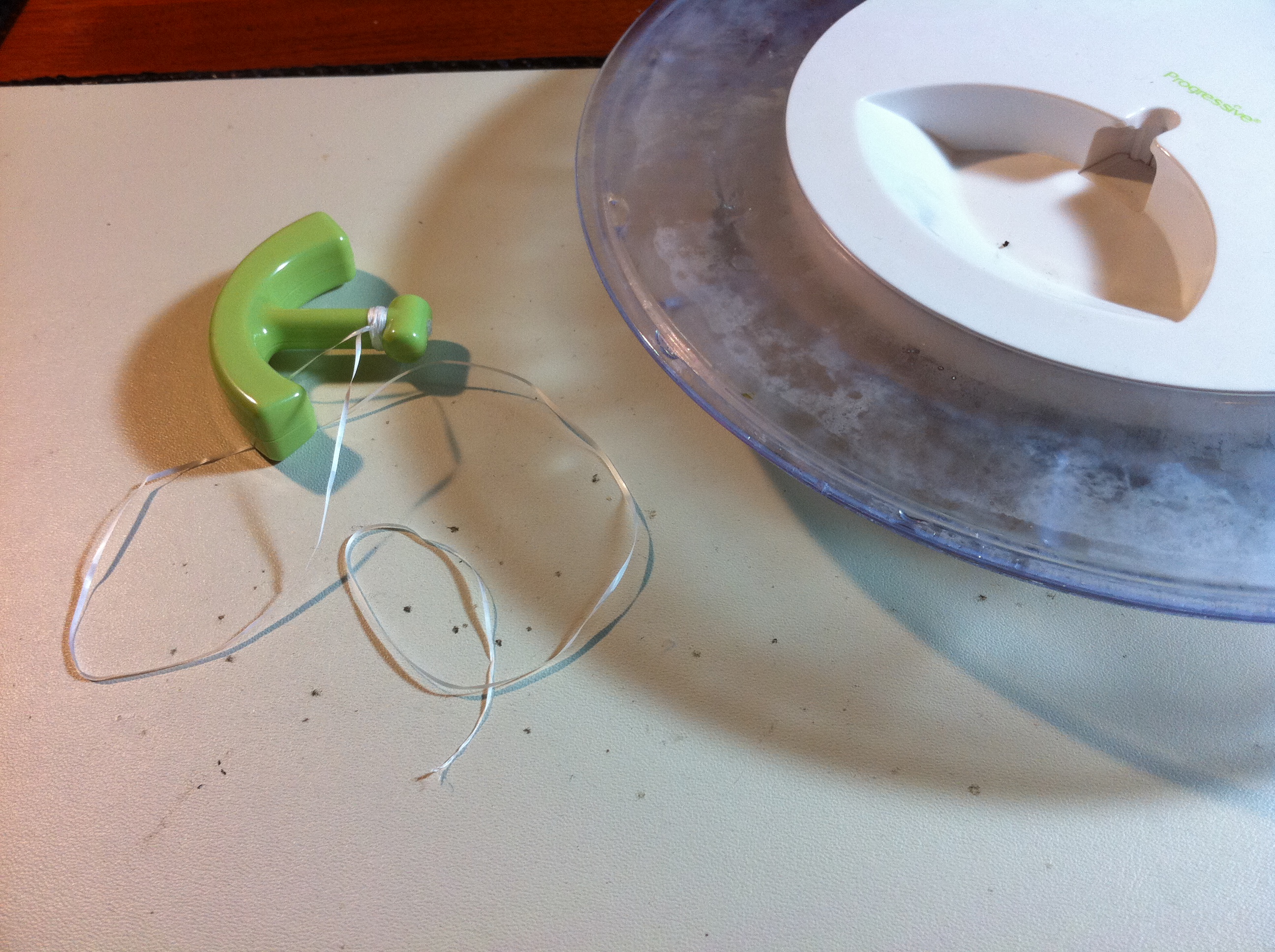 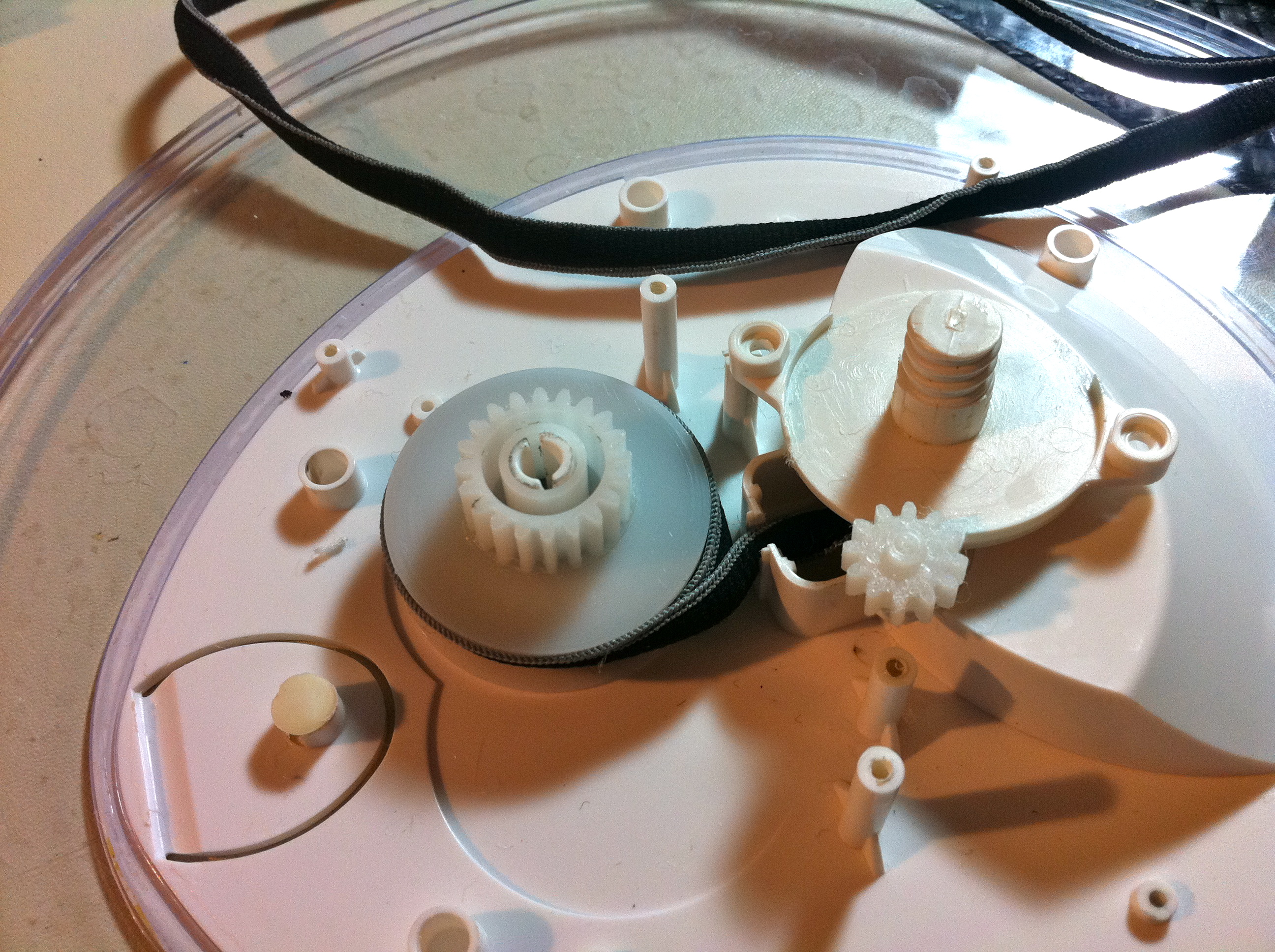 My second attempt was a shoelace. These are also very strong, and I had extras lying around. Sadly, it was a bit too thick, and the winder didn't spin smoothly with the shoelace wrapped around it. 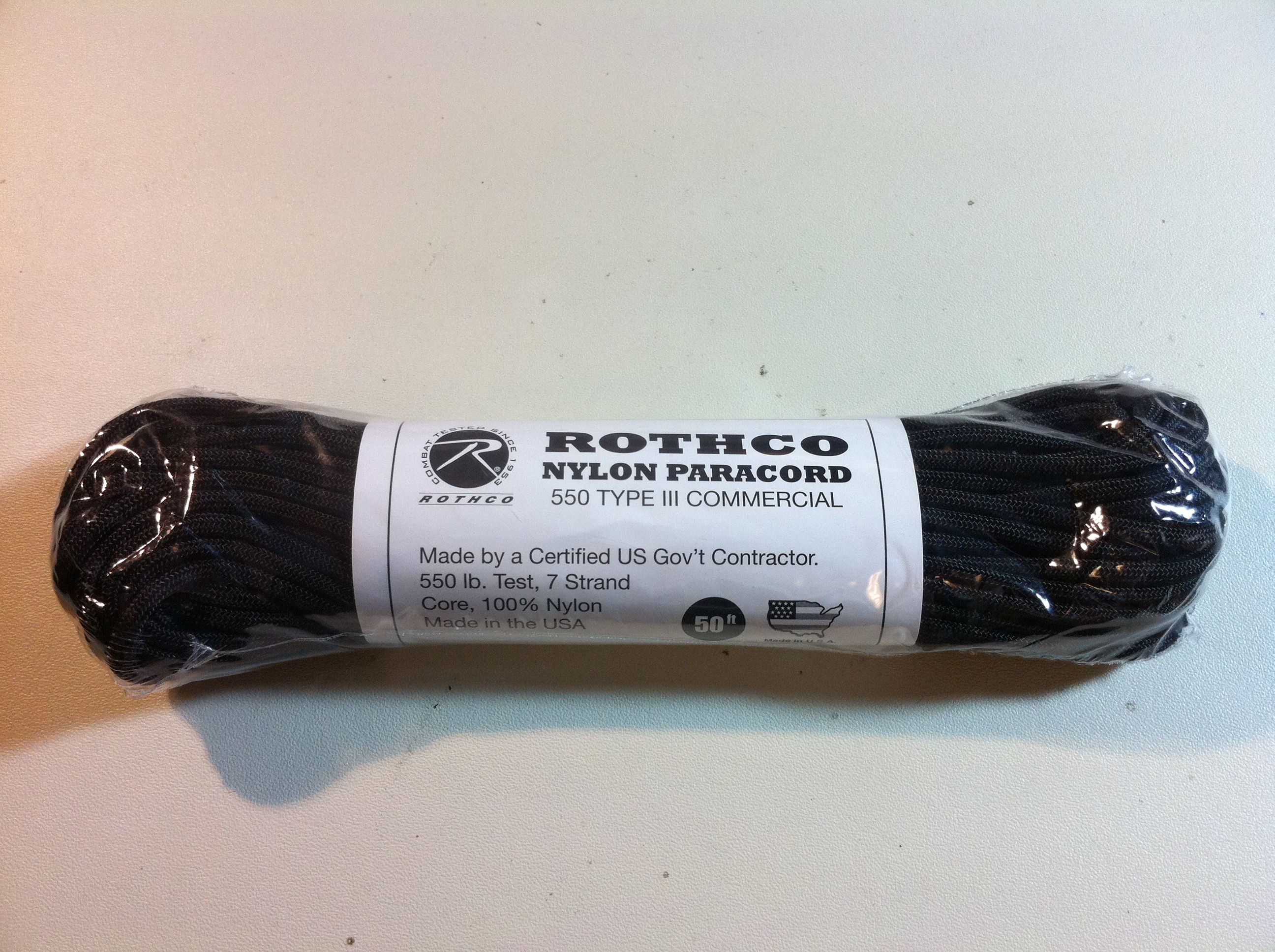 Alright, time to get serious. If 550lb parachute cord doesn't hold, I don't know what will. This stuff is really cheap, actually. Less than 10 cents/foot. Good to have around! This cord is also a bit too thick for the winder. However, paracord is actually several smaller strands housed in a sheath (the black outer coating). You can cut the sheath, and use as many of the smaller inner cords as you need. Three strands seemed about right. 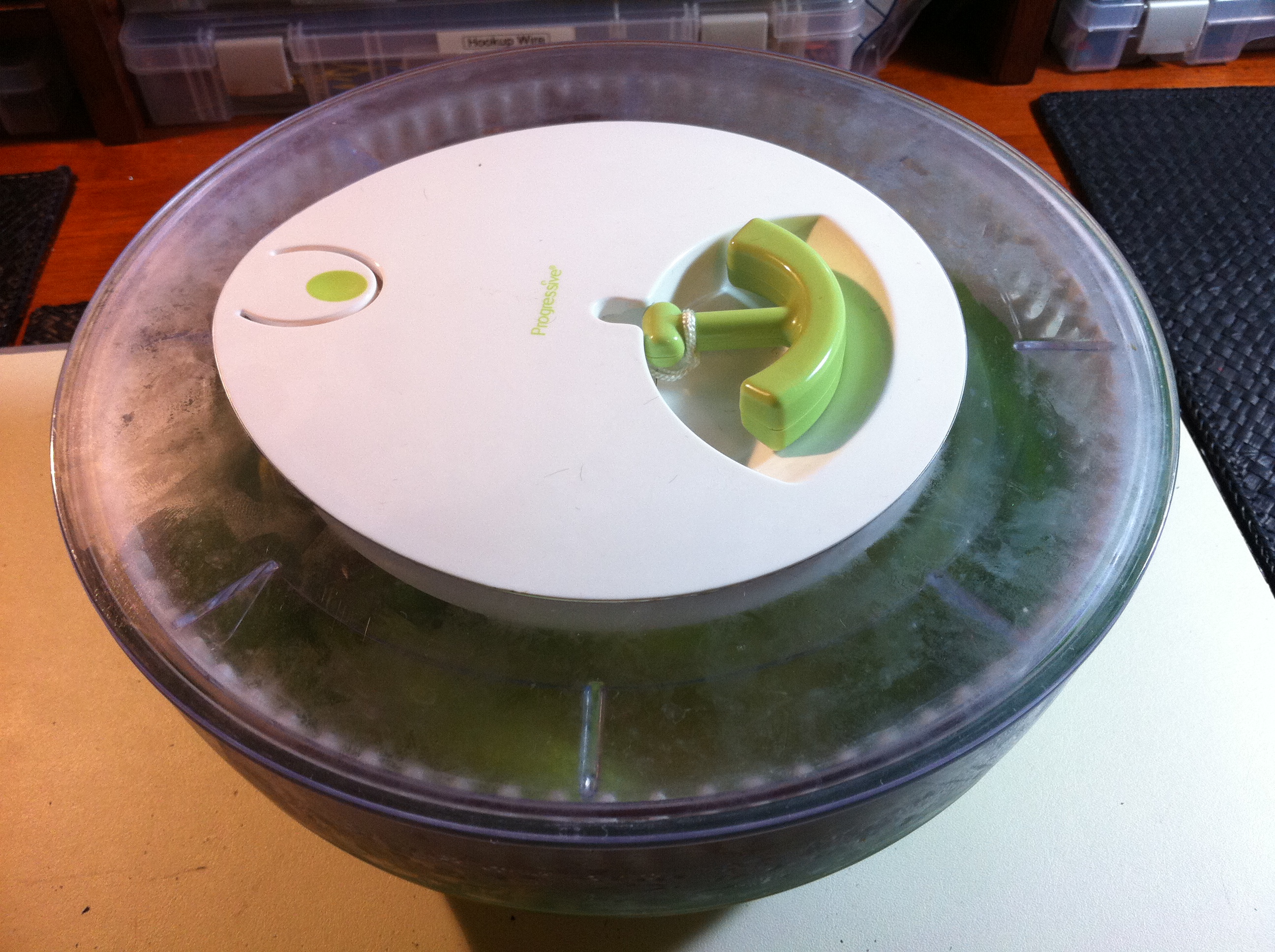 Success! I knotted the other end of the cord around the handle, and put a drop of superglue there to hold the knot. Here's the reassembled unit (shown here with lettuce installed). So far it's performing very well, and should extended the life of this tool by many years.

You learn a lot about a product when you take it apart. You might think that the premature failure of this tool made me dislike it, but in fact the opposite occurred. By dismantling it, I saw how well made it actually was. The plastic was sturdy, everything was held with multiple well-placed screws, and the gear train was clever and robust. It was just a tiny manufacturing flaw in the grommet that caused the failure, and that sort of thing is frankly bound to happen. If only their customer service had been better.

What’s next for this intrepid spinner? If the cord fails again, I expect electricity may be involved in the subsequent version…