Here’s a first for Blondihacks- reader mail! I’ve been doing this blog for many years, and have received a lot of very nice feedback. Thank you all for that. Once in a very long while, a reader goes above and beyond and sends some stuff my way that they think might help out the blog. Such was the case with reader Paolo in Sweden, who decided to send a care package my way with all kinds of retro goodies hiding inside. Let’s dig into it! 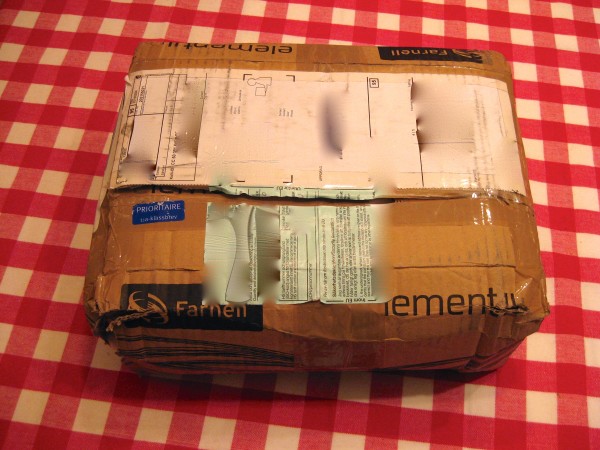 Here’s the actual package, all the way from Sweden. The poor thing looks like it was used to shore-up a retaining wall in Nigeria for a while, before being given to US troops in Afghanistan to use as a footstool. When they grew tired of it, it was sent to an orphanage in Brazil to be used as a soccer ball. At some point after the orphans grew up, got married, and had children of their own, the post office decided maybe they should deliver it.

Luckily, the stuff inside was very well packaged. As far as I can tell, everything survived, despite the various countries’ postal services’ best attempts to murder it. Let’s get inside! 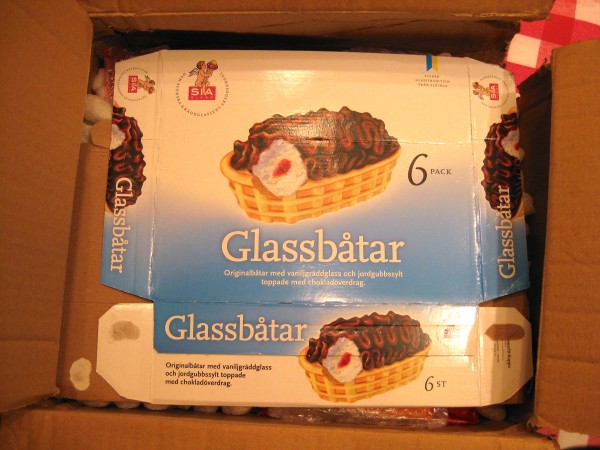 Not what you expected, I bet? Me neither.

First rule for getting your package featured on Blondihacks: include something weird as the packaging. This is either a Swedish ice-cream-based dessert food, or possibly an anatomical diagram of the inside of a Chihuahua brain, sitting in a basket. You decide. The name sounds like that thing I yelled right after dropping a snow globe on my foot back in ’89. I still have the scar. 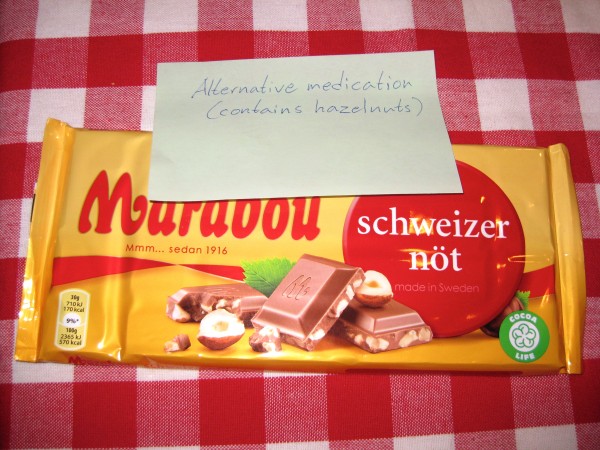 Second rule for getting your package featured on Blondihacks: include some form of high-quality milk chocolate. The “high quality” qualifier will seem strange to non-Americans, since outside of this country, all chocolate is good. America has something called “Hershey’s”, which is made from sour goat milk pumped out of the sewers underneath a hog rendering plant. Sadly, half of that sentence is true.

Third rule for getting your package featured on Blondihacks: make a clever reference to a recent post- in this case to my proclivity for getting unofficial sponsorship for my projects from the fine folks at Buffalo Trace bourbon. 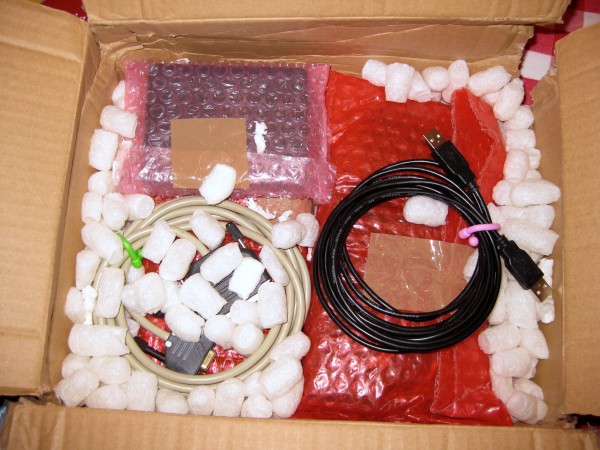 Now we’re getting to the meat of it. I see cables. Old cables. Also mysterious black boxes of indeterminate origin. Nothing is ticking, so I’m going deeper. 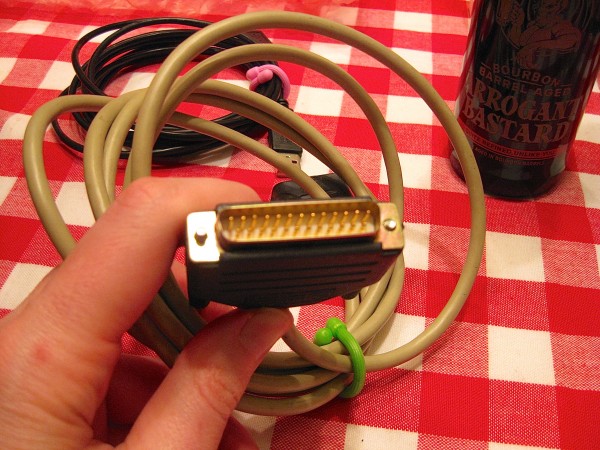 Remember when PC serial cables had 25 pins for no earthly reason? I never heard a good explanation for why a standard involving ground, two handshakes, and two data signals needed twenty-five gorram pins on it. Other early computers used five-pin connectors, and got along just swell.

Before you spool up your angry commentin’ keyboards, yes I know there are a lot of other signals that some devices used on PC serial cables. Still, it’s a messy and excessive implementation of the standard, if you ask me. Now you know why people don’t ask me much. So much anger over things nobody cares about anymore.

Huzzah! Now we’re getting into some sweet retro goodness. Those are, of course, 32kx8 bit EPROMs. As regular readers of my blog know, I’ve been playing a lot with EEPROMs over the years. These are nice because, being 5V erasable and programmable, they’re easy to work with in hobbyist projects. I built an EEPROM programmer into Veronica, and I recently built an EEPROM programmer to customize my Apple IIc Plus retrocomputer. The disadvantage to EEPROMs is that they are not pin-compatible with the equivalent factory-made mask ROMs you would find in actual consumer hardware. This means that, for example, with my IIc Plus customization, I had to come up with an adapter socket to map EEPROM pins to normal ROM pins.

The point of all that rambling is that I’ve been meaning to get more into EPROMs, for the convenience of using the chips directly. Paolo read my mind here, and threw some in. But wait, there’s more… 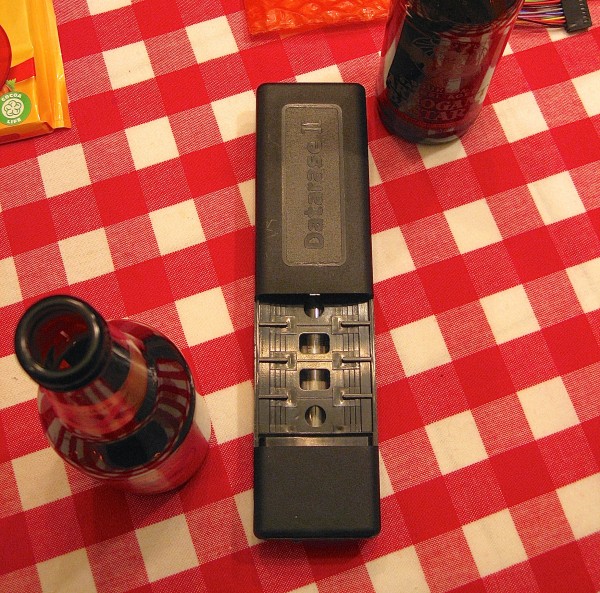 Let there be light! UV light, that is.

As you probably know, EPROMs have an adorable little window right over the die, because you need to expose them to UV light to erase them. That means you need a UV light source and a way to direct those sunburning wavelengths directly into the chips. It’s possible to build such a device with UV tubes or LEDs, of course, but this nice little unit will save me the trouble. It didn’t come with a power supply, but all the best toys are actually projects in themselves, so I don’t mind one iota. I still need a way to program EPROMs, however. They generally require somewhere between 8-15V to write, which means the programmer needs to supply higher voltages somehow. My little homemade USB programmer is driven from the 5V on the USB port, so this might require an external power source to be added to the design. Possibly a buck-boost converter could be added to supply the higher voltage, but I haven’t experimented with that yet.

In any case, once again Paolo may have saved me the trouble. Behold the rubber-buttoned glory of this thing. 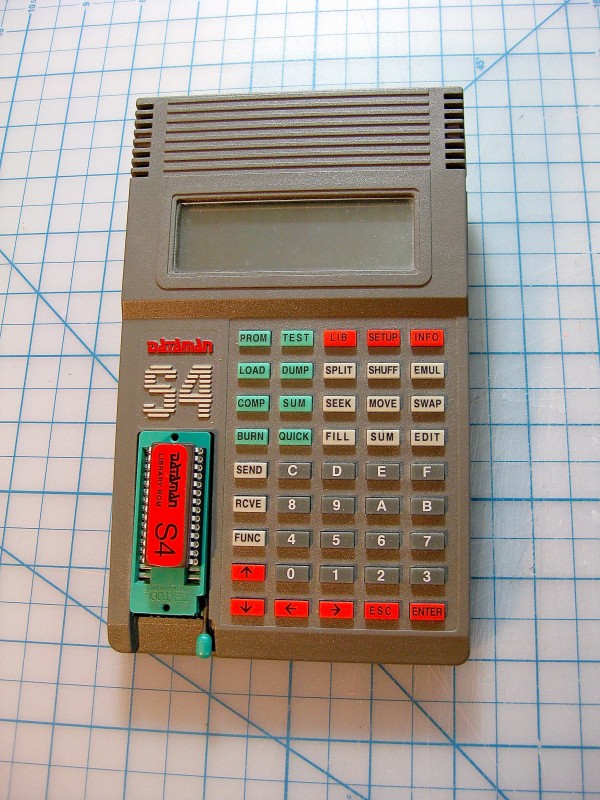 This appears to be the Dataman S4, a “universal” PROM programmer and ROM emulator.

It has a vintage look, but it still seems to be supported quite well, and documentation is readily available (PDF warning).  Like a lot of these sorts of niche tools, the software is only available in DOS and Windows versions, but it appears they have kept it up to date as far as Windows 7. The manual says it was last updated in 2005, so that’s not bad at all. Looks like a really nice device! I’m a Mac user, so I’ll be experimenting with Parallels and/or WINE to get the software going. As much as I might like to add EPROM support to my homemade programmer, this thing is pretty sweet looking. It’s going to take a lot of digging through documentation and software to figure out what all this thing does. It appears to be battery-powered, but there’s no power adapter. No problem- just another project!

As if that wasn’t enough, this package held one more awesome goodie. 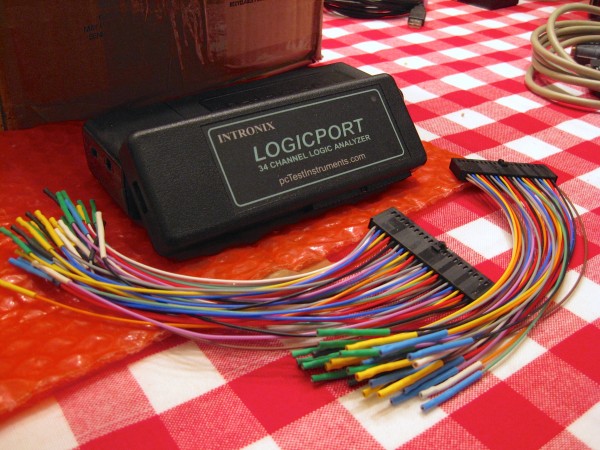 A LogicPort USB logic analyzer! How about that!!

I’ve been wanting to toy with USB logic analyzers for a while, but two things have held me back. First, the software is always Windows-only. Second, I’m really, really, remarkably cheap. Getting one of these donated to the blog solves the second problem. The first will be solved with emulation.

This was a fantastic care package from a reader, and rest assured everything here will go towards many future hacks. If you have some weird vintage crap lying around, or have a spare tool or two to donate to the blog, drop me a line! In addition to my Patreon, donations like this are always much appreciated. A care package even makes a great post unto itself, when the stuff is as interesting as this. Cheers, Paolo!