The cracks are starting to show.

My elliptical cardio machine has made so many appearances on this blog so far that it practically deserves its own section at the top of the page. If you’re a long time reader, you’ve seen me convert it to wall power, make new pedal rollers, and make new feet. There have also been couple of other repairs that I didn’t bother blogging. Well, this time around we have genuine structural failure! Things are getting interesting as this machine enters its fifteenth year of hard service. We’re probably ten years past the point where a person could get parts for it, so keeping it going becomes an ever-more-interesting fabrication challenge.

The machine has been running great for quite a while now, ever since I made new feet for it from Furisoa-grade steel. However, I was doing my usual workout the other day, when I looked down and noticed something moderately alarming. 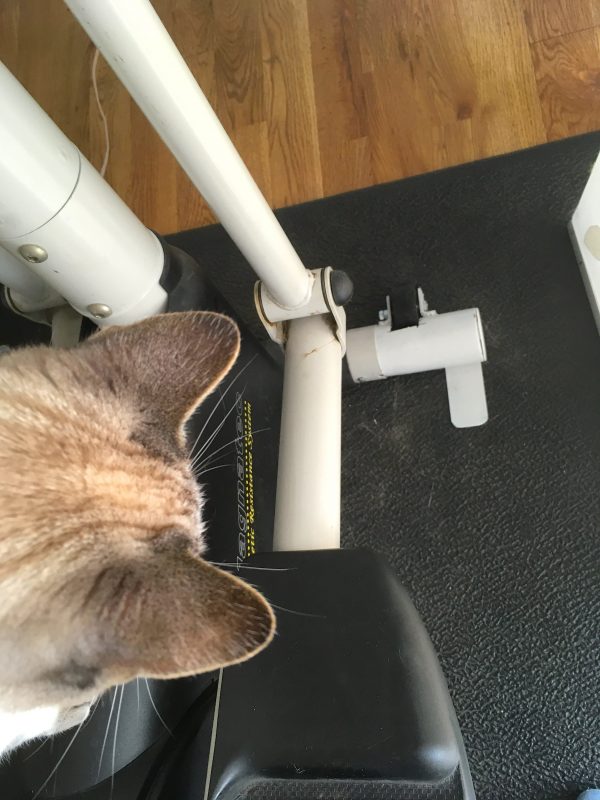 Look at the far end of the foot-pedal pipe, where it joins to the vertical pipe. We have quite an impressive stress fracture in the steel there. Cat head for scale.

While it would be exciting to keep using the machine until that failed completely (and what a spectacular failure it would be), I decided to go ahead and arrest this damage right now. First things first, we need to get that component out of there. 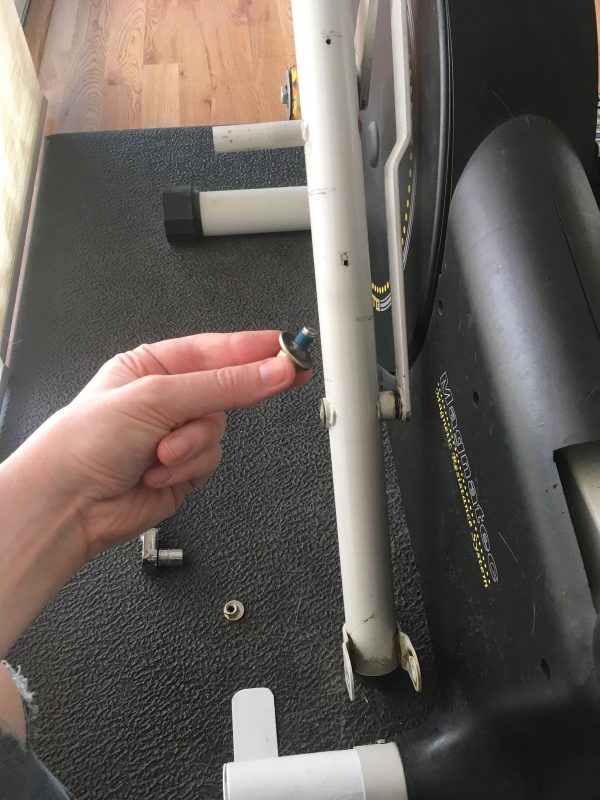 The machine is pretty easy to disassemble. A couple of 13mm bolts and one locking nut. They are generous with the thread-locker on this thing, which I appreciate.

Luckily that component is easy to remove. I don’t fancy dragging the whole machine into the shop and having to work on it that way. 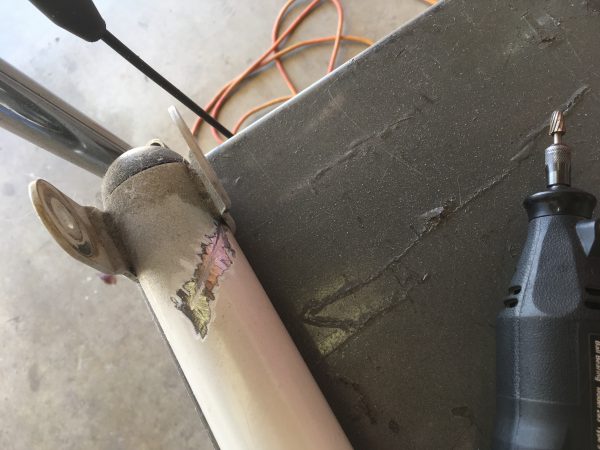 With the piece on the bench, I can now get a closer look at the situation. Step one, get that pesky paint of the way.

The crack appears to be running from the weld joint of that bracket backwards. That stands to reason- there’s a lot of stress right there as the energy of the arm-levers is transferred to the foot pedals and vice-versa. The bracket is much heavier steel than the tubing, so the tubing is going to flex at that welded joint. Flexing means failure, sooner or later. I used a die-grinder to dig out the crack a bit so we can fill it in with weld and get some strength back in there.

Stress fractures have a very interesting property in that they can be stopped in their tracks by drilling a hole. This effect is easy to visualize. Imagine a sheet of paper with a 2″ hole in the middle of it. Start tearing the paper with two hands, such that the tear moves towards the hole. What’s going to happen with the tear gets to the hole? The tearing stops and now you’re just bending the paper with your hands. The hole creates a relief point by introducing flexibility. The fracture can’t progress past that point as a result. The same effect works in steel. 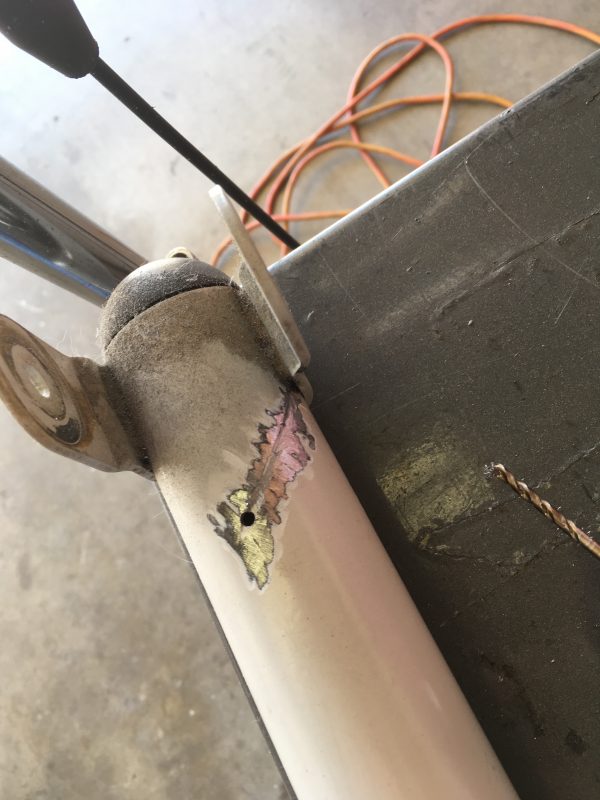 I center-punched and drilled a small hole right at the end of the crack. We’re going to weld all this up anyway, but in case my welding isn’t very good, this is good insurance against the crack spreading.

Okay, the site is prepped for welding, now it’s time to set up to do the deed. We need to know what kind of material we’re working with here in order to set up the welder properly. If in doubt, the welder probably has a chart in it with suggested power levels and wire feed rates for different thicknesses of steel, and whether you’re doing flux-core wire or gas-shielded welding with regular wire.

This is a very straightforward welding task, so it should be no problem. “Should” is the operative word there. If everything went well, this wouldn’t be a Blondihacks post, right? 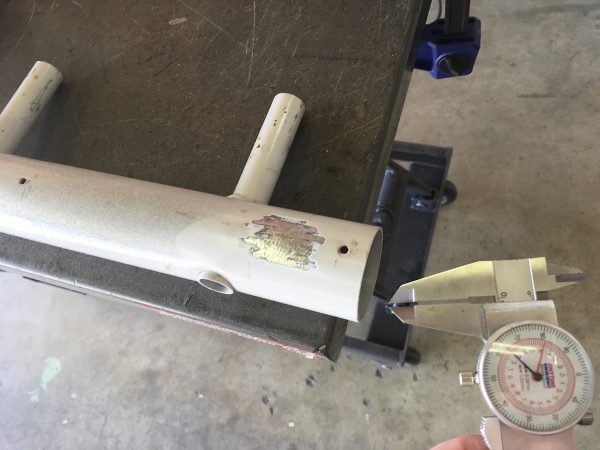 The caliper tells me this is 16ga steel, which is quite a bit lighter than I’m used to working with. This will be a challenge. Also note that I’ve removed more paint at this end for the ground clamp.

This is much thinner material than I have much experience with, so I consulted the chart on the welder to see what it suggested. They recommended a power setting of 4 (middle of the road) and a very slow wire feed of 12. After a few tests, I decided that was much too slow of a wire feed for my taste. I know what I’m doing and don’t need some chart to tell me how to weld, dammit. So I turned up the wire speed, and immediately blew a giant hole through the piece. 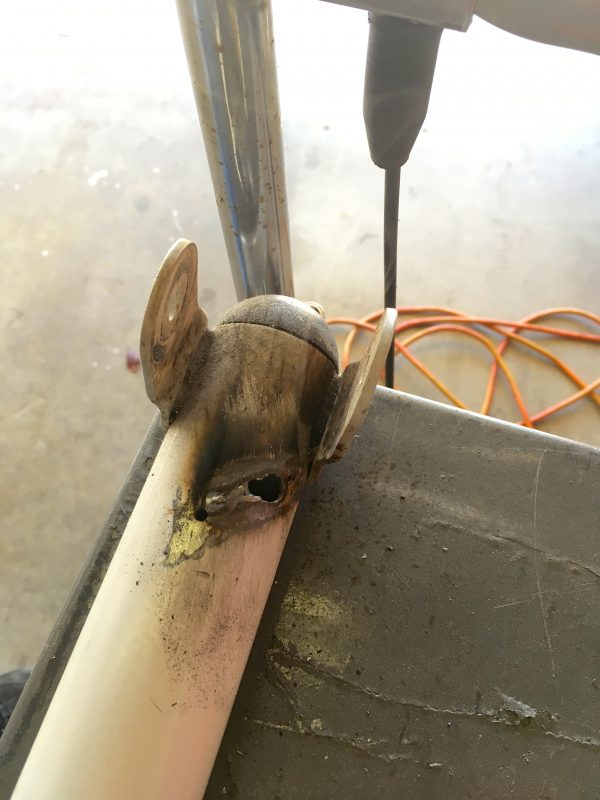 Well, that didn’t exactly go to plan. Maybe that chart on the welder was on to something.

Right. Anyhoo, there’s no need to panic, because with steel all things are fixable. That’s a larger hole than I’m comfortable filling with weld alone (especially on such thin material), so I decided to use some filler stock. 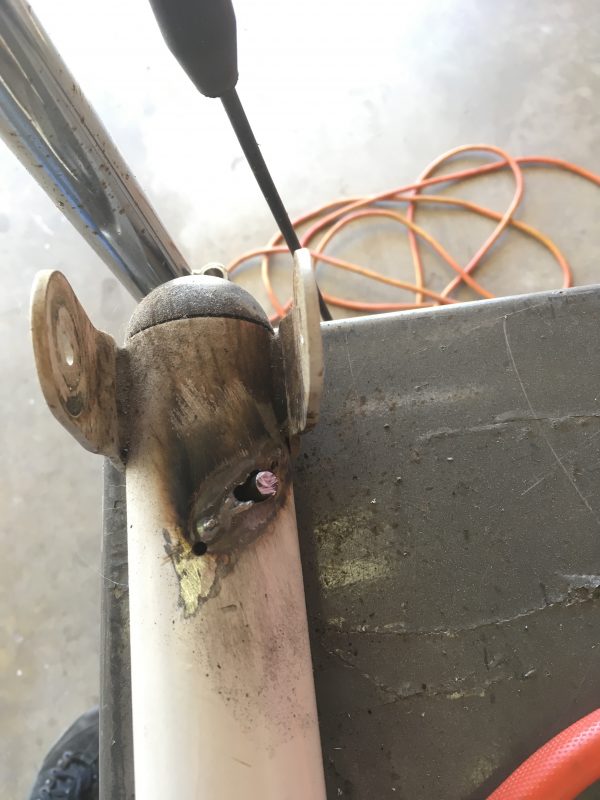 The junk pile produced a scrap of 1/4″ round bar, which I used to fill the worst part of the hole. The rest I was comfortable filling by laying down a couple of careful passes.

A few layers of welding later, and we have all the cracks and holes filled. 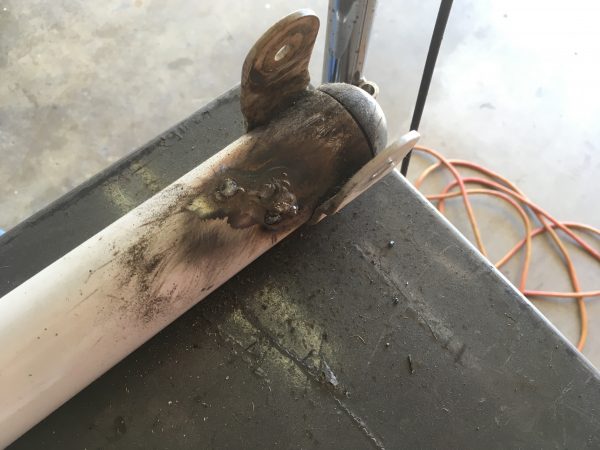 Yes, that’s right- I’m putting what is probably the worst series of welds I have ever done on the internet. Go ahead and laugh at me, armchair experts. But hey, I’ve never claimed to be a great welder, and this certainly got the job done.

Someone smarter than myself once said that editing is to video as grinding is to welding. The nice thing about being a lousy welder is that I’m damn skilled with a grinder. Funny how that correlates, isn’t it? 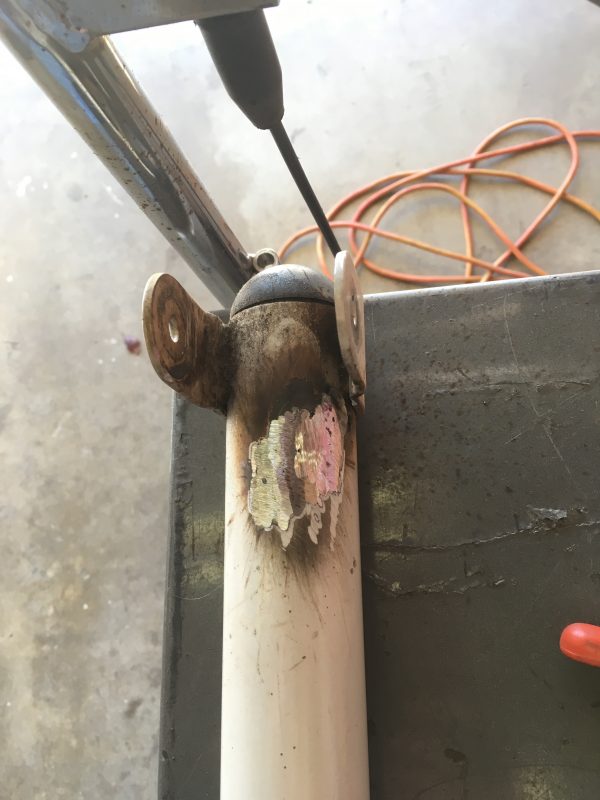 Lots of grinding and a little more filling later, and we have what might pass for a pretty decent repair! We’re basically done. Or are we. Dun dun dun.

While cleaning up that repair, I noticed that I had neglected to remove the plastic cap in the end of the pipe. I should remove that and make sure I didn’t melt it with the welding. Good thing I did, because you won’t believe what happens next. That’s not clickbait because you already clicked to get here and all you need to do is scroll at this point. I guess that makes it scrollbait. Scroll down to find out what I found! Honestly, all this build up really isn’t worth the reveal. You’ve probably already guessed what it is and I’m just ruining the whole situation by continuing to talk about it like this. I’ll stop now. Well, okay now. Now. 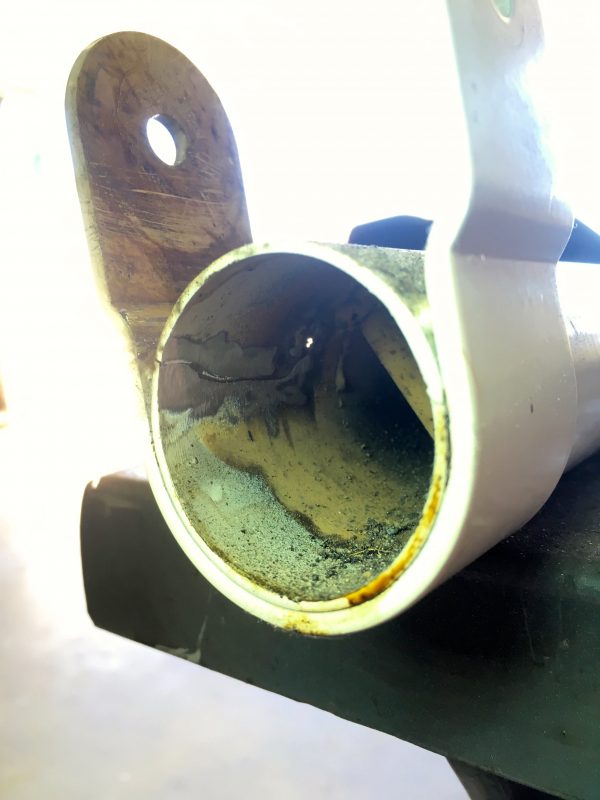 Yikes! Turns out that crack is longer than I thought, in fact extending the length of that bracket all the way to the end of the pipe. Well, since I can’t reach the area around the weld on that bracket, I need to try and repair from inside. This also afforded me a nice view of a pinhole that I missed. I made sure to fill that as well.

There’s very little room to work here, but with some finagling and violating some best practices of MIG welding, I was able to roughly approximate a “weld” in there. 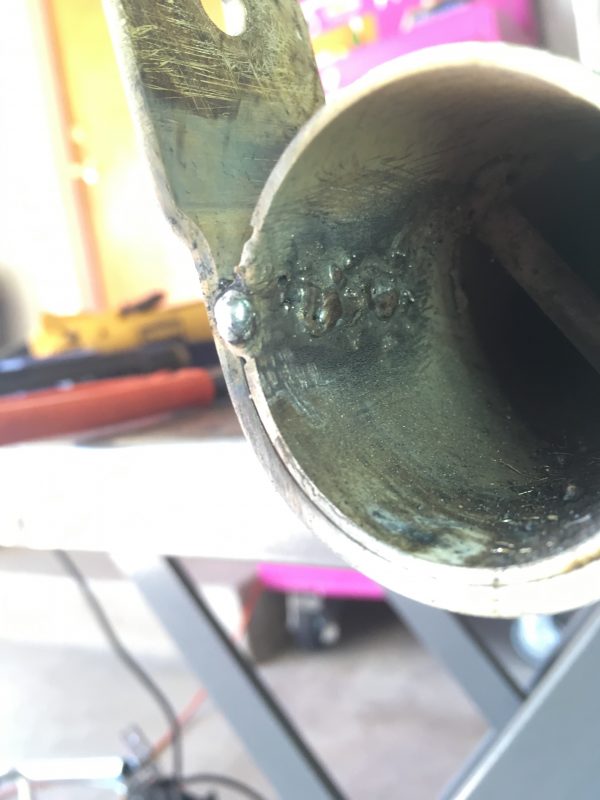 Again, it’s ugly in there, but I do believe it will hold. There wasn’t really a way to get the head of the torch in there, so I had to make do. This will just be between you and me, internet. Don’t tell anyone, m’kay?

With that crime against welding all finished, it was time to make the repair somewhat presentable. 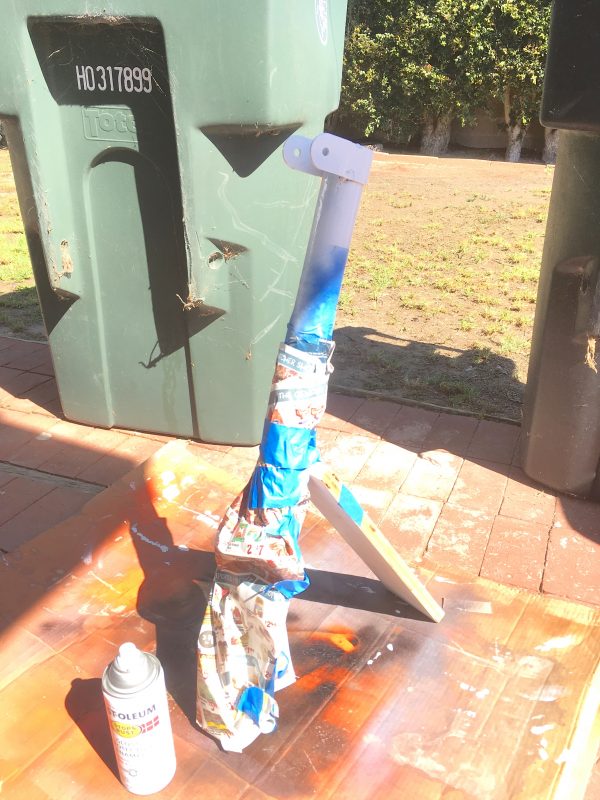 A little masking, a few zaps from the rattle can, and this repair is ready for showtime. 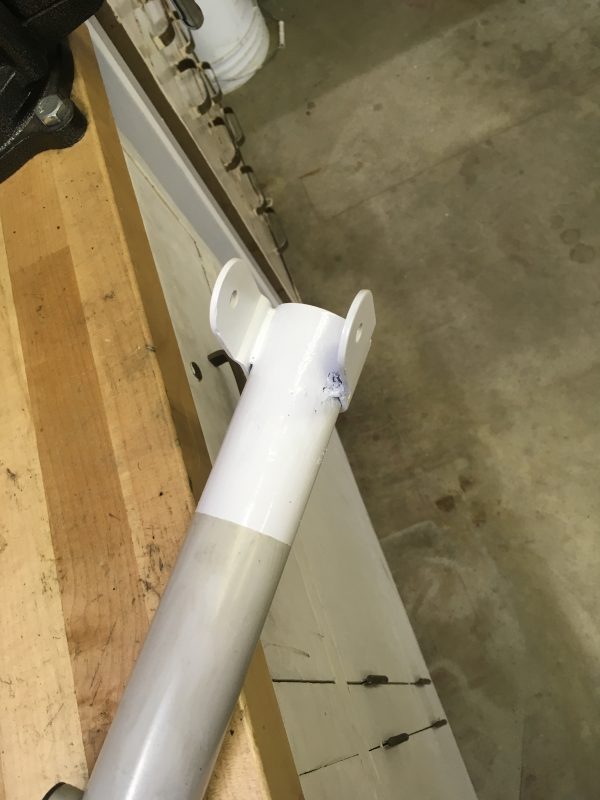 As you can see, I got really lucky here and managed to match the factory paint color exactly. Nobody will ever know I repaired this because the paint matches so perfectly. Can you tell which part is fresh paint? No, I didn’t think so. It’s a flawless match.

There you go- a grinder and paint make me the welder I ain’t. Okay, reassembly time! 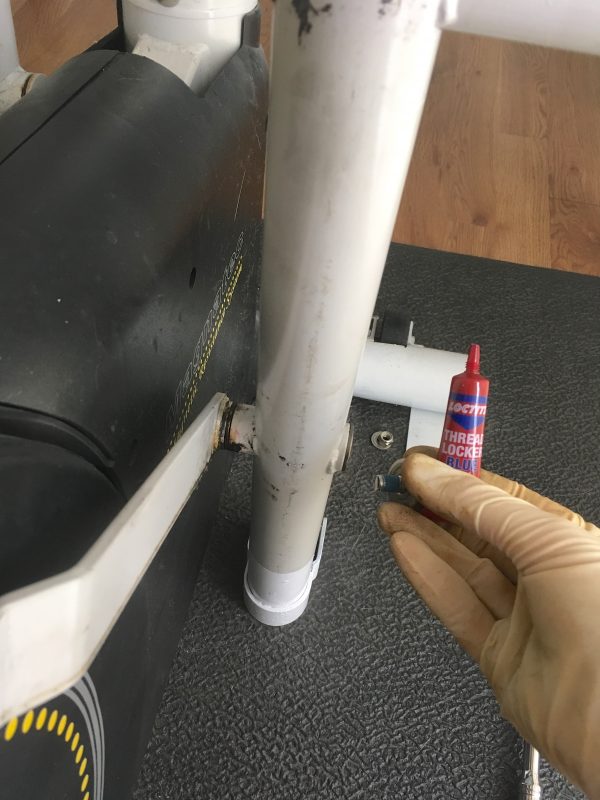 I cleaned up all the hardware and reassembled with fresh thread locker. 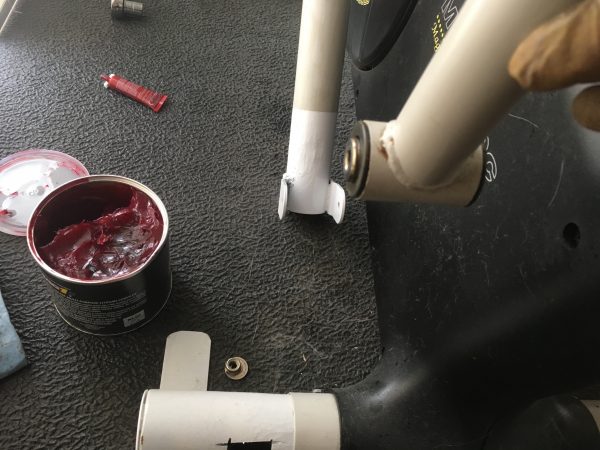 I also applied wheel bearing grease to all the bearing surfaces. I’ve been using bicycle greases, lithiums, and other things over the years, but none has held up very well to the abuse this machine dishes out. So it’s time to kick things up a notch and go Full Automotive up in here. This is sure to be effective, though it’s worth noting that nothing in this world smells as bad as high temperature wheel bearing grease. That’s just objective fact. The cat hair is optional for this repair.

While I’m in here and the tools are all out, I took the opportunity to freshen up the roller bearings as well. 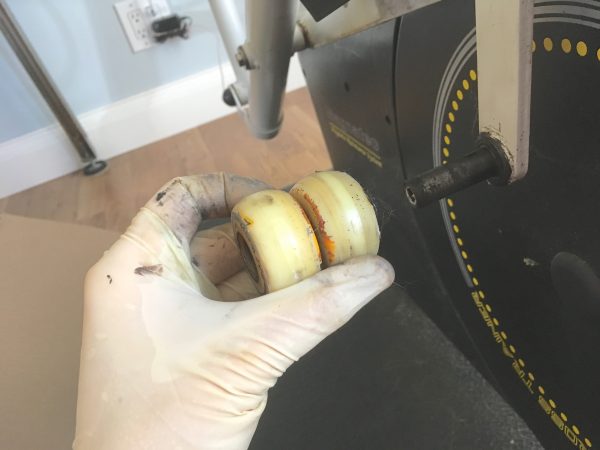 My Aggressive rollerblade wheel hack is holding up very well. The wheels show some signs of wear, but at this rate they probably have another 10 years left in them. You can see on the shaft that the bicycle grease I’ve been using is not standing up, however. These spindles were cleaned off and wheel bearing grease was applied.

A bit more reassembly, and this job is done! 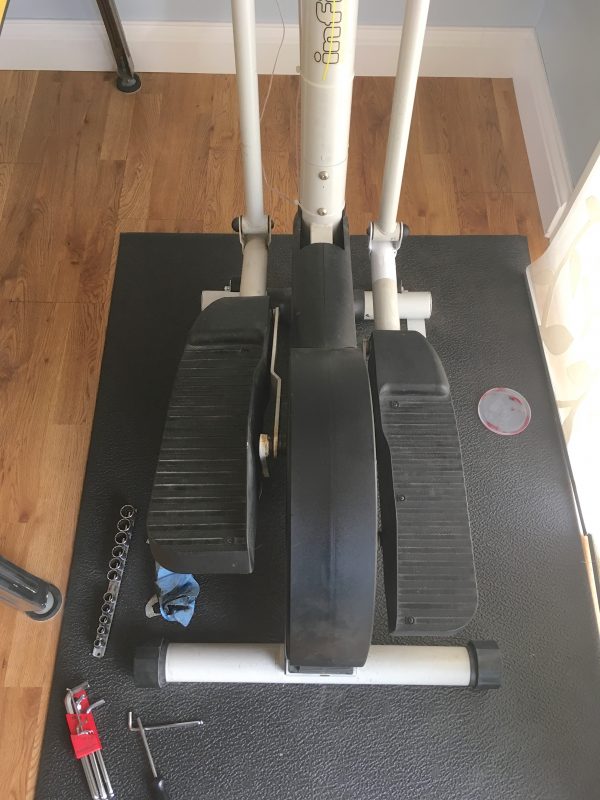 We’ve managed to squeeze a little more life out of this machine yet again! These failures are getting decidedly structural, though, so the writing may be on the wall. I’m actually quite stunned that the structure is failing before the magnetic resistance system, which is presumably full of moving parts and such. I guess the tubing they used for the frame is just a little bit too light for the application. Although to be fair they probably weren’t engineering for a 15+ year lifespan. We may not get another 15 years out of this beast, but it ain’t dead yet!