Etching PCBs is a topic I’ve covered quite a bit already, here and especially here. You might think I’ve beaten this copper and fiberglass horse to death. Well, I don’t want to be a one-trick pony, so there’s one more thing to try. Lucky for you, I’ve run out of horse-themed metaphors so I’ll just get to it.

I’ve been wanting to try two-layer PCB-making for a while now, because the boards I’m making for Veronica are reaching complexity levels where the top-side jumper count gets a little nuts. I also have lofty dreams of running boards above 10Mhz, and those jumpers will quickly become a liability. Furthermore, building jumpers is quite a bit of work, so if I can eliminate that, it would be a real win.

I had a fairly simple board to make for another project, so I thought it would be a good time to give this a shot. Here’s the board, which I routed by hand: 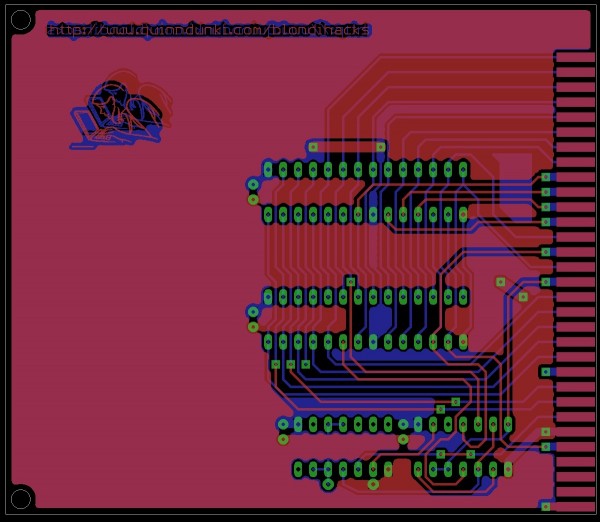 Hardcore tip- the top and bottom Eagle layers are almost the same colors as used in anaglyph 3D. So put on some 3D glasses, and you can hide one layer or the other just by closing an eye. Booyah.

So far, the experience has been awesome. Routing boards with two layers is fantastic. It really opens up the choices- especially when you consider every through-hole component is also a via. I really enjoyed routing this board!

Now on to the etching. This was a lot less fun than a single-sided, though with practice I would get better at it. My usual process is to print the traces onto transparency, then expose it on a presensitized PCB using a desk lamp. In this case, I need double-sided stock, such as this one. The double-sided presensitized boards are notably more expensive, but it still beats fab houses, or messing around with clothes irons.

For the double-sided board, I needed two transparencies, one for each side (printed from the Top and Bottom layers in Eagle). The obvious challenge with a double-sided board is getting the alignment right. My approach was as follows: 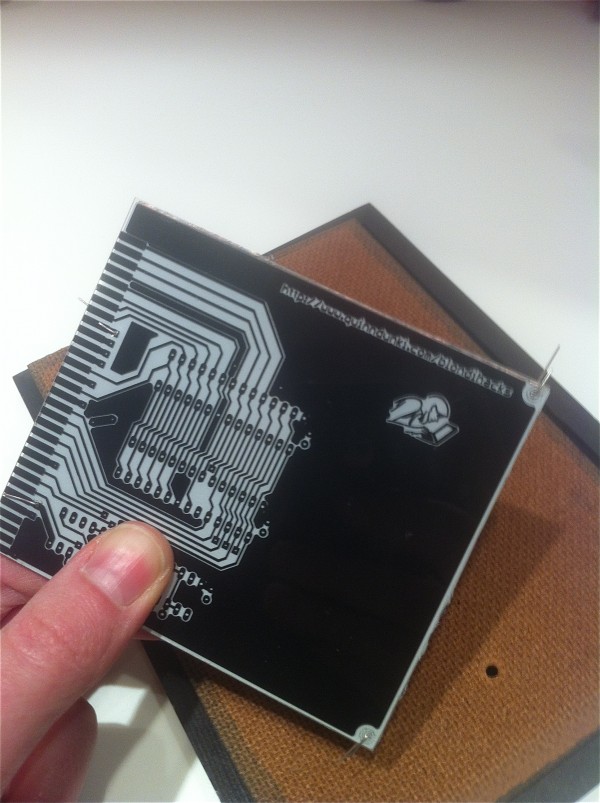 Here’s my sandwich of transparencies and PCB. There’s actually five layers here, because I double-up both transparencies to compensate for printing flaws. Underneath you can see the picture frame I’m about to clamp it in. The back of the frame is opaque, so it protects the off-side while the top is exposing. Note that the white protective film is still on the PCB here, so I can take the photo. You can see the little pieces of wire threaded through the holes in the corners and folded over to keep the alignment. 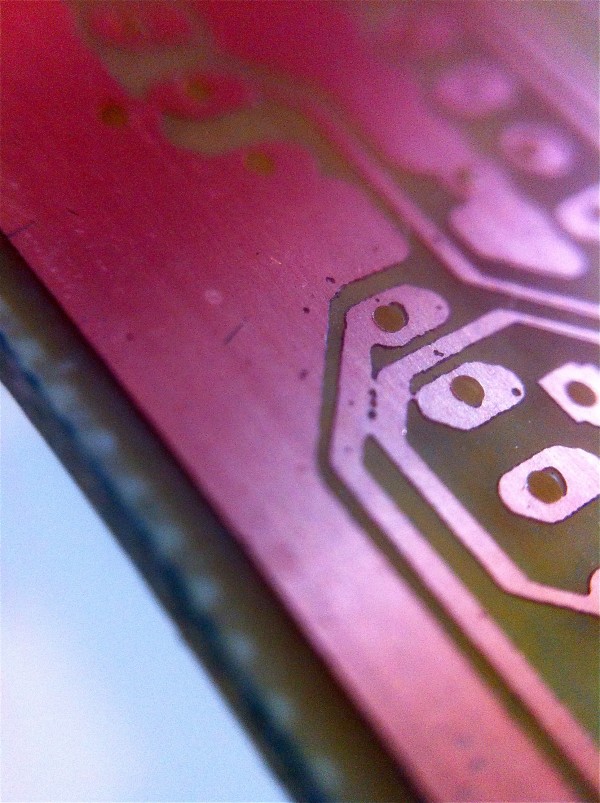 Alignment between layers was excellent, but you can see here how the two copies of the transparency on one side shifted a bit, which caused funny-shaped pads and some trace collisions. These were easily cleaned up with a knife, but if I’d only used one transparency on each side, I think it would have been flawless.

The next big question with a two-layer board is how to make the vias. I did the obvious thing, which is to stick a piece of bare wire in each one and solder both ends. 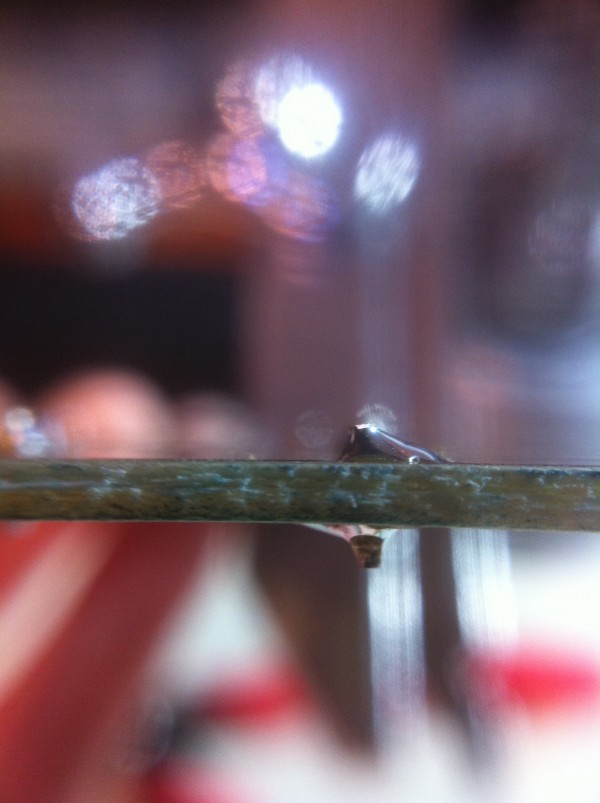 Here’s an edge-on shot of a via. This worked well, although it is a bit fussy to make them- almost as much work as making jumpers, honestly. Still, if you treat IC pins and other through-hole components as vias, you can get away with very few of these. 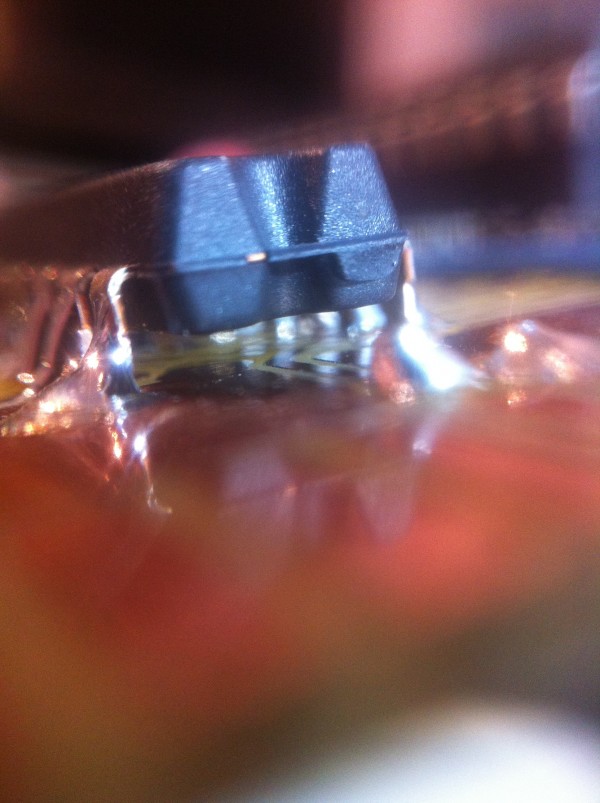 Luckily, I was able to make it work by floating the chip over the via with a generous application of solder. Just don’t do this.

There’s one more catch with this technique. Assuming you use component leads as vias (which you will really want to), it means you have to solder the top and bottom of every component lead. This is not a big deal, unless (as I found out the hard way), you need to remove something. Removing a large DIP IC that has been soldered on both sides without destroying it is nearly impossible as far as I can tell. No amount of desoldering bulb or wick would release it, sadly. I was replacing the chip because I strongly suspected it was bad anyway (it was failing some basic tests), so I bit the bullet and cut it off. 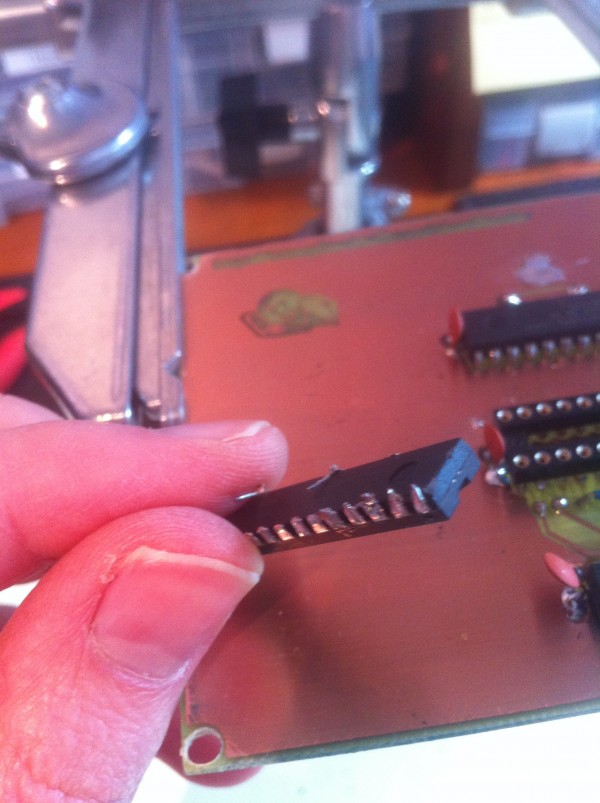 Grumble, grumble. Ironically, it may have been excessive heat (from soldering every pin twice) that killed it in the first place. No way to know for sure, I guess.

So naturally, you want to use IC sockets to prevent this problem. The reason I didn’t was that I couldn’t solder the IC sockets on the top. The ones I have sit flush on the board, so you can’t get in there with the iron. Well, a commenter here (thanks Ken!) pointed me toward Augat sockets, which leave some pin exposed at the board surface. They’re also sometimes called “high-reliability” sockets, I believe. Next time I will use these for every chip. 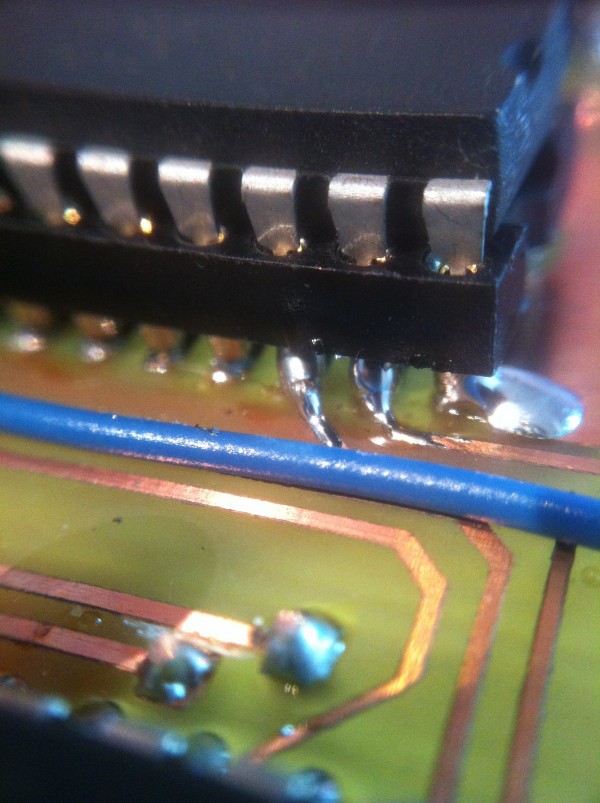 Here you can see that, if you’re careful, you can solder the tops of this style of IC socket.

One other minor issue I had- fussing around with the transparencies and bits of wire while building up the “transparency sandwich” caused some damage to the photosensitive surface. This resulted in some pitting on the final etch. 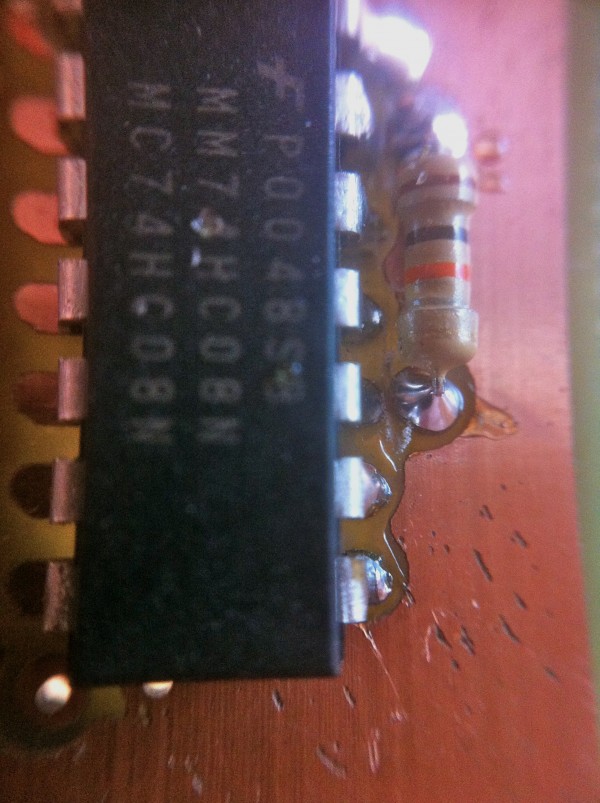 Here you can see some of the scratches I inflicted on the photographic surface while getting the masks aligned. None of this landed in a critical area, but it could have compromised a trace, so I need to be more careful next time. 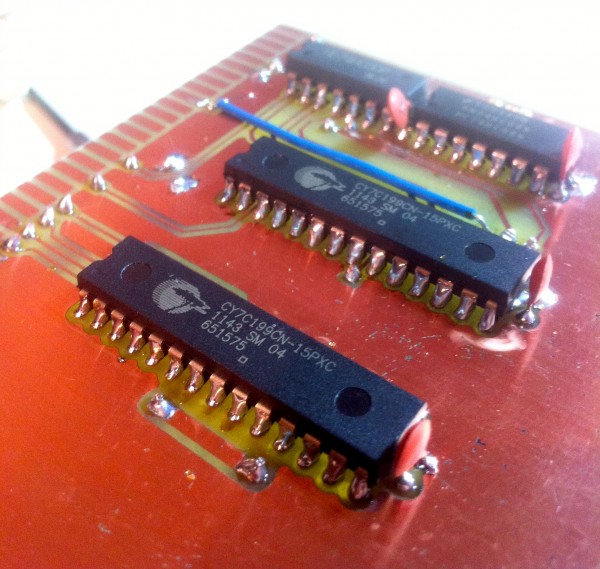 Here’s the final result (prior to my realizing a chip needed replacing). Overall, I’m quite happy with this, and would do it again in cases where the board complexity is high enough to warrant it.

I learned a lot in this process, and I’m glad I tried it. I will say that I wouldn’t do it for every board. The double-sided boards are more expensive, and it was a lot more futzing and fooling to get the exposure masks set up. The alignment hole drilling and whatnot is easy, but time consuming. Building the vias is also a bit fussy. Unless the board would require a lot of jumpers, I don’t think this technique is worth the extra time and money. If I ever make another one as complex as my VGA board, though, I’ll definitely be doing this. I will say that seeing a two-layer board in operation is very cool- I love the idea of all the signals flying past each other above and below!