Data on the go to go with my screen on the go.

With the basic Teddy Top now up and running with a nice working LCD, it was time for some storage. Floppy disks are swell for the nostalgia (and cool drive noises), but you just can’t beat modern flash memory storage. A 2GB SD Card costs a couple of bucks, and can store every piece of Apple II software ever made in the entire 16 year lifetime of the model line. Hard to beat that, cool drive noises or not.

Conveniently for me, the Apple II community is filled with very clever people from all around the world. There is a terrific range of solid state storage options. All of these devices work roughly the same way, with differing levels of compatibility with DOS 3.3 and ProDOS (the two major OSes used by 8-bit Apple II machines). You create disk image files using an emulator, or by downloading them from the internet. You copy these images to a flash memory card, and the device “presents” these images to the Apple II as though they were floppy disks inside disk drives attached to the machine. The Apple II has no idea that it isn’t talking to a floppy disk drive. Some devices also support virtual “hard drives”, in the form of a 32MB ProDOS partition. A 32MB hard drive on an Apple II would have been incredibly deluxe at the time, but with the power of Moore’s Law, we can all pretend to be big shots today.

The major players are:

Sidebar: There are other devices out there as well, but they have varying levels of availability and renown. I’m choosing to focus on the ones most people are using.

Each has pros and cons, and they all fill a niche. The CFFA is the “power user” choice, but requires an expansion slot, and availability is limited. It’s also the most expensive option. The SD Floppy II is inexpensive, extremely compact, physically attractive, and readily available. It does not require an expansion slot, but only supports DOS 3.3. The UNISDISK supports DOS 3.3 and ProDOS, and works externally or internally in your Apple II. It also emulates SmartPort- the only device to do so, as far as I know. That makes it a particularly good fit for the Apple IIc and IIc Plus machines. Normally, Nishida Radio is very responsive with orders for his wondrous peripherals, but as of this writing he is on hiatus for health reasons. We wish him all the best.

Luckily, I managed to get a UNISDISK prior to his hiatus, because I think it’s the right choice for Teddy Top. It was a tough call between the UNISDISK and the SDFloppyII, but I decided I wanted the SmartPort support. I’m a big fan of ProDOS in general, so I wanted the option to use 32MB partitions. 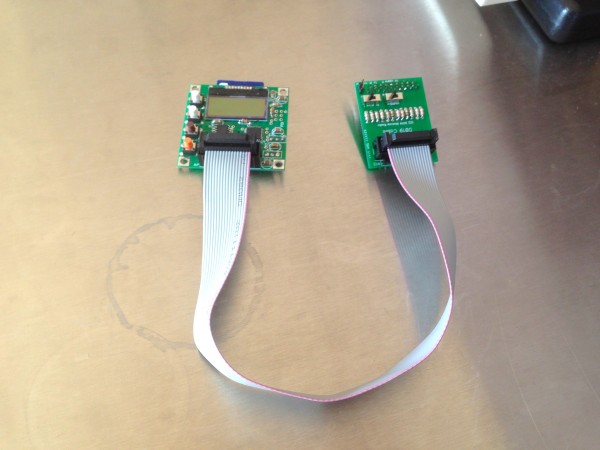 Very nice little device, all the way from beautiful Japan! It plugs directly into a regular Apple II internally, or to a IIc externally using the dongle shown. You could also mount it internally in a IIc if you were so inclined. The connector is compatible with the internal drive’s connector in the IIc.

I didn’t really plan for how to integrate the UNISDISK into Teddy Top, so it’s going to get grafted in after the fact. The first challenge is cabling. When used with a IIc, the UNISDISK has a “dongle” of sorts that connects to the SmartPort connector. This dongle provides the external DB-19 connector, adjusts logic levels, and provides switches for controlling whether it is treated as an internal or external drive. This is useful for the original IIc, which normally doesn’t have the ability to boot from an external drive. The IIc Plus already has this ability, so these switches aren’t needed. The dongle has one problem for me, however- it interferes with the carry handle on the IIc. 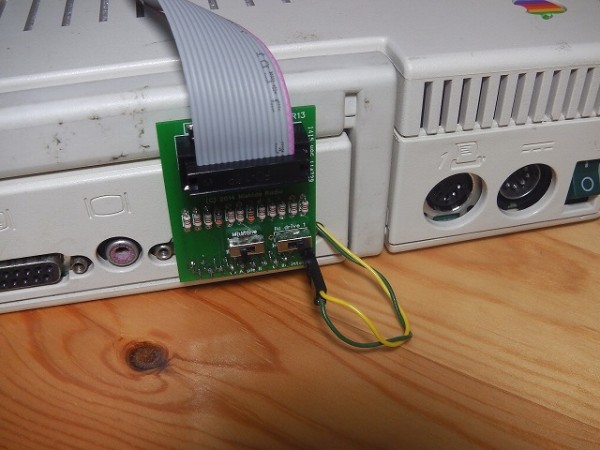 One of my primary design goals for Teddy Top is not to interfere with the carry handle in any way. This is a major feature of the IIc that Apple themselves seemed to forget when they designed their own LCD panel back in the day.

Apple’s LCD for the IIc had this rather large “block” connector that rendered the carry handle useless. Photo copyright Shrine of Apple.

There is at least some technical justification for this. According the to the documentation for the IIc, the 14MHz clock signal available on the display expansion port must be buffered inside an enclosure within 4 inches of the port. That makes some kind of dongle necessary if you’re using that signal (which their LCD probably does). Still, a dongle the size of two decks of cards seems excessive, even in 1986. I suspect this could have been engineered a little better.

In my case, while I can’t eliminate the UNISDISK’s dongle (it’s still needed for logic level adjustment), I can adapt it by moving it upstream on the cable. All I need to do is remove the DB-19 connector, replace it with a cable, and use my own DB-19 connector on the end of that. Unfortunately, I ran into a snag here. There are often unexpected part-sourcing difficulties with these old computers. DB-style connectors are still in production in all manner of sizes and configurations, so no problem, right? Well, except the DB-19. For whatever reason, nobody uses this size any more, and they are very nearly unobtainium. In fact, Nishida Radio makes his own for this reason. It looks to me as though he is 3D printing them and pressing in the pins. Very clever!  You can still buy solder-cup-style DB-19s from a few sources, but these are intended for use in sturdy external cables, so they are very bulky. I wanted to use a low-profile IDC-style like I used on Teddy Top’s display connector. These are no longer available in DB-19 anywhere in the world, as far as I could determine. At one point I thought I had found a supplier in Canada that still had some on the shelf. Turned out it they were mislabeled. The IDC DB-19 connector is lost to the universe, it seems. My next project is a time machine so I can go back and buy some (after killing Hitler, of course).

In the end, I decided to reuse Nishida’s homemade connector. It’s lower profile than the solder-cup style DB-19s you can still buy. Using the Hakko 808, I very very carefully desoldered it from the dongle. The connector is sturdy enough for its intended use, but it’s not bulletproof, and it certainly isn’t intended to be removed and reused this way. 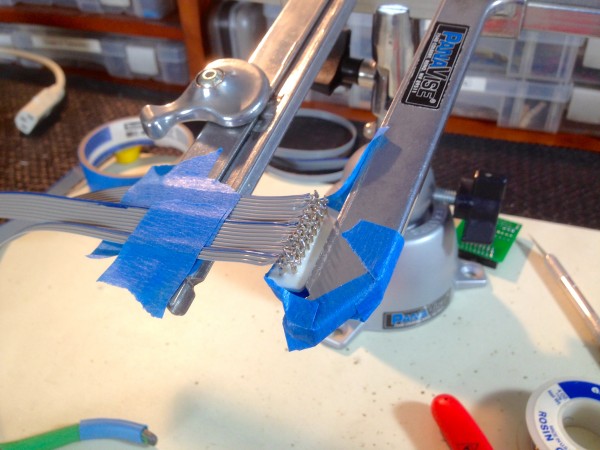 I very carefully desoldered the connector from the UNISDISK dongle, and soldered my own cable on to it. 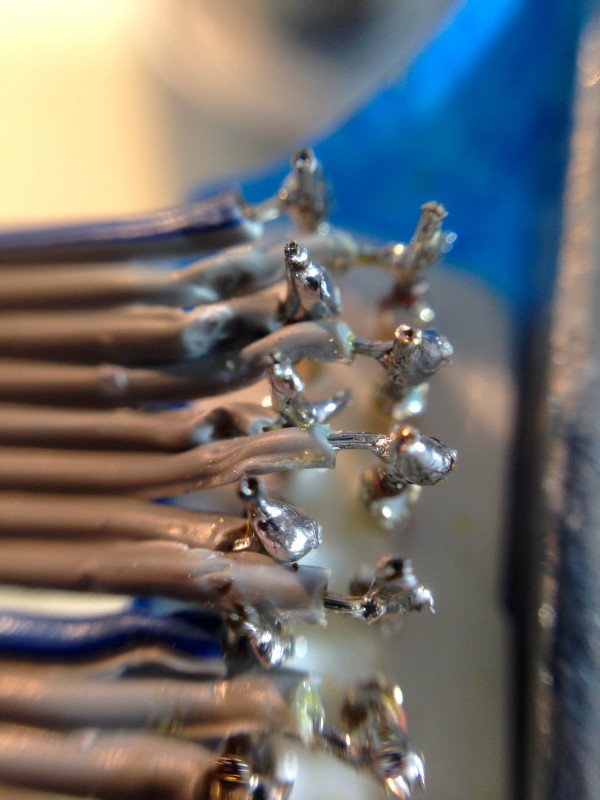 To keep things as compact as possible, I cut the alternating wires to different lengths. I wanted the assembly to be flat and tight. The whole thing gets covered in hot glue.

The next challenge was vertical height. I only have 18mm of height inside the deepest part of Teddy Top, and the UNISDISK is a little thicker than that. The first place I needed to optimize was the ribbon connectors between the main device and the dongle. I needed to remake the cable anyway, so this was easy. 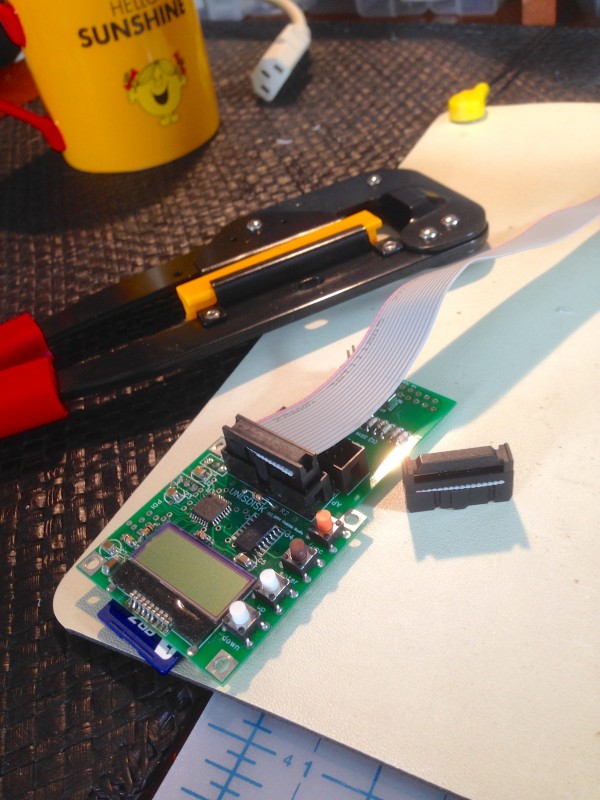 I shortened the cable to the dongle, and used lower-profile connectors. Also shown is my new IDC crimper. It’s a great tool, but in a pinch, a bench vice or C-clamp works. The clamping pressure must be even along the length of the connector, and orthogonal to the pins. I plan to make lots more of these connectors, so I sprung a few bucks for the tool. These connectors are awesome, and I wish I’d known how easy they are to use when building Veronica! I wasted a lot of time making my own inline header connectors out of solder and scrap wire. 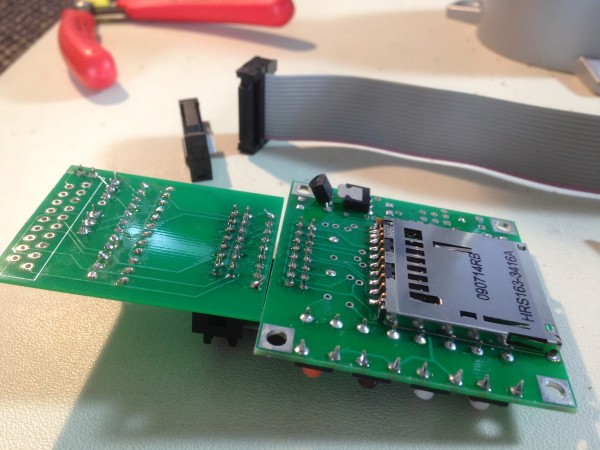 With the cable shortened, the old dongle is now a single unit with the device. Clearance is so tight here that I had to bend over that transistor on the back to get the device flat enough to fit inside Teddy Top. 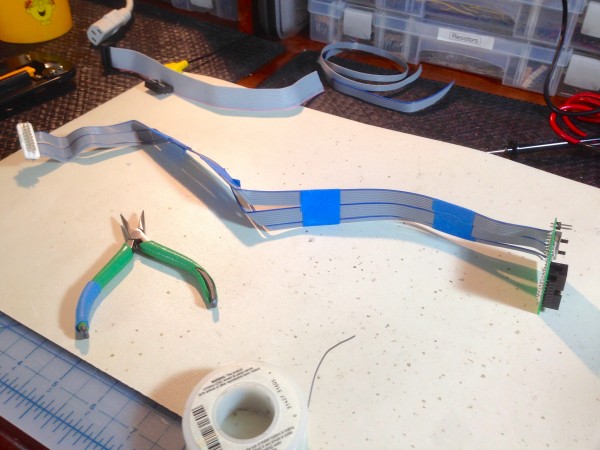 My new cable, soldered in to the dongle and ready to go. Needless to say, lots of lots of checking was done on this to make sure every pin ends up where it is supposed to on both ends of the cable. A mistake here could easily fry the disk controller inside the IIc Plus, so I only have one shot to get this right. 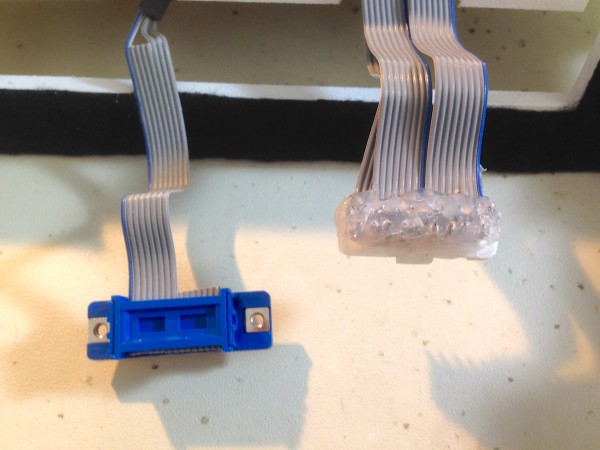 A little hot glue, and this is almost as nice as the IDC connector on the video port, right? Right? Bueller?

Now the moment of truth. Does this all work? Spoiler: yes it does. Here’s a demo of it booting up the machine. If you look closely, you can see the little UNISDISK display showing the virtual track numbers being accessed as the virtual floppy boots. Very cool. It’s a bit trippy watching the machine boot in silence. I almost wish the device made fake disk drive noises.

If you’re wondering why the Lode Runner dudes are running like they’re on cocaine, it’s not because they’re from the ’80s. I booted the game in 4MHz mode, which you would not normally do for gaming.

Now for final mounting. I needed something to contain all the cabling, and the junk pile coughed up this chunk of brass mesh. 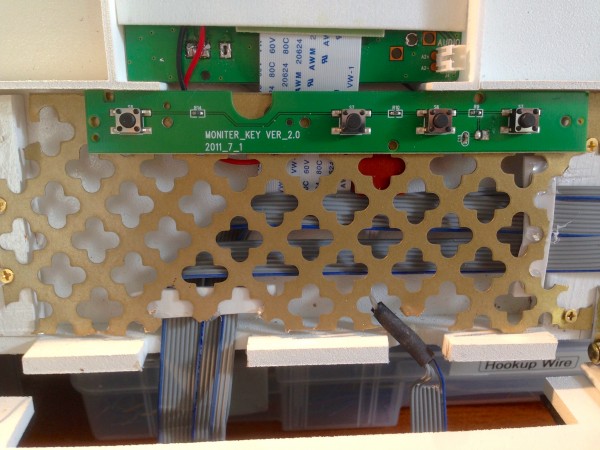 This was also a handy place to mount the controls for the LCD display.

The final mounting position is something of a comprise. I wanted it low down, because Teddy already has a fair amount of weight up at the top. If it gets too top-heavy, the hinges won’t hold position well any more. So, lower is better. However, the SD card reader on the UNISDISK is on the bottom, so it needs to be high enough for clearance to insert and remove the card. These competing forces landed it somewhere in the middle. 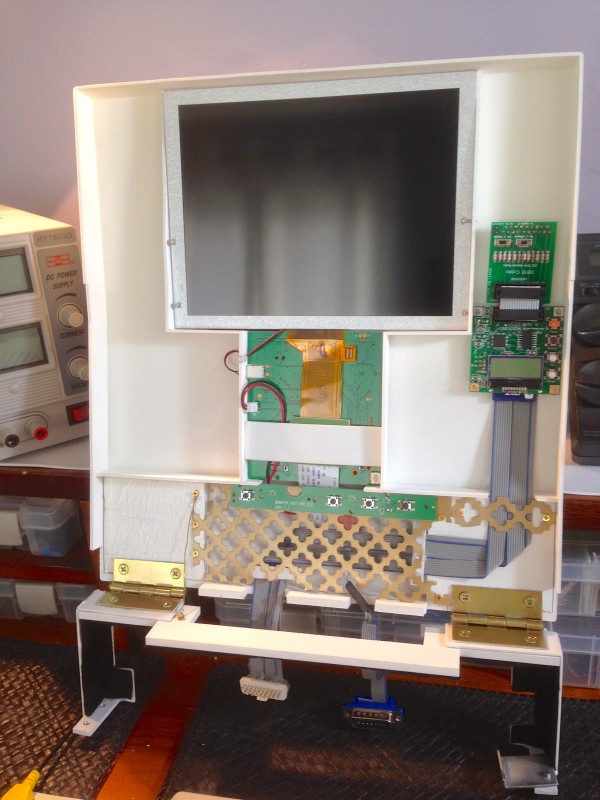 I haven’t decided yet if I’m going to further enclose things. A Blondihacks reader described it as “cyberpunk”, and I like that characterization. I suppose the brass could tip the scales towards steampunk, but I like cyberpunk much better. Enclosing things would be pretty complex, as there’s a lot of angles and different depths of cavity involved here. Clearance is also very tight. Once again, 3D printing could be a nice solution, but I’m not prepared to spend that much on it. We’ll see how this shakes out- no firm plan here yet. 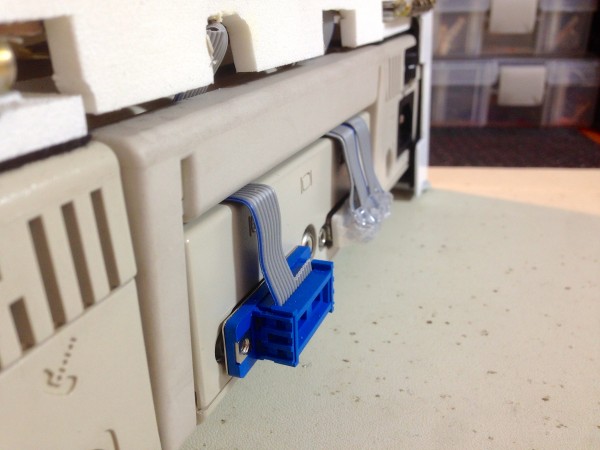 Once last look at the back, showing the two connectors and how they clear the carry handle nicely. I’m particularly fond of this aspect of the design.

We’re not done with Teddy Top yet. Stay tuned for more!