Rescuing yet another almost-great product.

One of the running themes here at Blondihacks is rescuing products from the landfill when they “barely fail”. That is to say, one single element of the product was under-engineered, greatly shortening the lifetime of the overall system. In this case, it’s a head-mounted magnifier. You know the one, because some factory in Asia is cranking these things out at a furious rate. They are sold in a hundred places under a dozen different brands, for a lot of different prices, but they’re all identical. 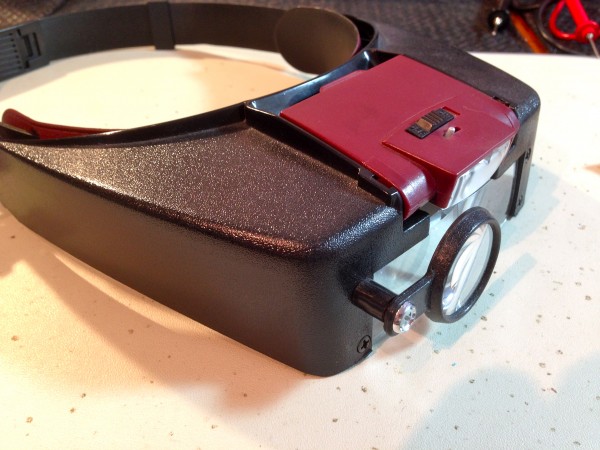 If you go shopping for a head-mounted magnifier, you are guaranteed to find this one. The only variable is how much you pay for it. No matter the store or the branding, it’s this exact one.

I bought mine on eBay, from a storefront that appears to be one of those direct portals for a Chinese factory that we all know and love. These seem to be commonly used to unload surplus, or to market the output of an off-the-books third shift. It was listed at Buy It Now for $11 (USD), but had a Make Offer button. So I offered $5. The vendor came back with $8, so I pulled the trigger. Eight Freaking Dollars. Shipped. From China.  At that price, if it only works twice, I probably got my money out of it. There are rather a surprising amount of features, as well. Two primary magnifying lenses, which can be combined in different ways for different magnifications, a bright LED light that tilts and swivels, a front mounted loupe that can be swiveled in or out, and an adjustable headband.

With a list of features like that at such an impossible-to-believe price point, you know corners are being cut. In my experience, the corners are usually cut on mechanical elements. Fasteners, switches, hinges, connectors, that sort of thing. Electronics and plastics are cheap in any product. It’s the mechanical elements that are expensive. Have you shopped for quality toggle switches lately? A good one (rated for many thousands of cycles) costs more than this entire headset.

So what failed here? Well, after a few months of regular use (mostly while building Veronica), the LED light started flickering. The batteries were fine, but the light wouldn’t stay on.  I gave up on it and continued to use the magnifier without the light. This works okay, but I really missed the light. Having white, focused light shining on exactly what you’re looking at is really nice. I wanted that back. Also keep in mind that any magnifying lens requires extra light. As any photographer can tell you, lenses eat light, and cheap plastic ones like this, even more so.

I could buy another one (for eight freaking dollars shipped), but that’s not the Blondihacks way. I had to crack it open and see what the problem was. 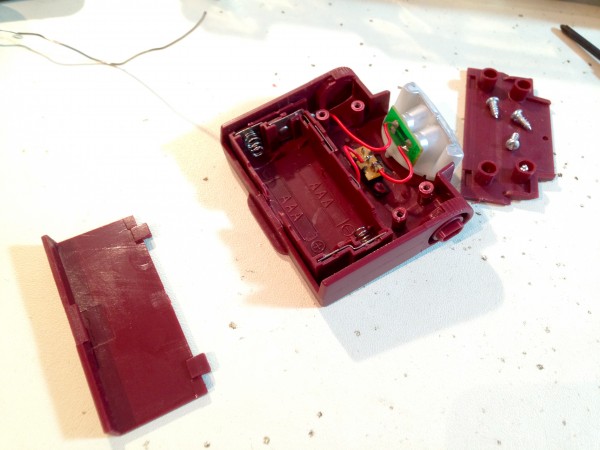 Inside, you can really see where the corners were cut to hit that price point. The switch is plug-melted in place and all the solder joints are cold. The latter were clearly done by hand, probably at a piece-work rate, so the worker was motivated to do it quickly. One of the contacts on the switch has been overheated from the soldering, as well. It’s badly burnt.

After testing the batteries to make sure, I checked the LEDs themselves by applying power from the bench supply. No flickering. That left only the switch. I checked it for continuity, and immediately got intermittent beeps. In a turn of events that surprises nobody, the world’s cheapest switch has failed. 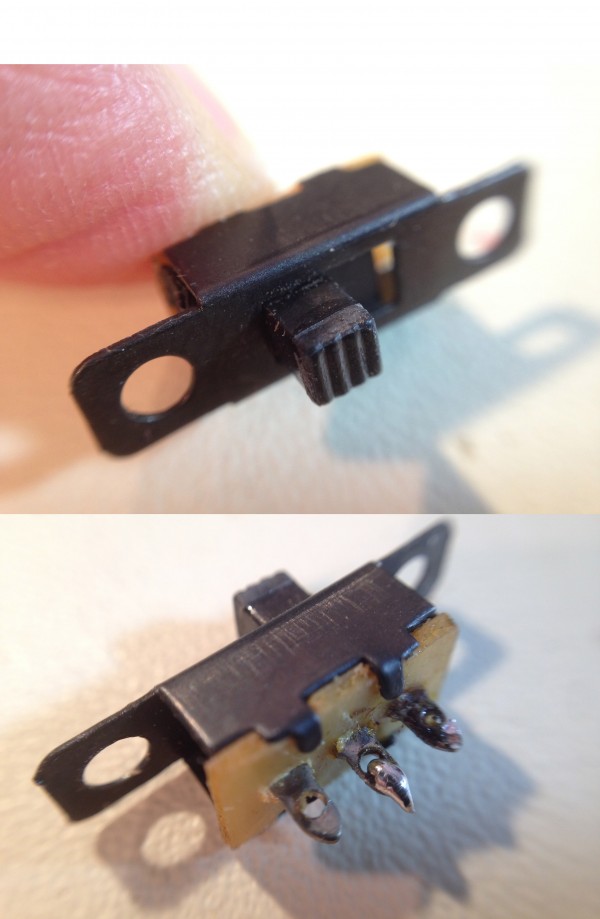 If you’d offered to bet me this would fail someday, I would not have taken that bet.

Seriously- this thing is made of hopes and dreams. It’s the flimsiest little switch I have ever seen. Even at this small size, you can tell how cheap it is. It’s probably rated for 20 cycles. It doesn’t even have any part numbers, specs, or markings of any kind on it.

Luckily, that’s an easy fix for us. To the junk pile! 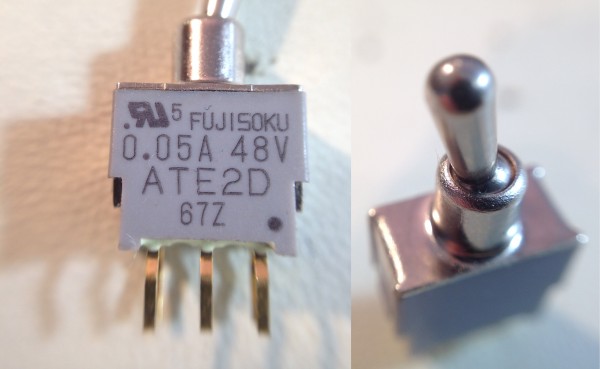 Not being able to leave well enough alone, I wanted to know what was in that slider switch and why it failed. Nothing for it but to crack it open. 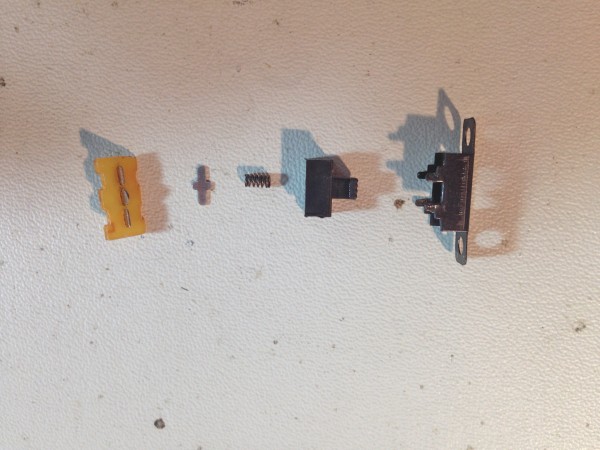 This does not inspire confidence.

The cross-shaped metal piece is perched on the pointed center blade, held in place by the plastic slider knob, and the spring. When the switch slides, the spring causes one side of the cross to rock over to that side, closing the contact. This all only works if everything stays tight and perfectly aligned. Alignment is only maintained by the metal pieces being pressed into a scrap of phenolic. Tension is only maintained by the folded metal tabs on the outer casing. The metal cross appears to be held in position over the contacts by rainbows and whale songs. There are about 14 points of imminent failure in this switch. Time to deep-six it. 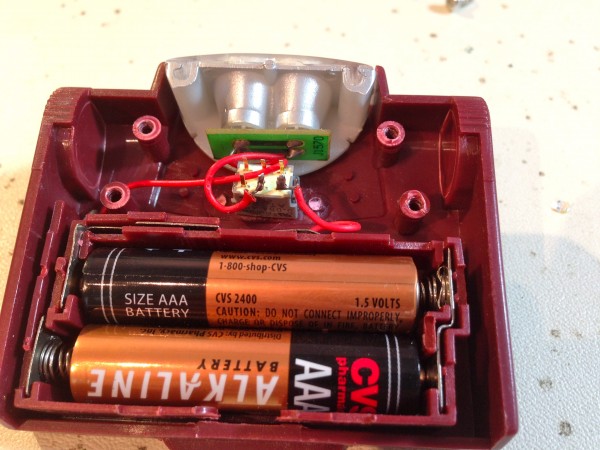 I found that nice little micro-toggle on the junk pile, and it fit the slot the old switch sat in. I cut the melt-plugs off the old switch, and stuck this one in its place.

A new switch, a little superglue to hold it, and we’re in business. For good measure, I re-did all the terrible solder joints that were in this thing. Every one of them looked like it could have been the next failure point (if not the current one!). 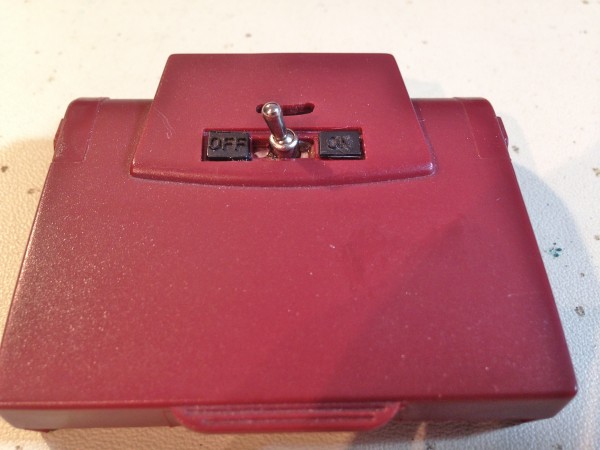 Just to take the hack to the next level, I cut the old slider switch apart and used it to make embossed on/off labels for the toggle. Deluxe, son! 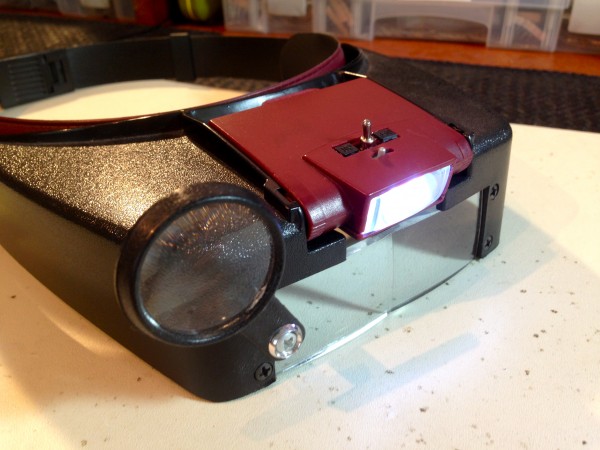 I’m not going to say, “let there be light”. However, you should know it’s taking all my willpower to resist saying that. But I won’t. I will conclude this article without saying that.

There’s an interesting math you can do in the modern globalized world. Sure, it’s easy to say we should always get the better quality product, and this “race to the bottom” in consumer products is bad for the planet. But sometimes a product this cheap is actually almost quite good. It was clearly very efficient in both labor and materials to make (otherwise it couldn’t be this cheap), and if we keep it out of the landfill, it’s actually a net win all around. I’ve gotten a couple of years out of this thing so far, and I should get many more out of it now, all for far less strain on the environment than a higher quality headset would incur. So, the moral is, environmental stewardship is really about efficiency, and what’s genuinely efficient isn’t always obvious when you consider the whole lifecycle of a product, from materials and manufacturing on up.

Okay, okay, I’ll get off my soapbox. I’ve got things to do with my “new” headset!