Adapting the old to the new

Sometimes the simplest hacks are the most useful.

My beloved ten-year-old Pioneer 502MX plasma television died recently. It was not repairable this time, so away it went. On the plus side, it was an opportunity to pick up a shiny new Samsung 55″ LED TV. It’s an amazing piece of kit, and cost less than one fifth of what my Pioneer did when new. Of course, I didn’t pay retail for the Pioneer (if I could afford that, I wouldn’t need to hack the wall mount to save a few bucks), but that’s another story.

Anyways, when it arrived, it was time to get it mounted on the wall. Many years ago, I had gone to great lengths to wall-mount my Pioneer, and it was no small amount of trouble. That panel was 6″ thick and weighed 132 lbs. The wall mount for it is a serious slab of steel, with 6″ lag bolts that go into the wall studs. It was a non-trivial project to mount it, and I really didn’t want to undo it all just because it wasn’t compatible with the new panel.

The official Samsung mount is $200(!!), and it’s amazing how… unsubstantial it is. It’s literally two bolts with a cable between them that they say you can hang from drywall anchors. Wha??! 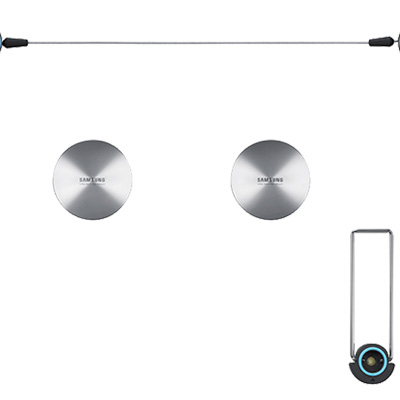 $200? Really, Samsung? The little widget on the right is a "kickstand" so you can tilt it to access the connections. Come on now- a pair of Benjamins for two fancy bolts and some string. Sheesh. Sure, knockoffs of this mount are available for much cheaper, but we can do it for zero dollars!

How can they get away with that flimsy contraption? Well, this new TV, despite being considerably larger than the old one, is only 1″ thick and weighs a scant 39lbs! It’s really quite amazing. It weighs less than the mount for the Pioneer did. The svelt mass is what will make this hack so easy.

The Pioneer mount was two pieces of boxed 3/8″ steel plate. The first piece mounts to the wall: 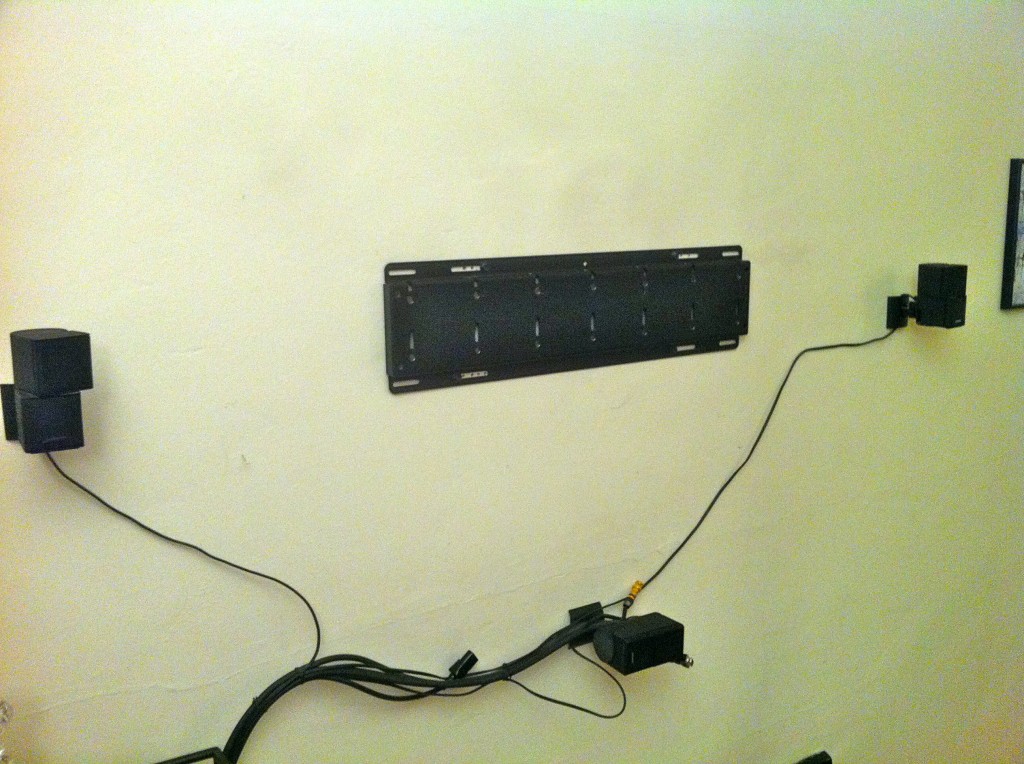 The row of slots are what the other piece hooks into. They provide some basic lateral adjustment of position. This piece is bolted to the wall studs with 6" lag bolts, and is rated for 250lbs.

The second piece is a plate that mounts to the back of the TV, and it has hooks on it that engage with the wall bracket shown above.

The Samsung has a standard VESA 400 bolt pattern on the back for mounting. The old Pioneer, unfortunately, had an arbitrary bolt pattern of its own. Luckily though, that pattern was wider than VESA 400. That means I could just drill some holes in the backing plate, thread in some M8 bolts, and presto! Instant Samsung-to-Pioneer conversion plate. 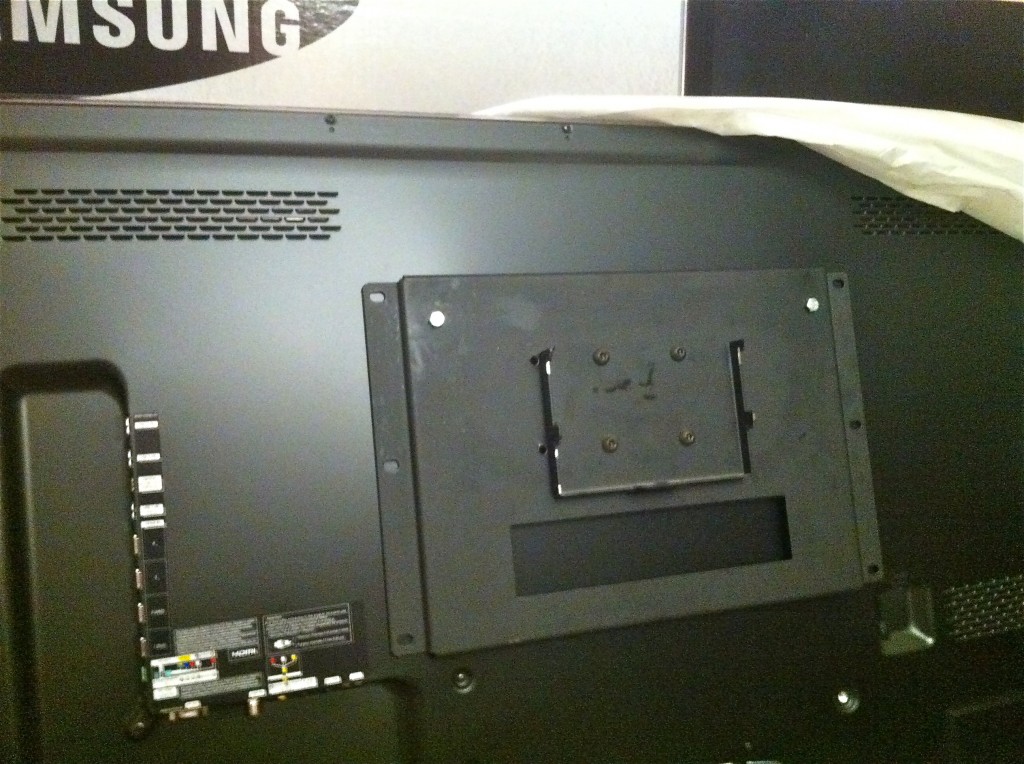 Note that the plate is too short to reach the lower VESA 400 holes. However, we know this is okay, since the factory Samsung mount only used the top two bolts. All that was needed was some big washers behind the plate, because it's boxed and we want the stress to be distributed around the area of the bolt holes. 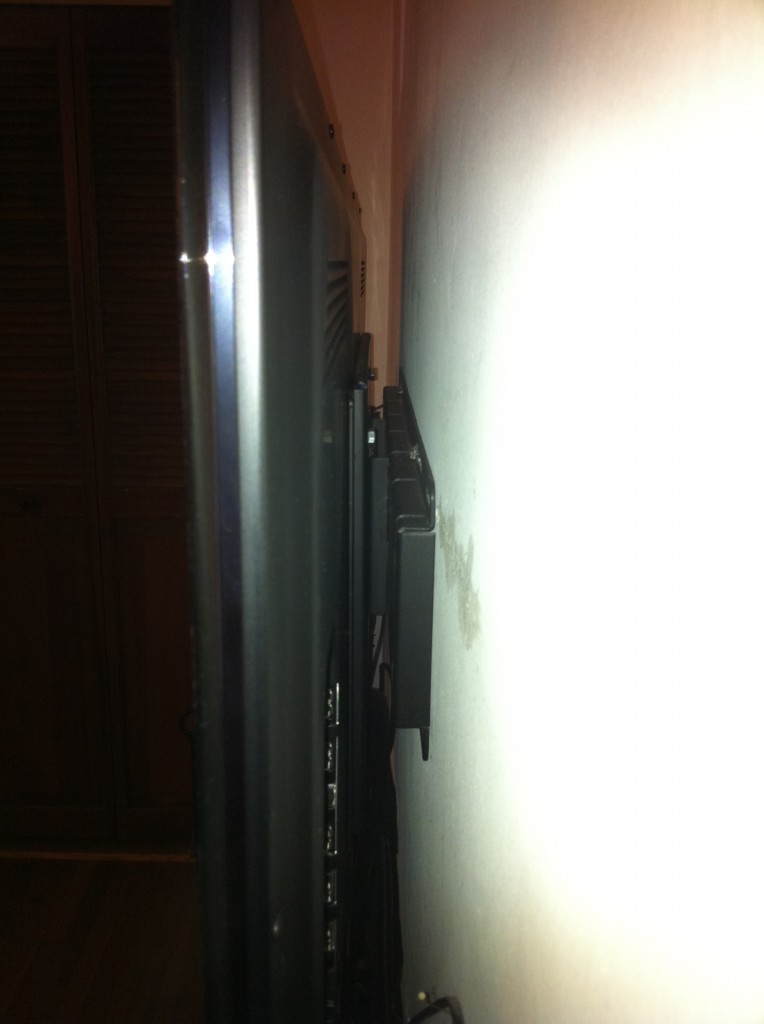 It was then a simple matter to hang the TV on the existing wall mount. The height is perfect, and we know it's level since that was all set up carefully for the old panel. It's safe to say that it is five kerfillion times (precisely) stronger than the factory mount. Not a bad idea here in earthquake country. No matter what Samsung says, I'm not hanging an expensive piece of electronics from freaking drywall anchors. 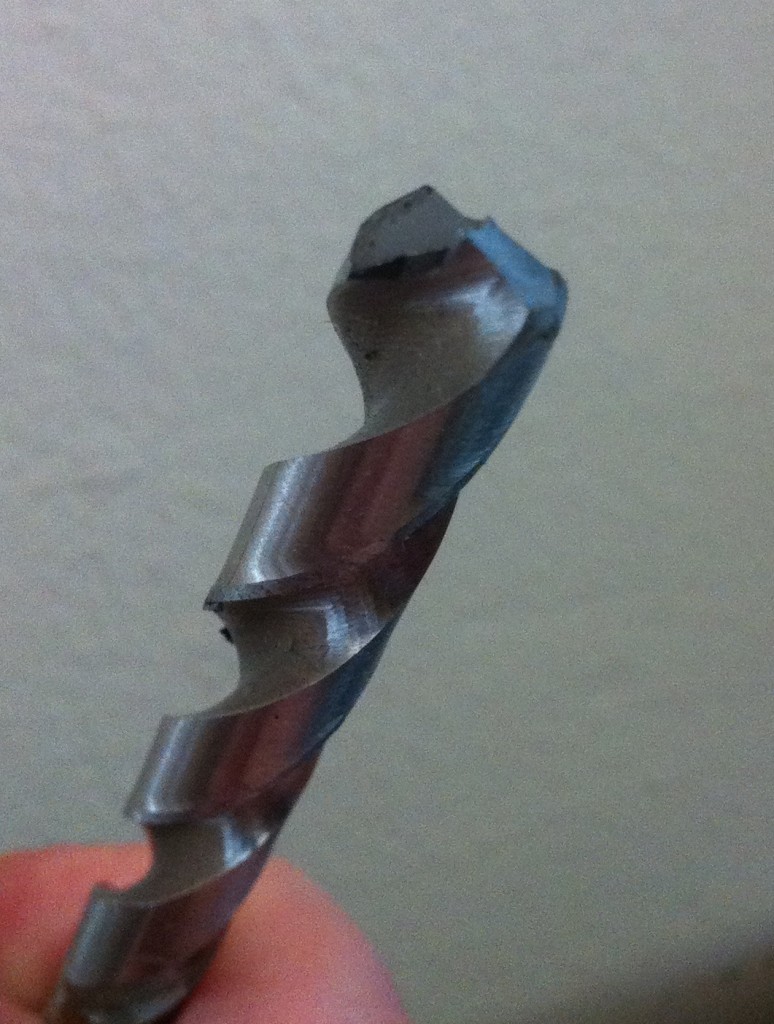 One 3/8" drill bit was injured during the making of this hack. In all seriousness, I've had it with disposable hardware-store drill bits. This (brand-new) one shattered on the second hole, and I was using oil and being careful not to overheat it. If anyone could recommend some genuinely good drill bits, please enlighten me in the comments below.

There you go. A simple hack that solved a problem and saved a bunch of money. What more could you ask for?  Well, an electric unicorn that farts rainbows would be nice, but we can’t always get what we want.