Conversion of an exercise machine to mains power

I have an elliptical cardiovascular training machine that I’m quite fond of. It has a nice computer with different training regimens, and a magnetic resistance system that is very smooth and quiet. The problem with it is that the whole thing runs on C batteries. Four expensive C batteries, that it chews through in about three months of regular use.

I finally grew weary of buying batteries for the thing, and it dawned on me that there’s a power outlet an arm’s length away from it. Why not convert it to run off that? It’s more efficient, more environmentally friendly, and much cheaper to boot.

In addition to converting it to mains, I wanted to make this hack in a completely reversible and non-destructive fashion. I like to do that when possible.

Here’s what I came up with. 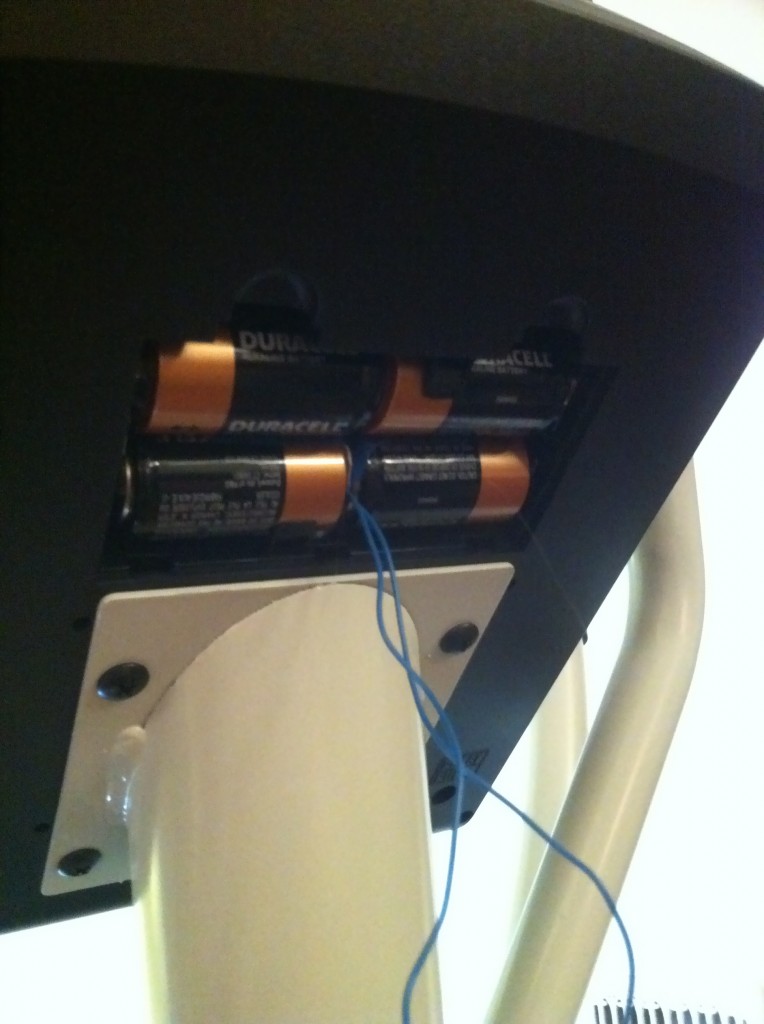 First of all, I needed to know how much power this thing needs. Obviously it's six volts, but how much current? I patched an ammeter into the circuit by insulating two of the battery poles from each other and hooking my ammeter in series between them. 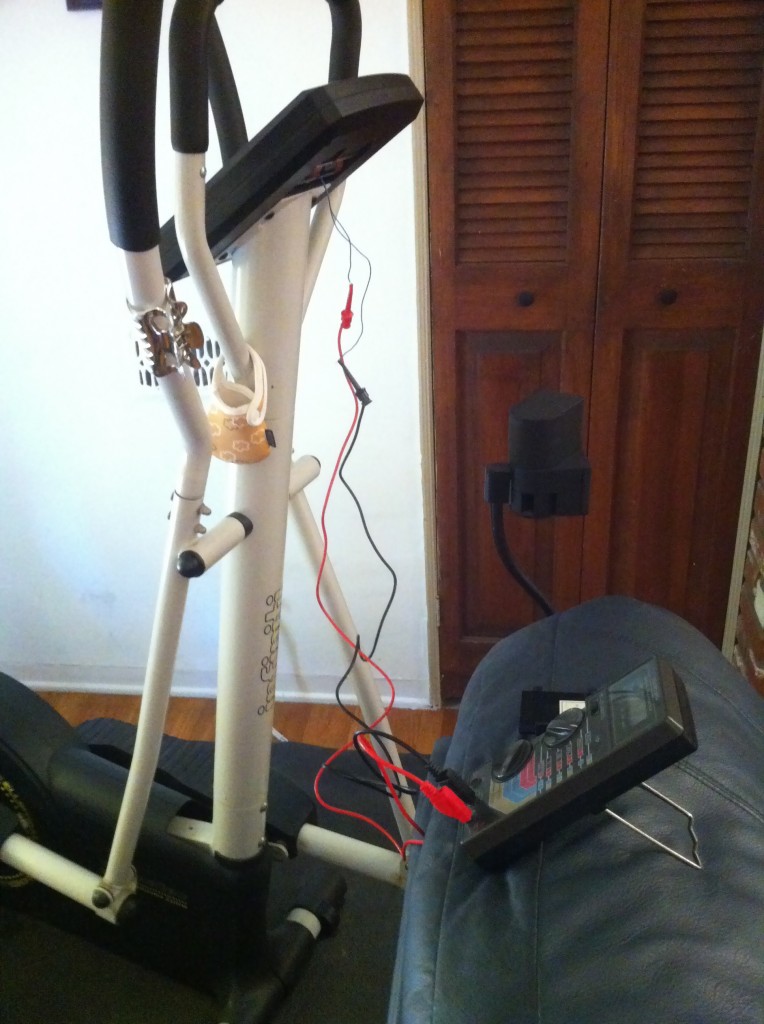 Next, I ran the machine through its paces (worked up a good sweat!), while keeping an eye on the ammeter. This way I was able to determine the peak current draw is just south of 200mA. This is when the stepper motor is adjusting the magnetic resistance mechanism. I'll design the power supply for 1000mA just to be sure.

I pulled a 12V/1A wall wart off the junk pile (I swear these things are having babies in the closet). That’ll be lots of juice, so now I just need to regulate it. Here’s the circuit I threw together to do that: 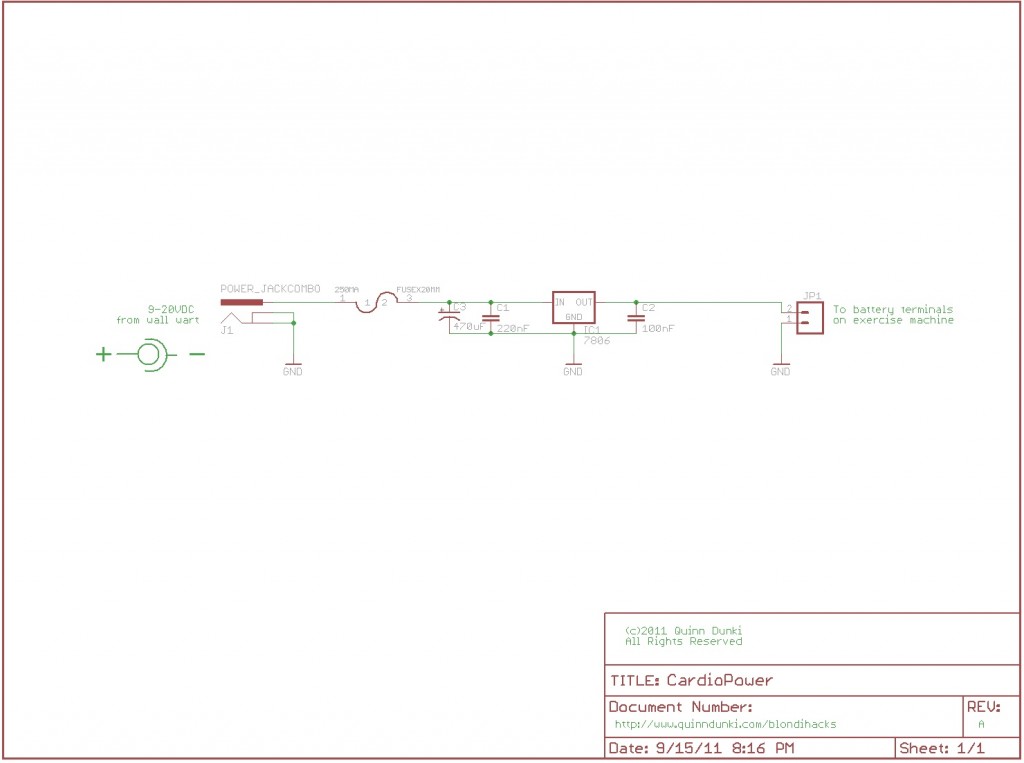 This is pretty much my go-to circuit for wall wart regulation these days. In this case I'm using the lesser known 7806 regulator, and some basic filter caps for support. I'll use plain old protoboard this time around. An etched PCB isn't worth the effort here. 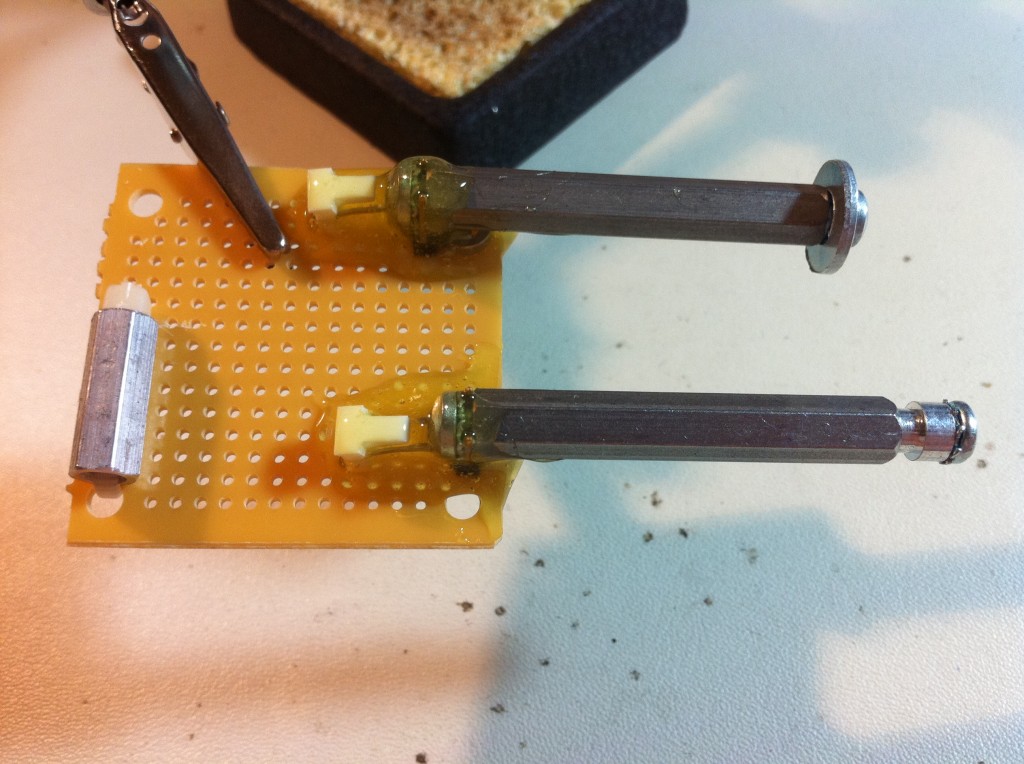 The next question was how to interface non-destructively with the power circuit in the machine. My solution was to build a structure that sits in the battery compartment and contacts the normal battery terminals. The old C batteries are bulky, so there's plenty of room in there. On the right side, you can see two prongs made from some long standoffs. They have screws in the end for length adjustment, and the negative one has a washer to capture the big spring in the battery compartment. The left end of the battery compartment is just a shorting plate to put the four cells in series, so we can ignore that. On the left edge of the board, I've zip-tied a standoff to act as a backstop for the other battery terminal spring. It will serve to compress it and keep this whole contraption in place by tension. The prongs are mounted with five-minute epoxy, my favorite lazy building material. The white plastic bits are scrap headers epoxied in to triangulate the backs of the prongs and make them stronger. There will be a respectable amount of spring pressure on them. 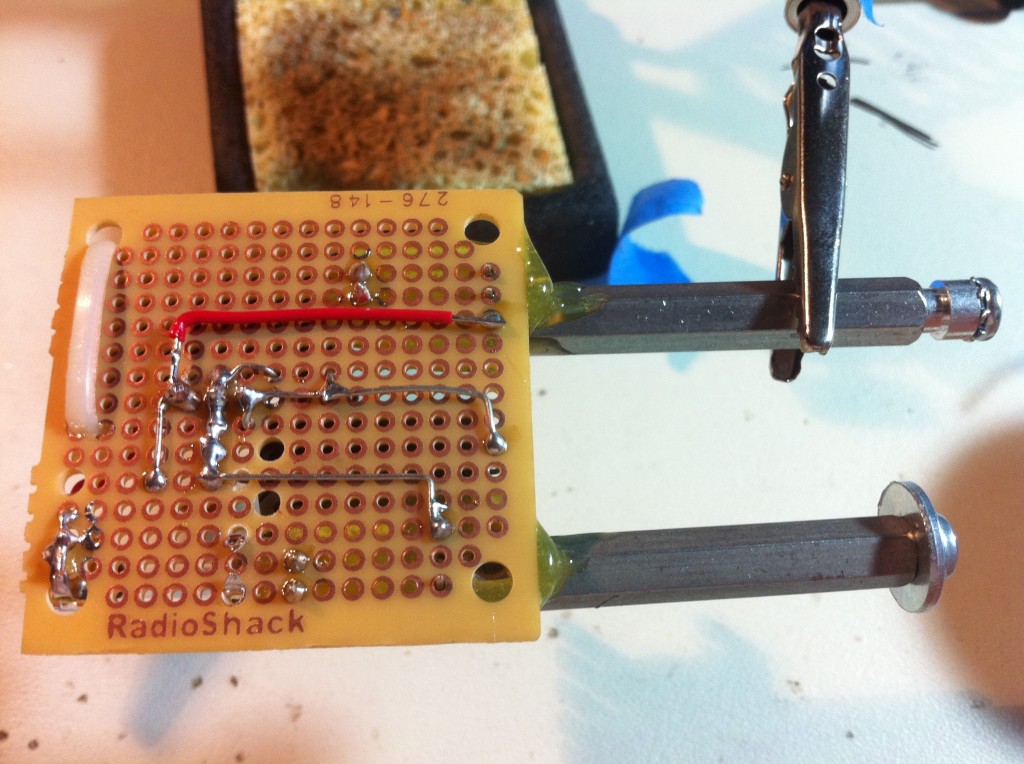 The prongs are sandwiching some vertical header pins which are difficult to see in the previous photo. They stick through the board here to provide the electrical connection. 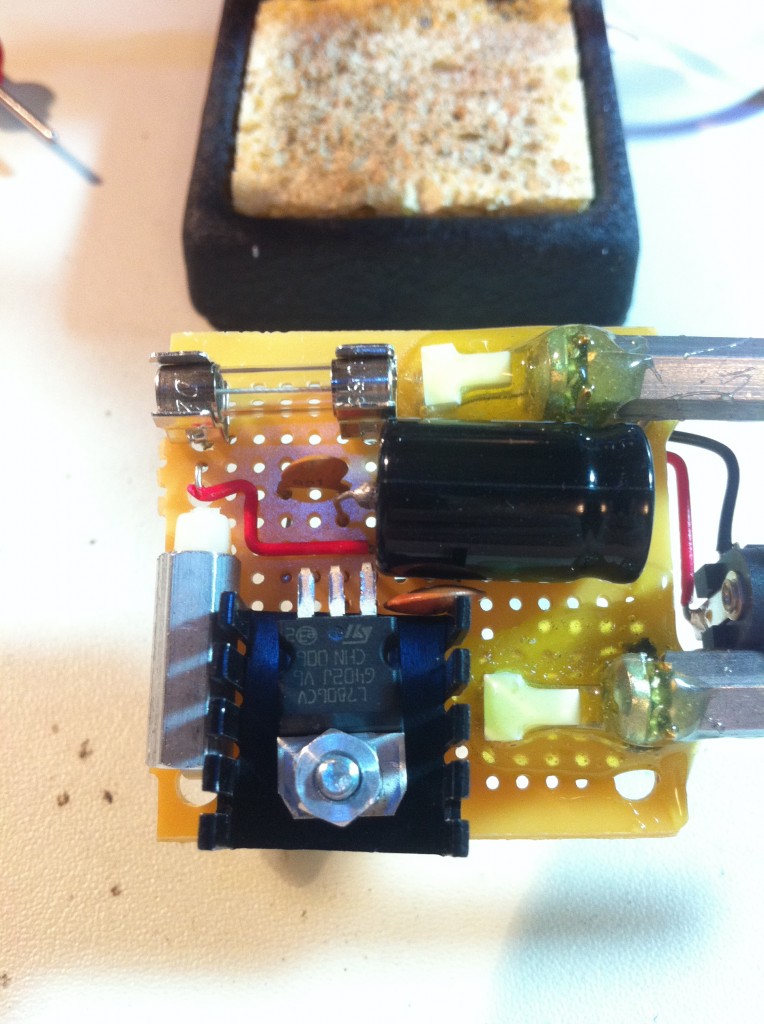 Here's the completed circuit. Note that I threw a 250mA fuse on there for good measure. Never a bad idea when playing with mains power. The heatsink is almost certainly overkill here, but again, it won't hurt. On the right you can see the back of the DC power jack, zip-tied to the side of the positive prong because it was handy to put it there, and the protoboard was full. 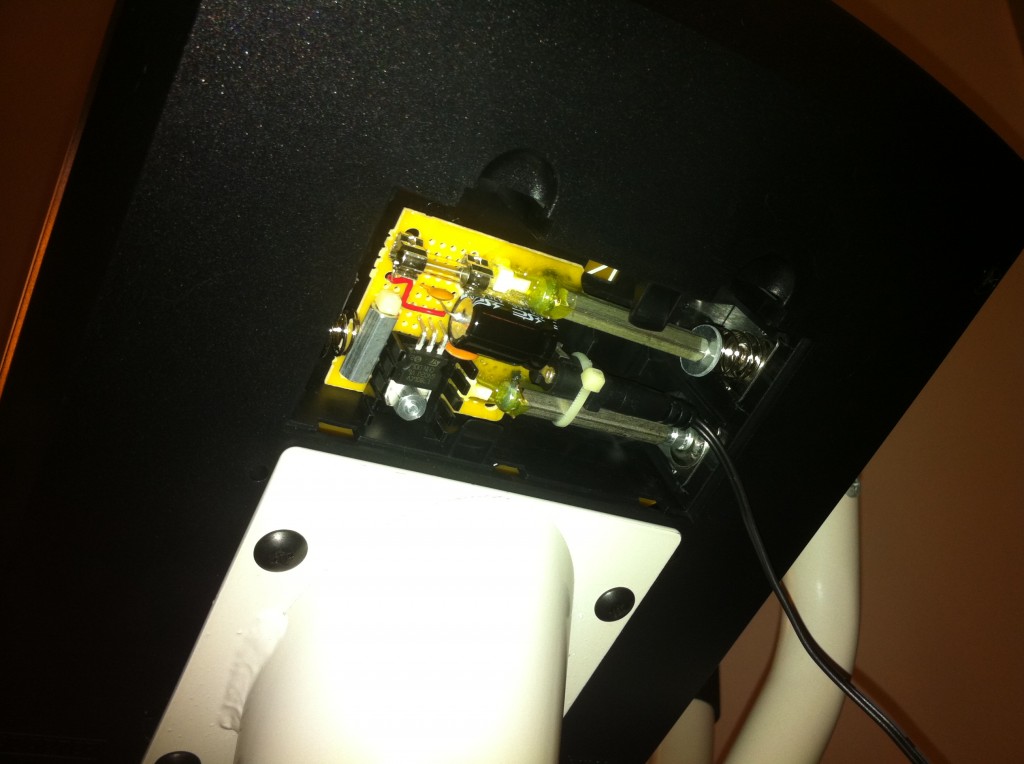 Here's the final circuit mounted in the machine. It's held in entirely by the battery terminal springs, and it's very secure. The cord runs out through a gap in the battery panel, so the whole thing is completely stealth and reversible. 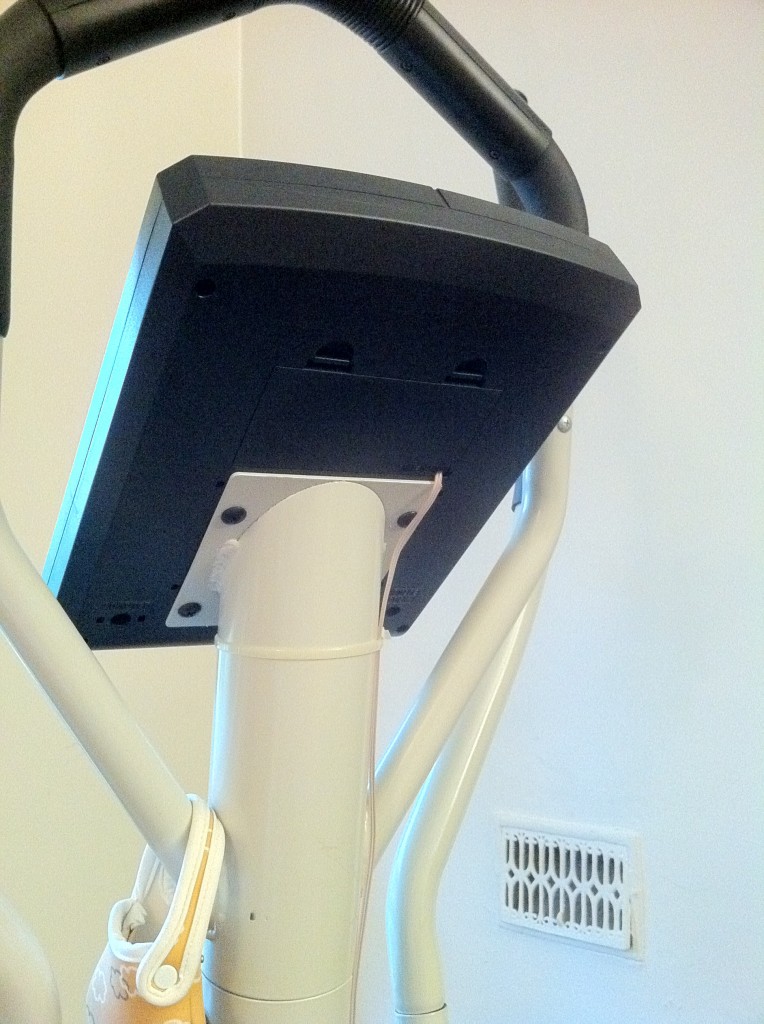 To finish it off, I managed to find some clear cable on the junk pile to run down to the bottom of the machine where the wall wart is. I think it was an FM antenna or something. It was a nice match, anyway.

That’s it! What do you think? Is my love of epoxy doomed to end in heartbreak? Have I unknowingly made my exercise corner into a fire trap? Let me know in the comments.