Sometimes, an idea seems so great that you just can’t let it go, even though you should. Today’s hack is one of those, and it’s not headed where you think it’s headed.

Previously, I got the IIc Plus up and running, and booting software. However, I’m not actually able to use it for anything because my stopgap display solution is too low fidelity. Besides, the IIc deserves better than some crappy digitizer pumped into a tiny window on some other screen. These machines had big, bright color displays which were amazing to look at. The world was not yet full of HD LCDs everywhere you look, so a big computer-controlled color display was something to see.

There are a couple of options here. The first is to simply buy a monitor with a composite input. There are some still available. However, they are generally 16:9 aspect ratio. It’s getting very tough to find 4:3 aspect screens anymore. Sure, some widescreens can pillarbox the content to show 4:3 in the center, but that always sort bugs me. I also want something that suits the machine visually. There are lots of cheap plastic junk monitors for sale online, but I don’t want any of them sitting next to my IIc.

The second option is to hack something. I know I don’t have to go any further- you already know what I’m going to do.

First things first, I need a screen. It needs to be around 10″ in size, decent resolution, color, 4:3 aspect, and of course, cheap. 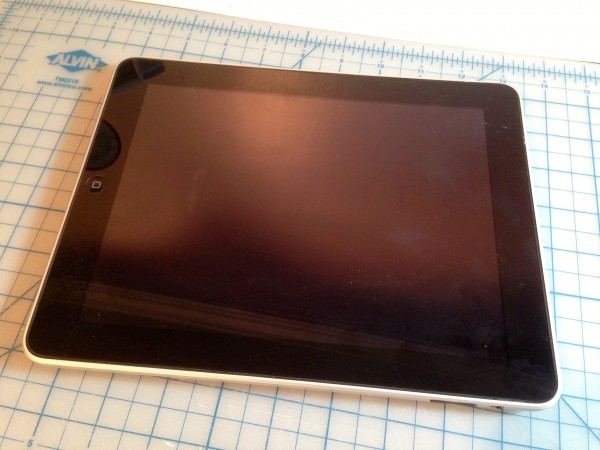 Yep, the junk pile coughed up an original iPad that has been gathering dust since 2010 or so. The sad fact is, it works perfectly fine hardware-wise. However, it is no longer supported by iOS, so there’s virtually no useful software that it can run. Sure, I could jailbreak it and do some stuff, but I have a better idea. It’s thin, light, color, and 4:3 aspect. Let’s make an Apple IIc monitor out of it.  Aside from the joy of upcycling this thing rather than wasting it, there’s something cosmically satisfying about using a forced-obsolete Apple product to breathe new life into a classic-and-still-useful Apple product.

We need to separate the iPad screen from the guts. There’s something called a “metal spudger” that you’re supposed to use for this. However, if you don’t care about the iPad surviving the process, a razor blade and small screwdriver work fine. All that is needed is to pry the edges of the screen up all the way around. A bunch of internal mounting clips will get broken since we’re not using the right tool for this, but “meh”. 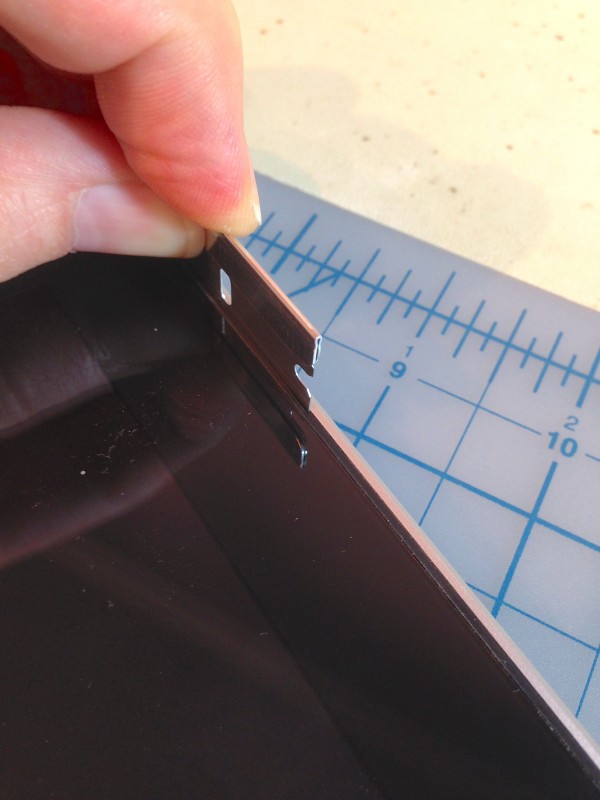 There are spring clips holding the screen into the back panel. You can use a spudger to carefully release them, or jam a razor blade in there and break them all. Guess which method I used.

Here we have the guts all laid out. The screen assembly on the right includes the display, backlight, capacitive touch panel, bezel, and the Home button. On the left is the logic board, batteries, and casing. You can also see all the shit that broke taking it apart. See earlier, re: “meh”. Once inside, everything is held together with T4 Torx screws. 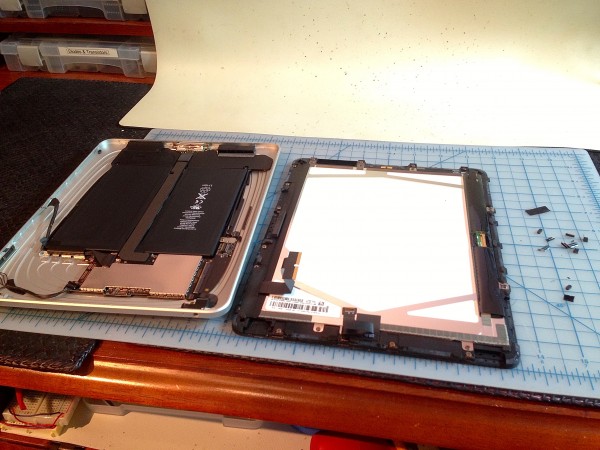 Lots of useful bits in there, actually…

Let’s take a quick sidebar to dismantle the other half as well. Why? If you have ask why I would take something apart that doesn’t need taking apart, you’re reading the wrong blog. 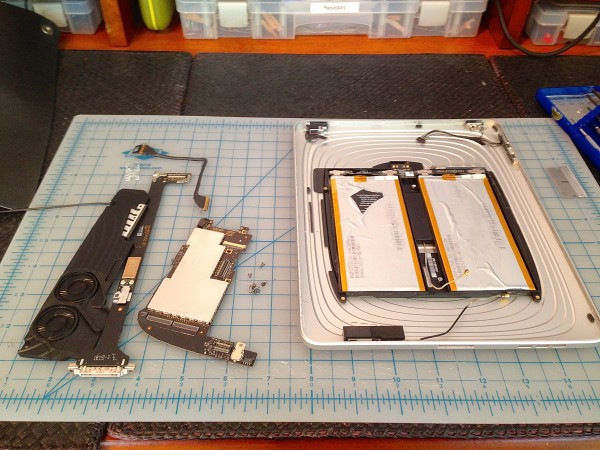 Lots of little screws and some black tape hold it all together.

Visible there is the speaker assembly (they look like little fans), a main harness that connects the Dock port and Wi-Fi antenna to the motherboard, the motherboard, various switches and sensors, and a power harness. Still mounted in the case are the Li-Ion batteries. They were covered in a layer of black tape which I’ve removed. The batteries themselves are held by a plastic frame bonded to the case, but are otherwise removable. Well, sort of- the tabs are spot-welded to a harness which may or may not be removable. I’m opting to leave it be for now. 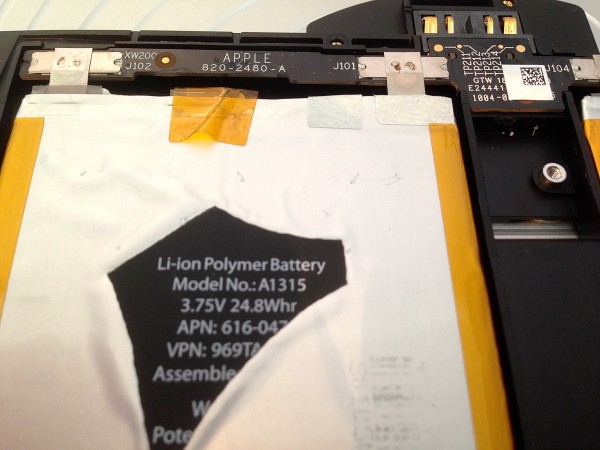 heyz apple, iz inside ur devicez takin all ur stuffz

What I hope to demonstrate here is that modern electronics are absolutely hackable. They can seem very intimidating because of the lack of visible fasteners, and high level of miniaturization. However, anything that is assembled can be disassembled, if you have the right tools. In the case of Apple products, a set of spudgers is usually all you need. At worst, sometimes a heat gun is required to release adhesives. If the product in question doesn’t need to survive disassembly, things get a lot easier.

As you can see in the above photo, modern or classic, electronics haven’t changed as much you might think. It’s still assemblies joined by harnesses, mounted in an enclosure. Things have gotten smaller and the connectors are more exotic, but that’s why we have head-mounted magnifiers.

Okay, we’ve murdered an iPad for science, now what? Those screens sure as smurf aren’t usable on their own. In fact, the iPad screen is, like most consumer devices these days, interfaced with a high-speed Low Voltage Differential Signal serial protocol. This is not very easy for us to talk to, especially when what we have is a composite video signal. What’s needed is a driver board. Luckily, thanks to globalization, driver boards for every LVDS panel under the sun can be bought directly from China. If you have an LCD you want to reuse, you can. It’s just a matter of finding the right driver board. That can be easier said than done, but AliExpress or eBay will have what you need. 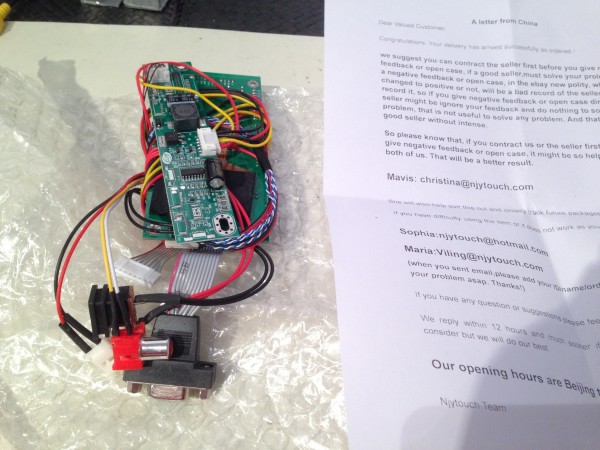 This LVDS driver board is designed specifically for talking to early iPad screens. It’s sold on eBay and AliExpress by user njytouch

So, bully for us, we’re all set, right? Let’s hook it up and see what happens. It needs 12V, and the package came with boards to drive both the display and the backlight (but not the touch layer). 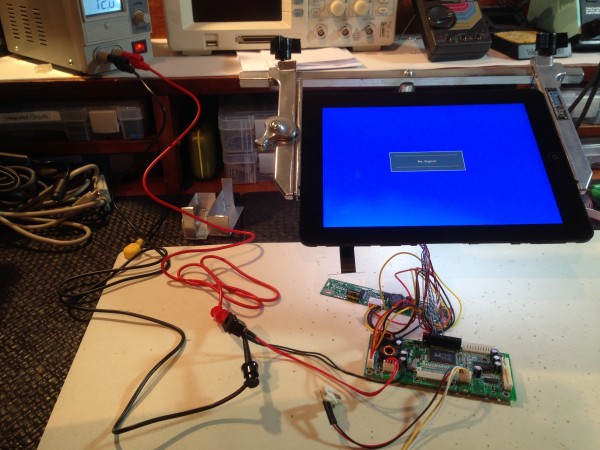 Well, that’s encouraging. The backlight is on, we have a blue screen, and a “no signal” message.

Now for the IIc Plus… 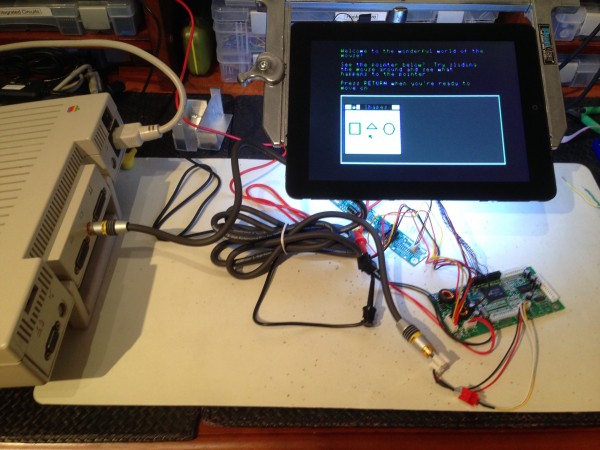 Sad face. It works, barely, but the image is garbage. The vertical sync is shaky, and the pixels are so blurry you get a headache from looking at it.

It wasn’t clear if the driver board has a crappy composite decoder, or if it doesn’t like the not-quite-NTSC output of the IIc. I tried another composite source, my digital camera. 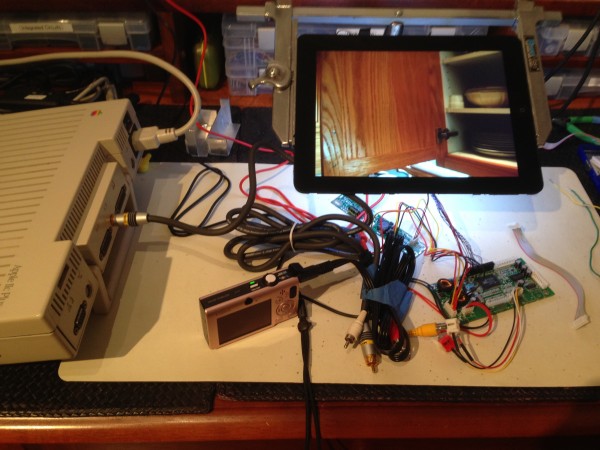 Slightly better, but not much. The picture is still jittering, and the image is not very good.

Not yet deterred, I thought maybe it’s being fussy about the power supply. I don’t know how noise-free my bench supply is, and I learned on Veronica that display circuitry can be particularly fussy about power quality. 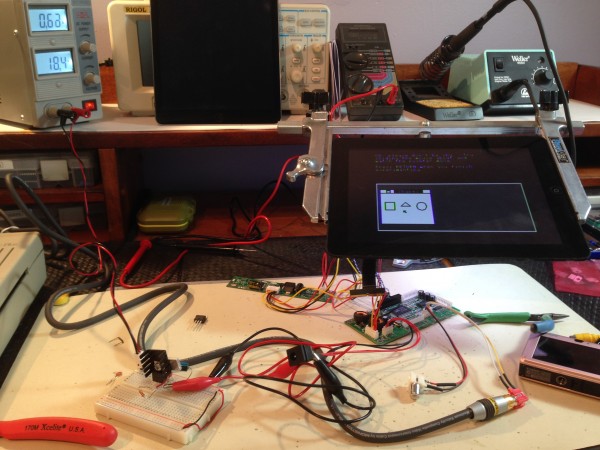 I built a little power filter/regulator on the breadboard, based on a 7812. Sadly, it made no difference.

This was the hardest part of this hack- knowing when to fold ’em. I really really love the idea of turning an iPad into a display for my IIc, but this driver board just seems to be garbage. It might be useful for some other purpose where quality is less critical, but for my IIc’s main display it isn’t going to cut it. There are other similar driver boards on AliExpress, but this is the only one I could find specifically designed to drive the iPad display. Furthermore, it took many weeks to get it shipped here, and I was in no mood to wait many more weeks just to spend more money and try another board that might not work.

For Plan B, I thought I’d take apart an existing LCD display that I have. I’ve been using it for Veronica, and it doesn’t have a composite input. However, just because a monitor doesn’t have a composite input, doesn’t mean the driver board inside can’t support one. Oftentimes manufacturers continue using old boards inside products with obsolete features on them, but they remove the connectors and external support points to save cost. If users no longer want a feature, it’s cheaper to continue making the same board, but simply remove external access to the feature. 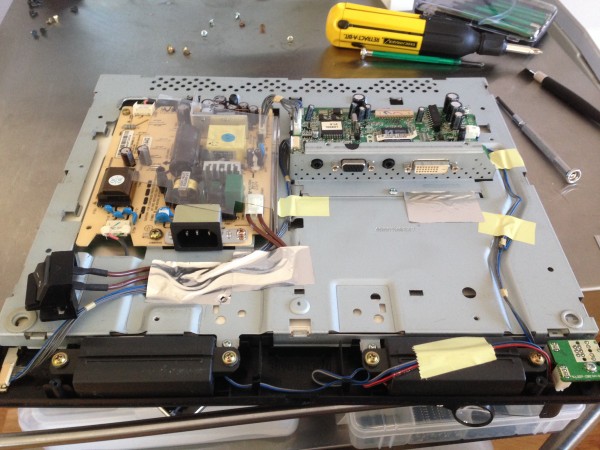 Inside the guts of this old LCD display, I find the hoped-for driver board. Sadly, it does not have any support for composite on the PCB. It’s just a bit too new for that, I guess.

Okay, Plan C. I’m going to acquire a monitor with a composite input and modify it for my needs. However, I have some unique requirements that are difficult to fulfill without spending a ton of money:

If you just search usual sellers of electronics, such as Amazon or New Egg, you’ll click around until you’re blue in the face and never find something that meets those requirements (ask me how I know). The key to sourcing a part for a project is often understanding the kinds of markets that use the types of parts you need.

In this case, the usual markets for LCDs, such as TVs and computer monitors, have long since gone to 16:9 aspect ratio, and are always much larger than I need. With a little research, I found the following market segments still use smaller-size 4:3 LCDs with composite inputs:

The answer came in the form of the Night Owl 8″ LCD security monitor. It’s 4:3, has composite inputs, and cost less than 80USD (as of this writing). This is what the doctor (Quinn, Medicine Woman) ordered. I took a chance that it would render the IIc’s output nicely, and my gamble paid off.

Finally, a solution that works for all my requirements.

The picture quality is great, even on the notoriously-difficult 80-column text display. It’s hard to find something that renders this text mode properly, but this little budget security monitor does so without breaking a sweat. 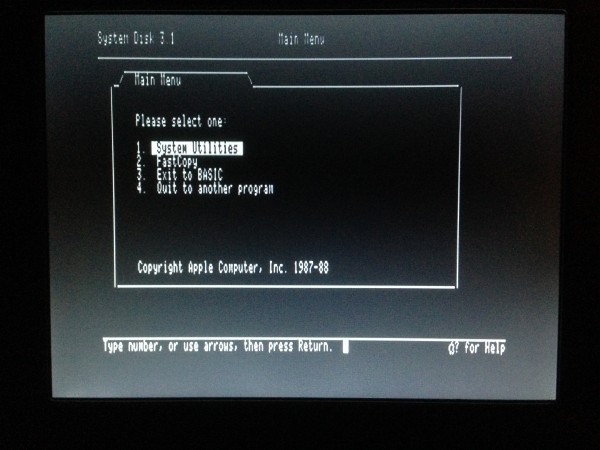 The photo is a touch blurry, but in person, this 80-column text is stable and sharp. Huzzah!

Of course, I’m far from done with this display. As I stated at the top of the article, I don’t want some plastic junk display sitting next to my IIc. This security monitor currently fits that description, but not for long. I have big plans for it, so stay tuned. In the meantime however, I can finally get my Choplifter on.

15 thoughts on “Apple IIc Plus – Display”