If you had told me ahead of time how much trouble the RAM board would cause, I would not have believed you. It’s the simplest Veronica board by an order of magnitude, yet it seems to be punching well above its weight class in terms of causing grief.

After sorting out the connector alignment issue, I was finally ready to get back to making forward progress. Well, not so fast. I started working on the ROM code, but it didn’t seem to be flashing properly. As you may recall, Veronica has an onboard EEPROM programmer, so I can change ROM code with my AVR programming dongle. The code upload from my assembly toolchain seemed to be proceeding normally, but the code wasn’t sticking. Then I noticed something very alarming- on the bench supply, the current was spiking over an amp when programming ROM. Yikes! Luckily, I seem to have to have noticed in time, and no damage was done.

This time around, it’s not a case of struggling to figure out what’s wrong, but rather how to fix it with the least hassle. The problem was obvious, and it’s a design flaw on my ROM board that I’ve known about for a long time. It was never a huge issue, until now. Let’s quickly review my ROM board schematic:

Note this is Rev E, which has had some improvements since I last posted about my ROM board.

See the problem? The ATtiny uses those shift registers on either side to write into the EEPROM when the ROM board is in programming mode. The problem is those shift registers are sitting right on the system bus (note the direct connections out to the edge connector). What’s needed there are some 74HC541 tri-state buffers, so that the EEPROM can be isolated from the system bus during programming. This has never really been a problem before, because during ROM programming, the CPU is isolated from the bus, and nothing else in Veronica drives the address or data lines. Until now.

Yep, the shiny new RAM board is driving the data lines any time an address within the decoded range is found. Because of how the EEPROM programmer shifts addresses serially on to the bus, virtually the entire range is being hit, even though the ROM only occupies the top 4K of the address space. So during the programming operation, there’s all kinds of bus contention going on between RAM and the EEPROM programmer, which leads to some near-shorts and subsequent very high current draw. Not to mention, all that contention utterly ruins the EEPROM writing process, so code uploading doesn’t work.

To fix this, I have a few options. The simplest is to simply pull the RAM board out of the backplane during programming. However, that’s tedious, hurts iteration time on ROM code, and is likely to damage the board sooner or later. The most correct fix would be to add those missing buffers to the ROM board. The ROM board should not depend on any knowledge about the state of the system bus to do its job of injecting code into the EEPROM. However, that’s a difficult fix. It’s a complex board that is already packed full, and it would need a complete redesign to accommodate three buffer chips. I’d like to do that at some point, but it’s way more effort than I want to put into this problem right now.

Luckily, I have another way. To explain it, let’s back up a bit and explain how I program the ROM on Veronica. Take a look at her front panel: 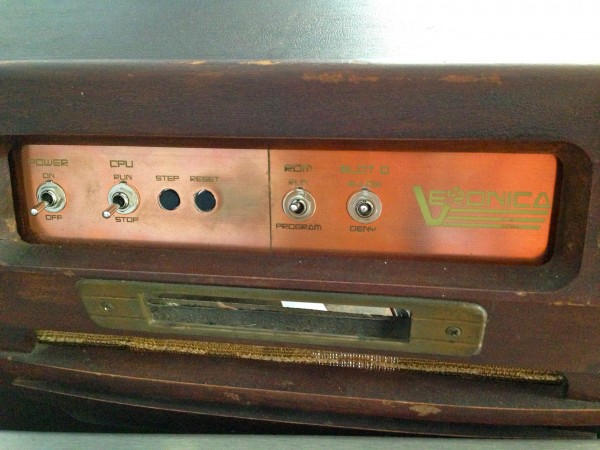 The panel is looking a little dirty these days. It’s been working hard!

We’re interested in the toggle switches here. Left to right, they are Main Power, CPU Run/Stop, ROM Run/Program, and Slot 0 Allow/Deny. These all play a role in programming the ROM. When the AVR dongle is plugged into the ROM board, and I’m ready to upload code, I do the following:

Within that procedure lies my workaround. I have the Bus Master line which is kicking the CPU off the bus during programming. I can use the same line to kick the RAM board off the bus. This is less elegant than having the ROM board isolate itself from the rest of the system, but it will be much much easier to implement.

Here’s where planning ahead a bit can really pay off. When I made a new Backplane recently, I tied all the Bus Master lines on each slot together, and tied them High. This line was originally intended for use by an active backplane arbitration circuit, but I’ve since dropped that feature. However, I felt it may still come in handy one day to be able to kick cards off the bus. That day is today. In anticipation of this, I left those traces thin on the backplane so they would be easy to cut and repurpose. 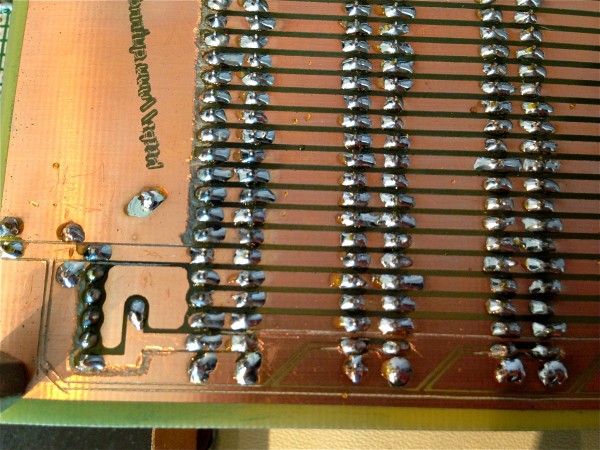 Notice the second-from-the-bottom pins of each slot are connected to a thin trace that runs over to Vcc. Try not to notice what a train wreck the etching job on this board is. You can see from the URL how badly I misaligned the exposure masks. Hence all the cutting and grinding that was done to rescue it.

So, it was a simple matter to cut the Bus Master trace on one of the slots, and patch it into the five pin header at the end of the backplane where the arbitration circuit connects. The “arbitration circuit” was supposed to be something smart, but is now just the Slot 0 Allow/Deny switch. 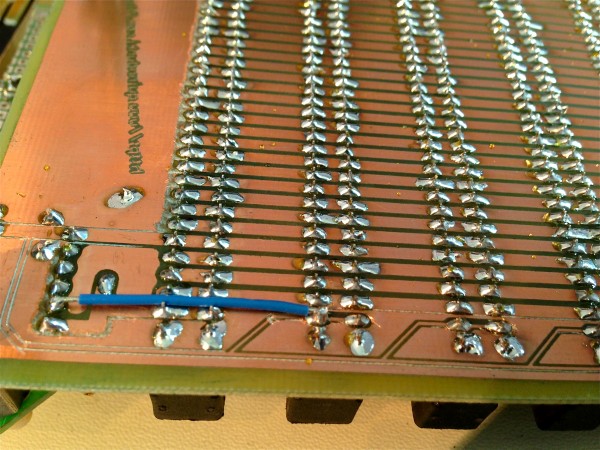 One snip and one jumper later; presto, front-panel control of slots 0 and 1 from the Allow/Deny switch.

The last piece of the puzzle is to hack the RAM board to respond to this Bus Master signal, and pull itself off the bus. This could be done with tri-state buffers again, but that would require a rebuild of the RAM board. Instead, I can use the Output Enable lines on the RAM chips, which weren’t previously needed (and were tied low). The only catch is, this Output Enable is active-low, and my Bus Master signal is active-high. D’oh! Normally I can find a spare inverter or NAND gate somewhere on the board and pilfer it for a hack like this. However, this board has no such spare bits. I need one single inverter, dammit!

Well, my mom always said, if in doubt, superglue a transistor to the ground plane*.

*my mom has never said this. She has more sense than that. 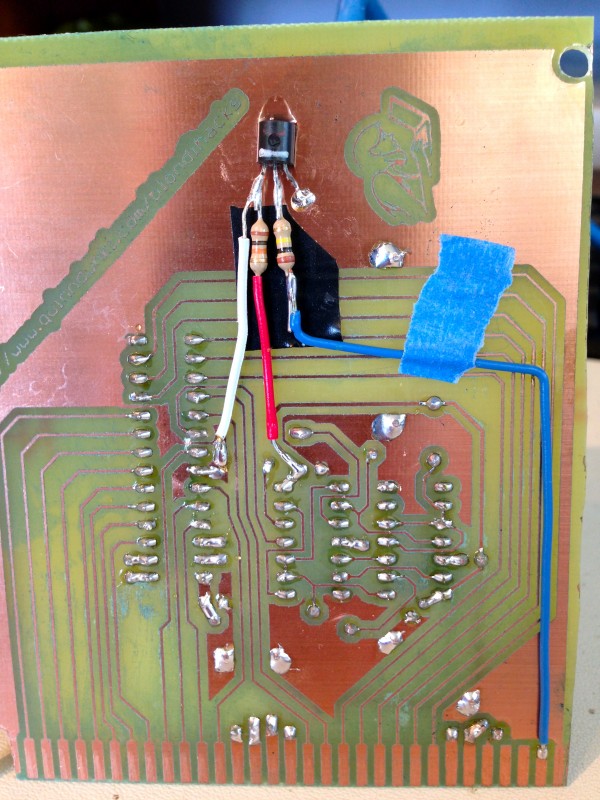 If there’s time to do it, there’s time to way, way overdo it. I joke a lot about “going old school” on this site, but a discrete transistor Not gate? Now we’re we’re going… um… ancient school?

Clunky, yes. Ugly, yep. Way more power rating than needed, yup. But, it works, and it was all parts I had in the junk bin.

And now, yes, finally, I really can get back to business. I mean it. For reals this time. *fingers crossed*.