Every pinball machine from about 1980 onwards (the solid-state era) has a diagnostic control panel inside it. This is a set of buttons used to control service menus for running game tests, setting prices, gathering gameplay statistics, modifying game rules, and anything else an operator or technician might have needed to do. It has arguably become an even more important tool as these games age, because breakdowns become more frequent. Personally, I’ve probably spent as much time in those service menus as I have playing the game. At least, some days it feels like that. Johnny’s reliability is improving as I gradually fix all the stuff previous owners have neglected, but it’s a process, to be sure.

Ironically, Johnny’s diagnostic panel was itself in a very sorry state. When I first interacted with it, I thought there was something wrong with the software. None of the buttons were behaving correctly. Starting a test would reboot the game, the menus were scrolling oddly, and it was general chaos. It finally dawned on me that the buttons were installed backwards, so the labels didn’t match the functions. Once I got used to that, the panel was usable, but still awkward. The worst part is that the  bracket was mounted with a makeshift arrangement of nuts and standoffs at a single point, so the whole thing was unstable. You had to brace it with one hand while pushing the buttons, and it drove me nuts. The whole thing needed a going-over. 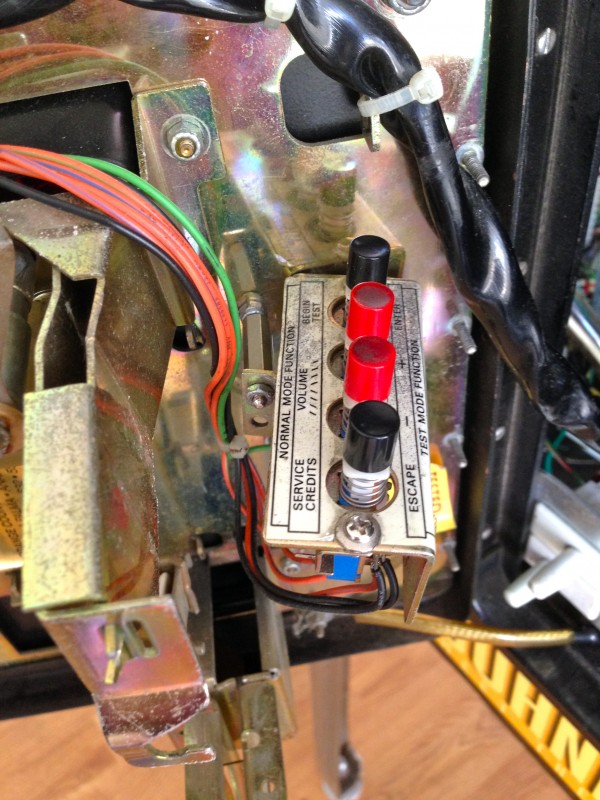 This thing is loose, the button labels are wrong, the harness is routed poorly, and it’s generally annoying to use. It’s also filthy from 20+ years of grubby operators’ meathooks.

The root cause of most of these issues is that the bracket holding the buttons is actually the wrong one. Who knows where that one came from. It seems like it’s a Williams bracket because the labels are correct (despite being reversed relative to the buttons), but the mounting points aren’t even close. I thought all Williams machines used the same bracket, but perhaps not. It’s all part of the secret lives of pinball machines. 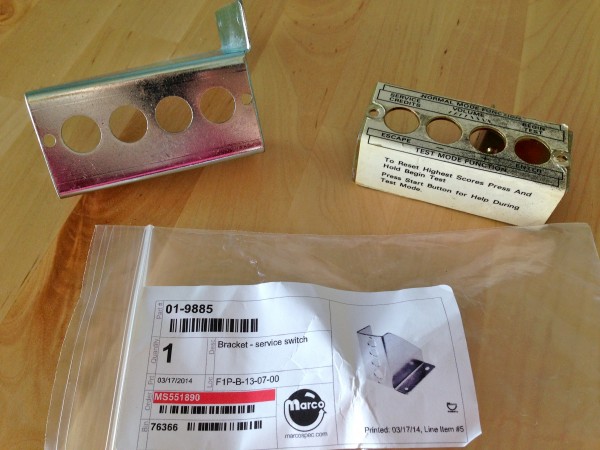 Conveniently, the correct bracket is still available from Marco. I’m not sure if it’s a reproduction, or New Old Stock, but it’s correct, and that’s what counts.

If it was as easy as bolting on a shiny new bracket, there wouldn’t be a Blondihacks post about it, so regular readers know things are about to get messy. In this case, quite literally.

The main challenge here is, the replacement bracket doesn’t come with the artwork on it, labeling the buttons and providing instructions. I’m forgetful, so I want this labeling. I also just think it’s neat. I wasn’t able to find a replacement label anywhere, so I had two choices: move the existing label over somehow, or reproduce the artwork myself.  The former seemed worth a shot, and easier if it works, so that’s what I tried. I figured I had nothing to lose. I took lots of pictures of it first, in case I destroyed it and end up needing to reproduce it after all. 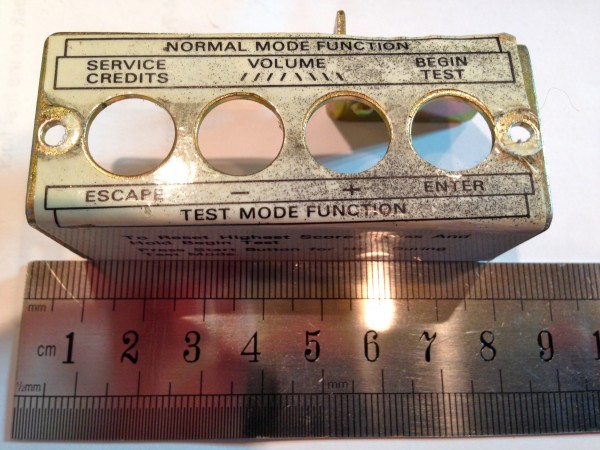 I took lots of pictures like this, so the artwork could be scanned, sized, cleaned up, and reprinted if needed. 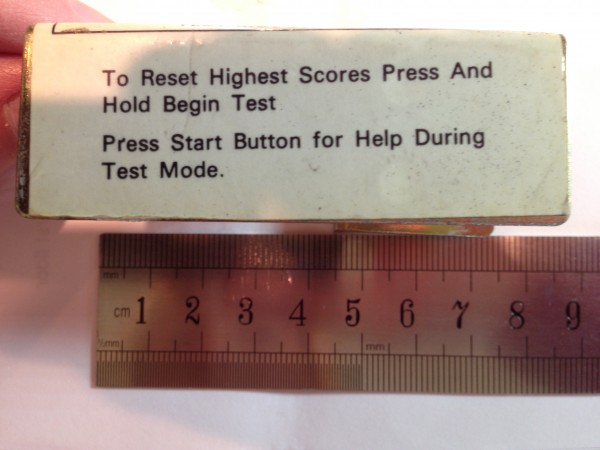 I like the little details like this on the machine, so I want to save it if I can.

The challenge here is dissolving the glue under the label, without ruining the label itself. There are lots of products that work great for removing labels from things, such as naphtha (aka lighter fluid) or Goof Off. Most of those techniques are for when you don’t care what happens to the label, however.

Instead, I fell back on an old trick from my days in the AFOL (Adult Fan of Lego) community. A common problem with Lego collections is gunky old stickers messing up pieces. Most glue solvents would also destroy the plastic, so another technique is commonly used- olive oil.  Yep, believe it or not, olive oil is a functional solvent for most kinds of glue used on paper products. It’s messy and slow, but it is gentle, and generally doesn’t hurt the label itself. 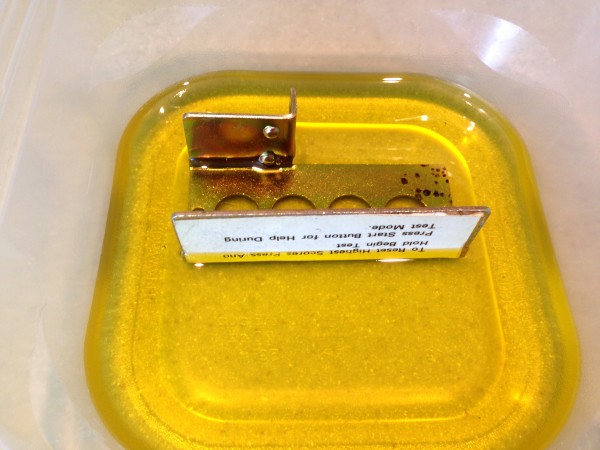 So, the next step was to soak the label in olive oil. Fingers crossed!

I’ve used this technique before, and always had good luck with it. Unfortunately, it didn’t work quite as well here, because of one detail. This isn’t a typical paper label- it has some kind of laminated plastic coating on top of the paper. This is nice for durability, but it means the olive oil can’t soak through the paper into the glue. It can only get to the glue around the edges, so the process became one of soaking for a while (say, 30 minutes), peeling the now-released edge up a bit to expose more glue, then soaking some more.

In the end, the process worked, but not as well as it has for me in the past. About half of the paper got left behind, partly because of the laminated surface, and partly because I was too impatient with letting the oil soak in between peelings. The process was taking all day, and I wasn’t trying to do a perfect restoration here. I just wanted a serviceable label on the new bracket. Impatience got the better of me a bit, in hindsight. 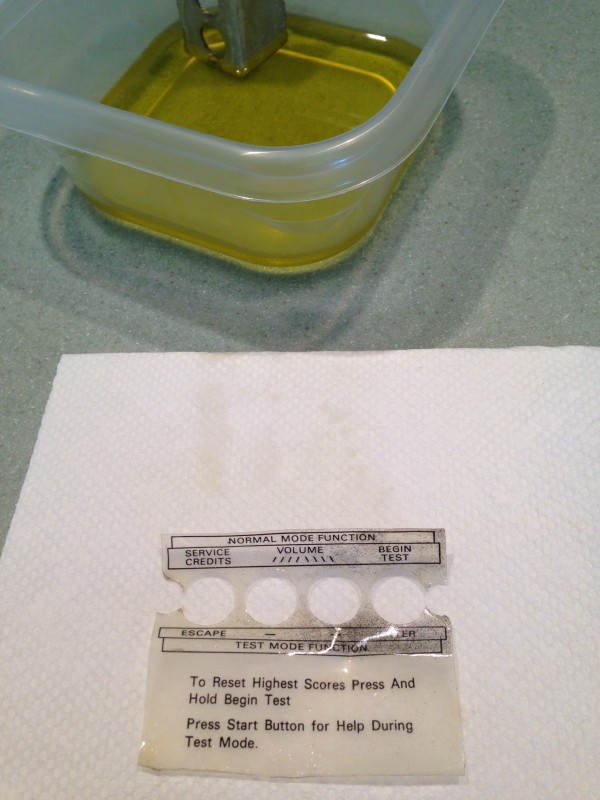 Here’s the label, fully extracted. It looks pretty good, in the end, but could be better if I’d taken more time.

I gently cleaned up the label to get the olive oil off, and also the old finger smudges. Unfortunately, the black speckling you see above is overspray from someone’s hamfisted spray-paint touch-up job on the cabinet. There’s nothing that can be done about that, short of reproducing the label from scratch.

Next, I masked off the label’s footprint on the new bracket, and applied some spray adhesive. 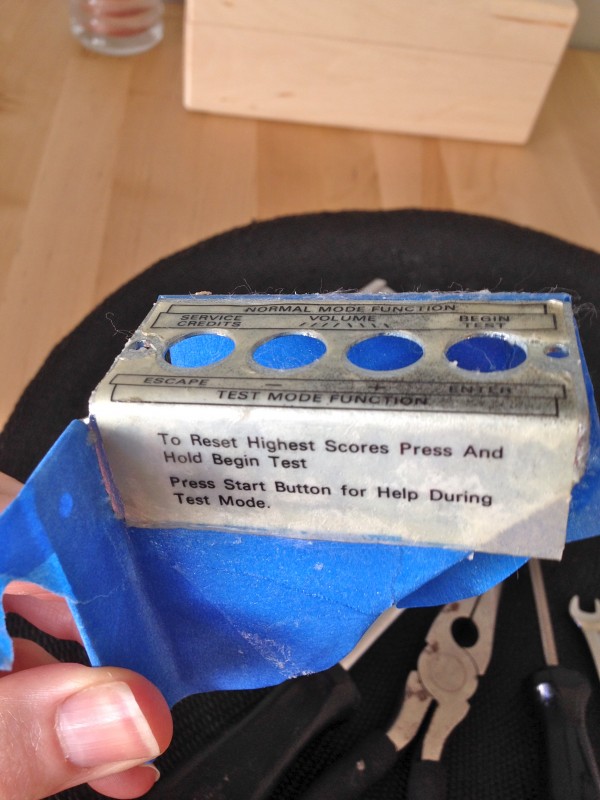 I wiped down the new bracket with some alcohol to remove any oily residue that would interfere with the glue. As it dried, I smoothed out the bumps and ripples you see above.

Spray adhesive is kinda messy stuff, so the bracket needed some cleanup afterwards. If I were to do this again, I would paint the bracket white under the label. The removal process left some thin spots in the paper, so the opacity of it varies a bit. 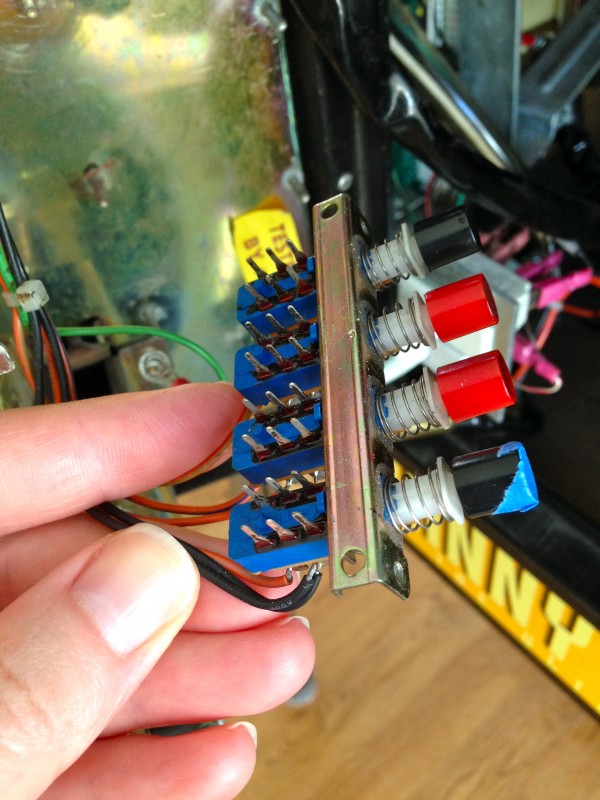 While the glue dried, I cleaned up the buttons themselves with alcohol and cotton swabs. The solder joints and wiring are all in good shape, so no work to be done there. I marked the Enter button at one end with tape, to avoid making the same mistake the previous repair person did!

I wanted to make sure I put the panel back in the correct orientation- not just matching the labels, but correct relative to the machine as well. Not having another early 90s Williams pinball machine handy to compare it to, I made an educated guess from a diagram in the manual. 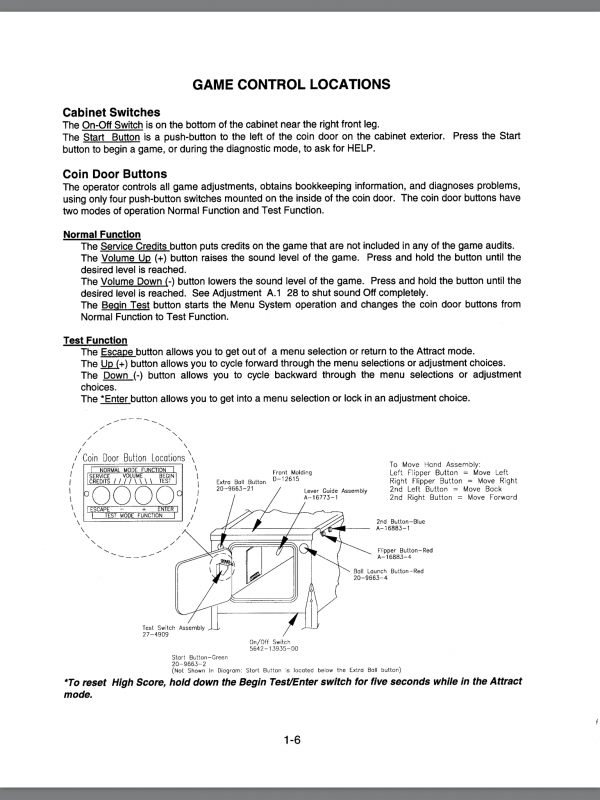 This is the only diagram I could find referencing this panel, but it seems to imply the Enter button goes on the outside of the bracket. That seems to jive with how the label would be oriented when placed on the bracket, if the bracket is installed as shown in the line art. Good enough for me! 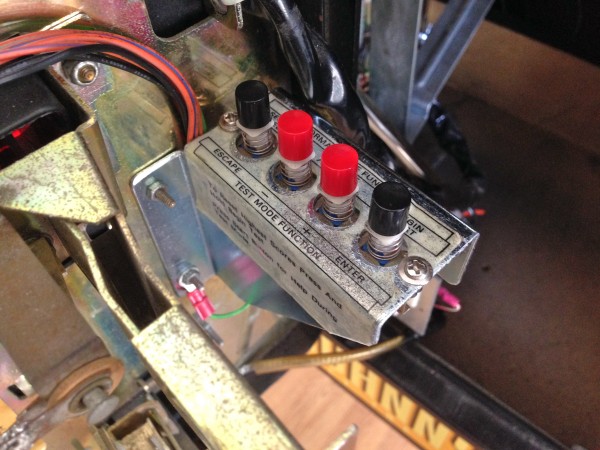 Here’s the final panel, back in the machine. Correct labeling, solid feel, clean buttons, correct harness routing, and good times had by all.

This was a simple afternoon project (not counting all the waiting-for-olive-oil-to-soak time), but it made an appreciable difference in the enjoyment of ownership. Now I can get back to the list of 200 other things that need attention!