Veronica has developed a minor problem. She’s outgrown her backplane! When I started this project, I thought a fair bit about how big I should make the backplane. I settled on four slots for a number of reasons:

Well, reason #1 turned out to be woefully incorrect, because I’ve been getting much less on each PCB than I intended. Veronica’s entire design is largely based on making units that will fit within one PCB in the limited free version of Eagle. This isn’t just a case of being too cheap to buy the full Eagle (though that’s also true 🙂 ). The 4″x4″ board limit is also a good size for home etching. Larger boards need a lot more chemicals, bigger containers, a larger vice to hold while soldering, more reach from the drill press- more everything.

Case in point- I had planned to put RAM and ROM on one board to share address decode logic and such. However, I needed to build the EEPROM programmer in with the ROM, and I made the (probably silly) decision to use smaller (let’s call them “nostalgic-sized”) RAM chips. Using a single fat modern RAM chip felt like cheating, and this is supposed to be a computer in the spirit of the 1980s. Having to use lots of small RAM chips was a big factor in the design and board layout of 1980s home computers, and I wanted to have that experience. All these factors compounded to where I was forced to split RAM and ROM on to their own boards.

Reason #2 is still valid- I want to keep the system boards fairly small, both because they’re easier to work with, and because my enclosure is now committed to this form factor. However, the backplane will have to be larger than one 4″ x 4″ board. Luckily, we can get around this problem, as you’ll see.

Reason #3 is a good problem to have, I suppose. I’m arguably further along with Veronica than I ever thought I would get. Of course, I dreamed of going “all the way” to a full blown computer, but deep down, I didn’t know if I’d really get within striking distance of that. I’m not there yet, but I’m certainly seeing light at the end of the tunnel.

Luckily, my initial decision to go with a modular design on Veronica is paying off, and I can quite easily build a new backplane. All I really needed to do is take my initial backplane design and double the width of it. I can’t do that in the Free version of Eagle, but luckily the backplane is such a simple “circuit” that I can do the work entirely in Photoshop (or Gimp or other image editor). I took the original etching mask from my backplane, loaded it into Gimp, and simply copy-pasted the whole slot section. Then I went in and fixed up all the joints and edges with various pixel-pushing tools. While I was there, I fattened up the traces from the original, and simplified the control lines a bit. I had visions of an active backplane that negotiated communication between slots for DMA and such, but that seems like a silly unnecessary diversion now. So, here’s the result of my Gimping: 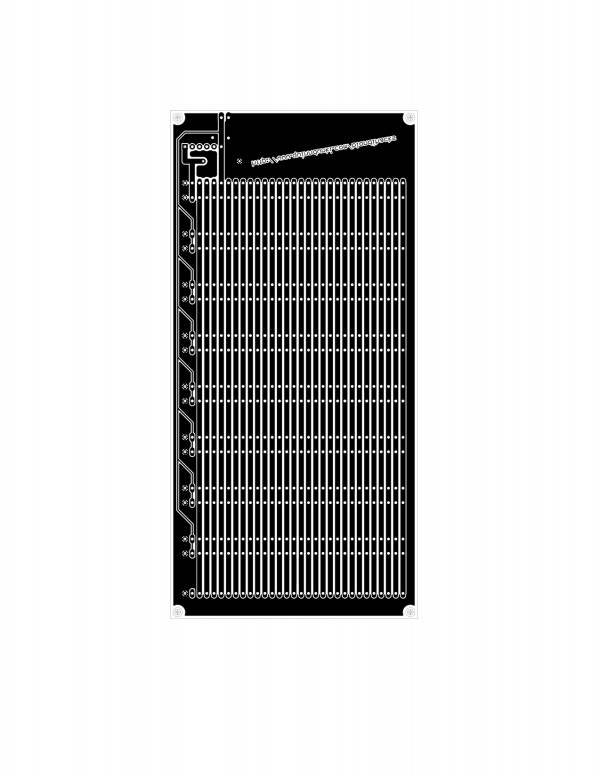 Unfortunately, what should have been a quick side project turned into a much larger one, because I got a bit careless with the etching. As you may recall, I always print two copies of the mask and double them up to make sure they’re dark enough for the UV exposure. It’s something I do as a precaution, but I’ve never actually verified that it’s necessary. In any case, that practice bit me here, because in my haste I knocked the masks out of alignment slightly, and ended up with a mess in one corner and down one side. It was fixable, but took quite a bit of Dremel and knife work. It was debatable whether it would be quicker to fix it or etch a new one. I think it was quicker to fix it, but just barely. 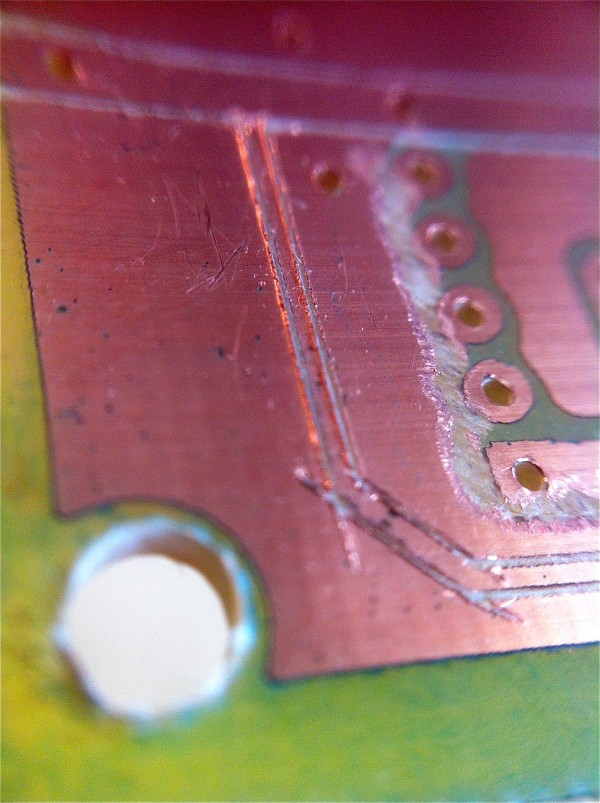 This is just one part of the repaired damage from my careless mask alignment. The ends of the main bus traces all had bridges to the ground plane as well.

So, I think in the future I’ll drop the pretense of doubling up the masks until I’m sure it has value to do so. A single mask is much easier to align, and eliminates a big source of error.

After all that, though, I did end up with acres of new real estate. 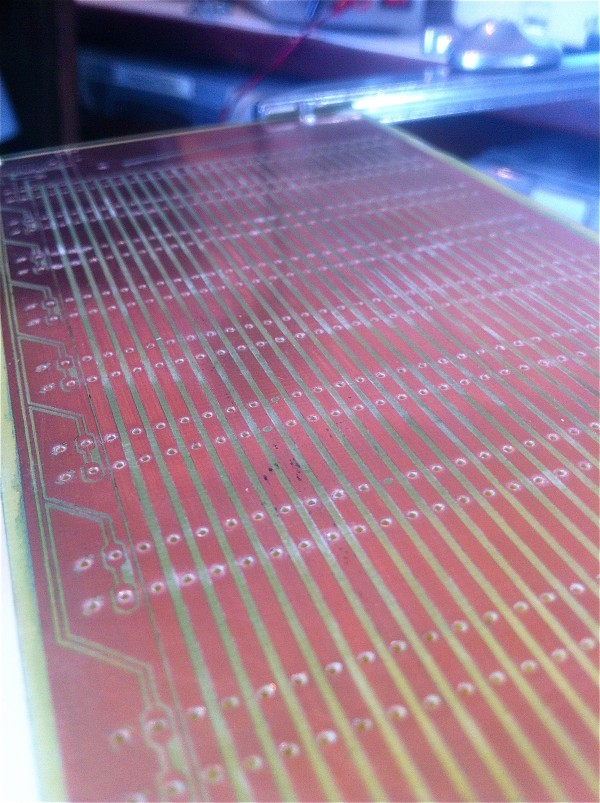 So much drilling. I’m very glad I invested in the Dremel Drill Press stand for this. Reader Contest: I missed some holes with the drill. How many?  The first person to comment with the correct answer will win nothing at all. 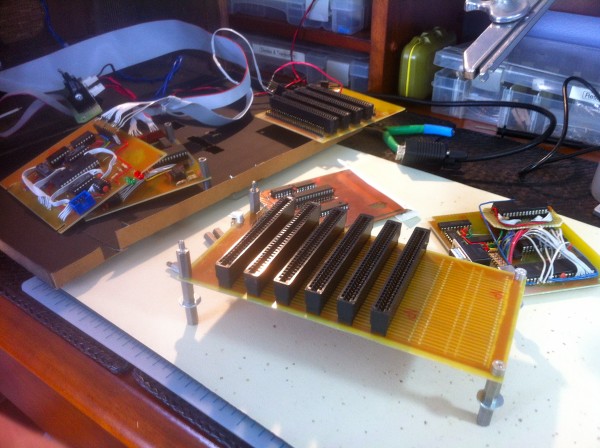 Assembly under way. Wouldn’t you know, I ran out of the slot connectors. I considered pillaging the old backplane, but decided I’d rather order more. The old backplane is a valuable known-quantity if I have any problems with this new one. The original has proven itself to work perfectly, which eliminates a variable if a card isn’t working. Veronica looks so sad with her bits spread all over the bench like this. 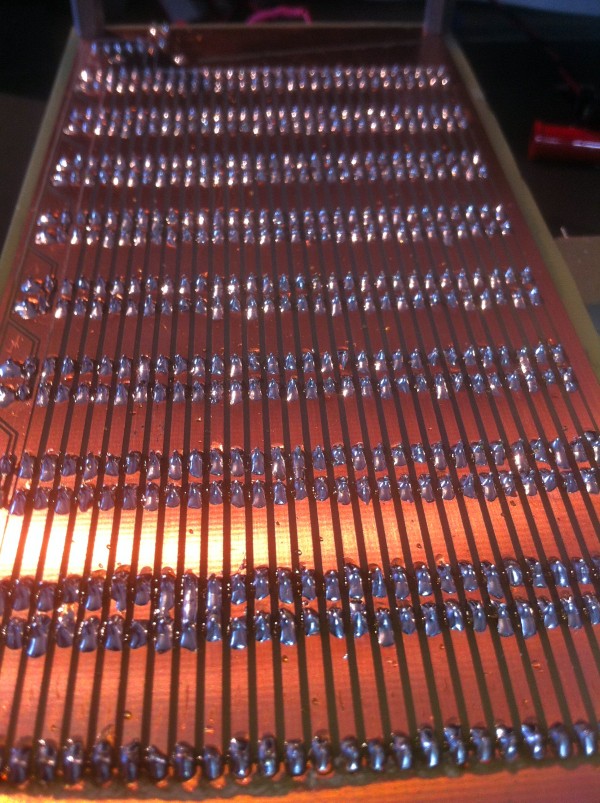 If you want to improve your soldering technique, try making an eight-slot, 62-pin backplane by hand. That’s over 500 connections, if you include power supply and control signals. By the end, you’ll be a pro. Wax on, wax off! 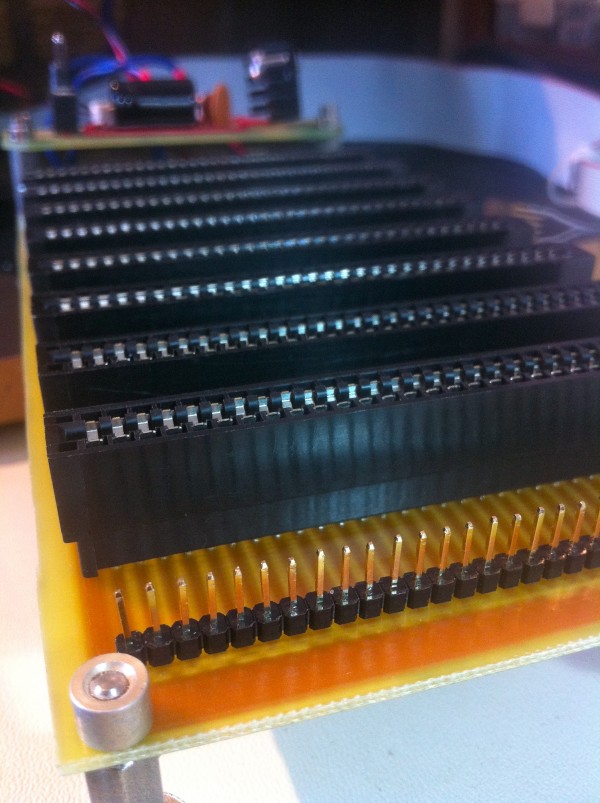 It was a bit tedious to build, but just look at all that potential! Why, Veronica may turn out to be Skynet by the time those are all filled. Well, if Skynet ran on a noisy 1Mhz bus riddled with timing problems, I guess. So, probably not Skynet. Please don’t shoot me, Sarah Connor. 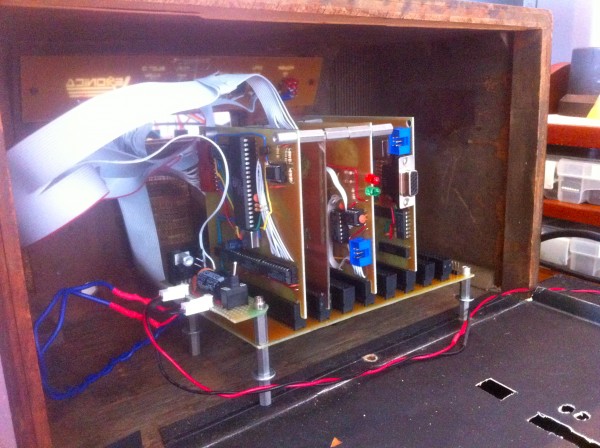 With all this luxurious space, I can be frivolous and leave empty slots between cards. That’s handy, because my VGA board is currently too tall for one slot, and both it and the ROM board have programming headers that are difficult to access if installed next to another card.

Once again, Veronica is past a minor stumbling block, and ready to move forward. Or is she? More trouble may be afoot. Stay tuned to find out.