A “Whiskey Bar” could be described as a thing that contains whiskey. That applies equally well to structures of ill repute and furniture modifications. As my regular readers know, I am fond of the brown spirits. I have also recently become the staff of one Sprocket H.G. Shopcat, who finds the whiskey cabinet fascinating. It’s only a matter of time before cat meets whiskey meets floor begets broken glass and single malt everywhere.

The whiskey cabinet in question is a lovely thing- a housewarming gift from some amazing friends of mine. It’s one of my favorite pieces of furniture in Dunki Freehold. The whiskey lives in an open area in the middle, which is attractive, but somewhat vulnerable. 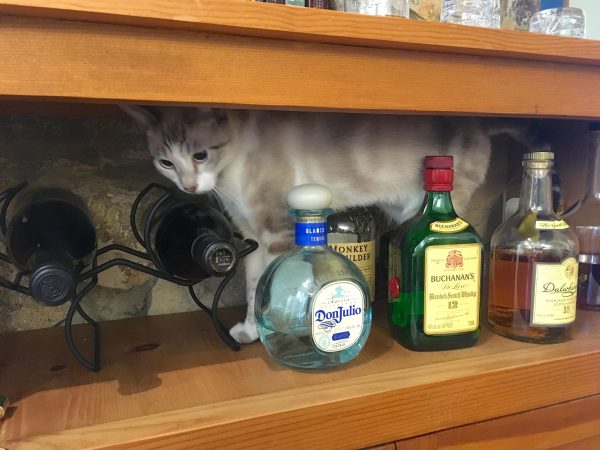 As you can see, Sprocket finds the whiskey cabinet very interesting. Her face reveals a somber acknowledgement that she has made a terrible mistake. Yet she persists.

A simple metal bar across the front of the opening would deter the cat, restrain the bottles should she get in there, and also serve as earthquake insurance. A triple win! It would also be nice if the bar was easily removable, in case larger items don’t easily fit past it.

I was imagining various complicated contraptions involving hinges, magnets, split bars nesting astride, and so on. Then a friend suggested spring-clips used for hanging brooms and such. This key insight simplified the project by roughly 1036 times (948 times metric). In fact, thanks to this idea, the whole project came together so quickly and easily that the ROSI (return on satisfaction investment) was among the highest on Blondihacks to date.

I’m a bit weary of painting things. Since the whiskey cabinet is a nice old-timey style with black-oxide hardware, this project gave me a great opportunity to experiment with some patina products for steel. The one I’ve had my eye on for a while is JAX Iron, Steel, and Nickel Blackener.

There are a lot of ways to blacken steel and achieve various black-oxide-like effects, but most involve high heat, electricity, or other exotic processes. JAX claims to be a simple wipe-on patina that blackens and ages steel to various degrees depending on application. 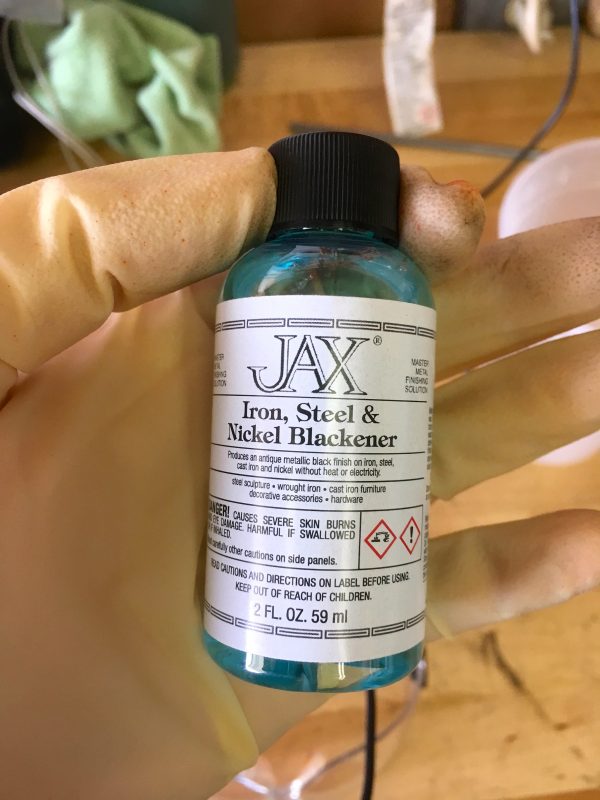 This stuff is very cool. I believe it’s an acid of some sort, with other mysterious chemicals mixed in for the blackening.

The pricing on JAX is a bit of a riddle. I didn’t realize the strange situation until it was too late. The 2oz bottle you see above is $40. Yes, really. However, a one gallon bottle is $72. Yes, for 44% more money, you get 98% more product. I cannot explain that, except perhaps there’s a hazardous materials shipping charge that sets a price floor? In any case, don’t make the mistake I did- either buy the gallon up front, or get it from a local supplier.

It’s recommended to clean and decontaminate the steel with an acid solution before applying JAX, to get a good key and an even finish. Diluted hydrochloric acid is great for this. Where does a person get hydrochloric acid? The same place you get all the best and nastiest chemicals that mere plebeians like us can buy- Home Depot’s pool section. The pool maintenance and garden sections of a home center are the best kept secret for all manner of nasty chemicals that would probably get you on a watchlist if you bought them in any other context. In this chemical wonderland, you can buy gallon jugs of hydrochloric acid for pennies. It is diluted to about 30%, but that’s plenty strong for our needs. Even better, I already had some on the junk pile. I don’t have a pool, so don’t ask me why I have it. One does not question the junk pile. 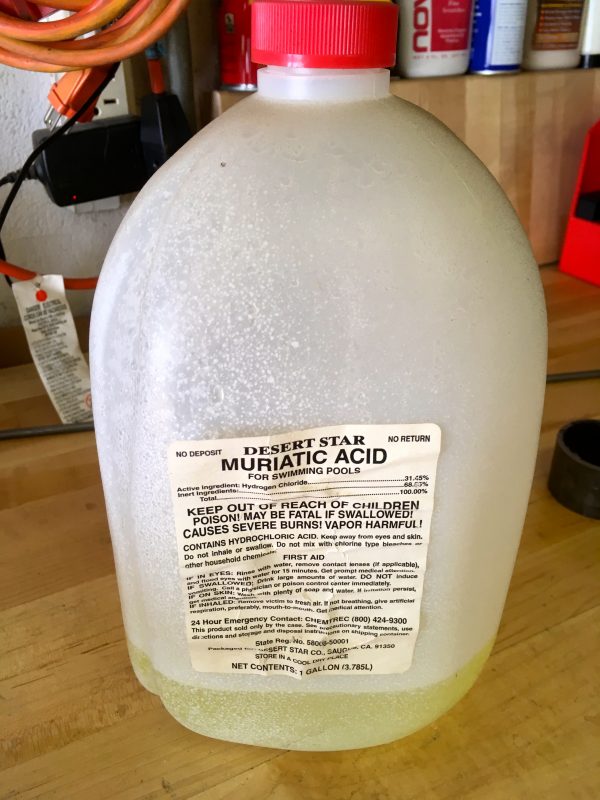 I actually diluted it further by filling this jug 1:1 with water, getting our solution down to 15% HCl.

After wiping down the steel with our diluted acid and letting it air dry, it was ready for JAX. I wore gloves, goggles, and a respirator for this. All these chemicals have some pretty nasty fumes, and getting splashed with them is probably not a great idea. Your mileage may vary. 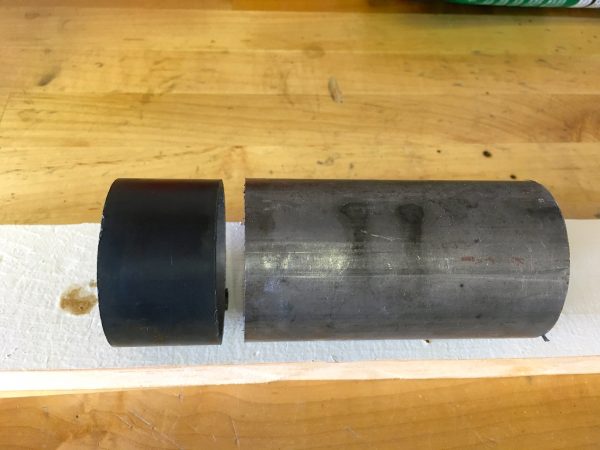 Here’s the result after brushing JAX on to some 3/16″ wall 2″ tubing. It dries in about an hour, and you can rinse it off sooner to control the darkness. You can also scuff it after application for other interesting patinas.

The resulting finish still feels like raw steel, but looks almost like paint. It has a deep, interesting tone, much like staining wood. I’m not sure if the result protects the steel from corrosion like paint would. My guess is maybe a bit? Time will tell. It was very easy to use, though, and I absolutely love the result.

With that test a success, I applied the same steps to a piece of 1/4″ round bar that I found on the junk pile for use in this project. Prejudicial application of a hacksaw made it the length I needed for my whiskey cabinet. 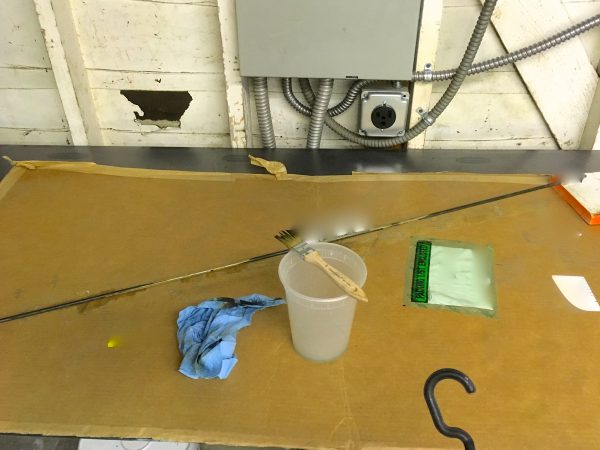 Applying an even coat to a small diameter round bar was much trickier than the broad flat tubing I tested with. You can also dip pieces in JAX if you have a tray or container large enough. I only had 2oz of the stuff though, so it was a brush and some patience for me.

I experimented a bit with the process here. The tubing that I showed above was rinsed and dried after a few minutes. For this round bar, I let it air dry naturally to see how dark it would get.

After sitting for perhaps an hour or two, it acquired a brown layer on top that looked a bit like flash rust, but buffed right off with a shop towel, revealing a very nice finish underneath.

This finish is very difficult to photograph, but I gave it a shot. 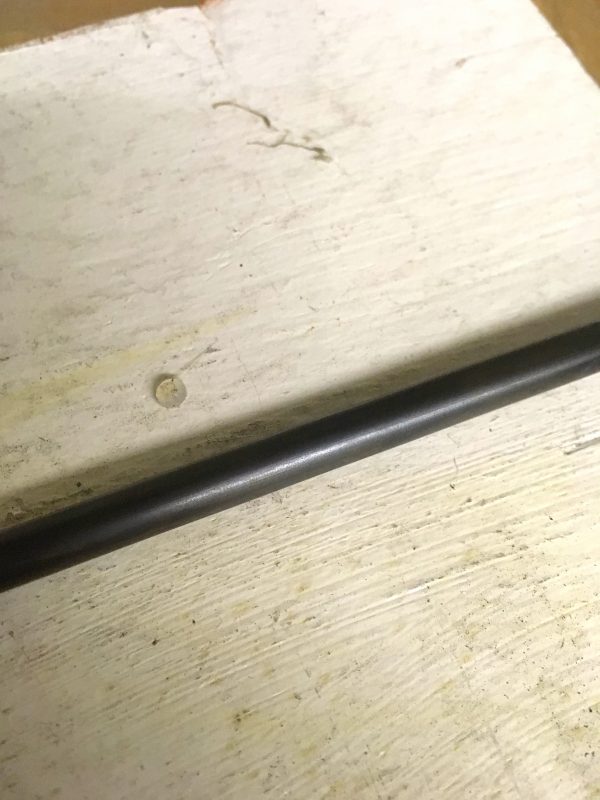 It’s a deep black, but it still looks and feels like raw steel. It feels like something you’d find on an old tractor, or an old machine tool that has been well cared for. I really love the finish!

The next step was preparing the aforementioned spring clips. I needed something that would hold 1/4″ bar, which is smaller than these types of clips are usually made for. I ended up on Amazon and found these clips that are part of some pegboard tool storage system. 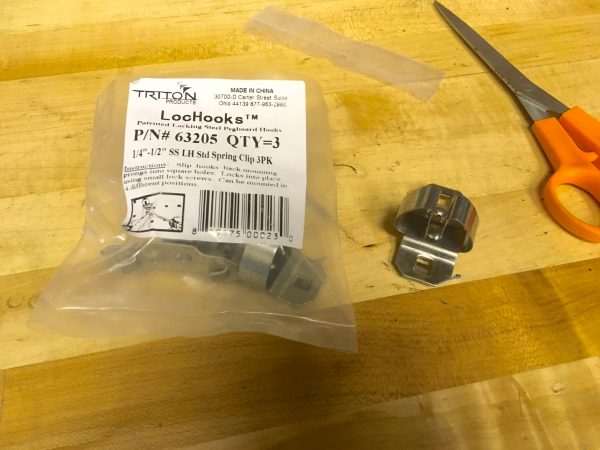 For some reason, they come in packs of three, and they’re a bit spendy ($2 apiece) because they’re part of some fancy tool storage system.

These clips were perfect, except for the pegboard mounting tabs on the back. Those would not do. Luckily they are only riveted in place. 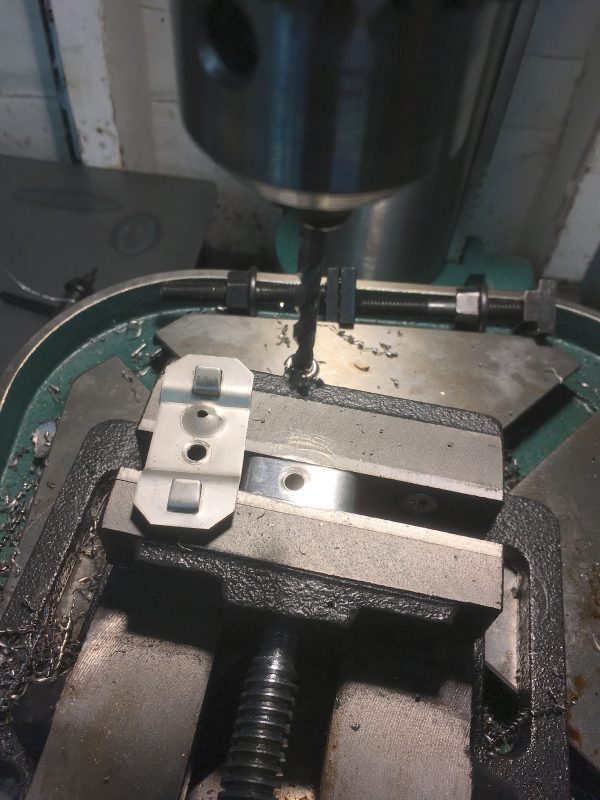 The drill press made short work of those rivets, and now I had the clip parts by themselves.

These clips even came with their own little wood screws for mounting, and these fit perfectly in the hole left by the rivets. Don’t you love it when a plan comes together? Time to mock up the final installation! 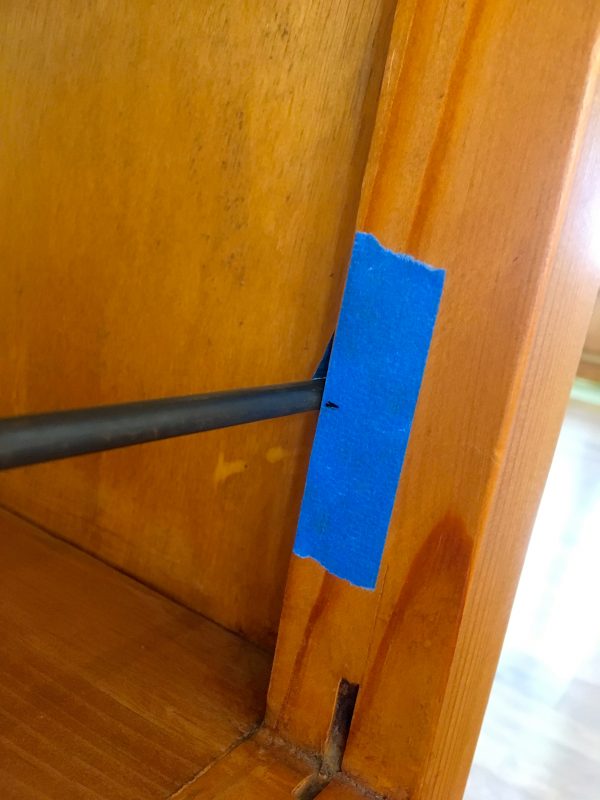 Today’s protip- if you need to mark something on fine furniture, blue tape is your friend. Blue tape, as I’ve so often said on this blog, is the most useful thing in my toolbox. 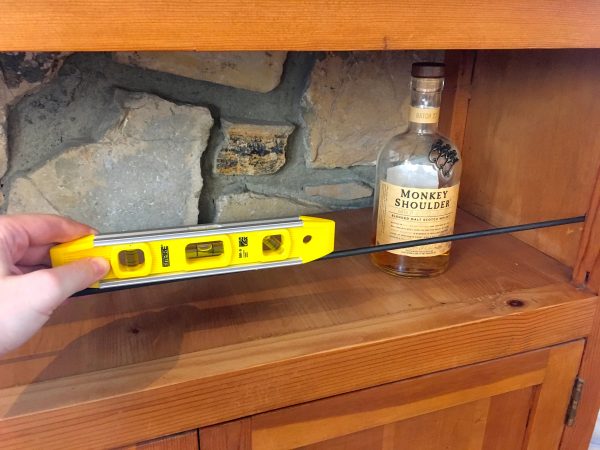 For the height, I aimed for slightly below the average belt line of the bottles. I wanted it to be easy to get them in and out, but make it just high enough to make it hard for an 8lb furry mammal to push them out. I’m mocking this up by holding the bar in place with, you guessed it, blue tape.

With the height established, we’re ready to install! 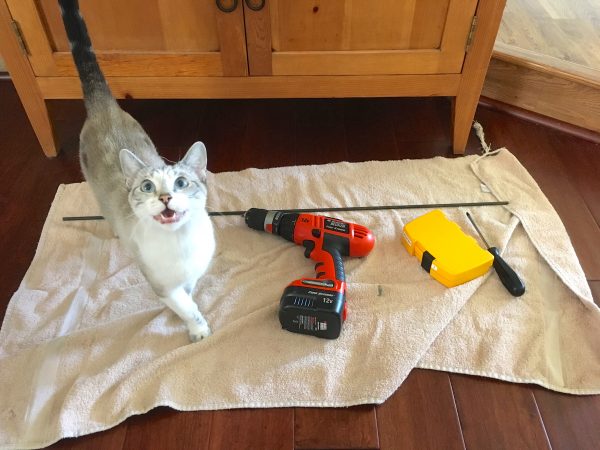 So far, Sprocket seems enthusiastic about the project. Time will tell if she approves of the final result. 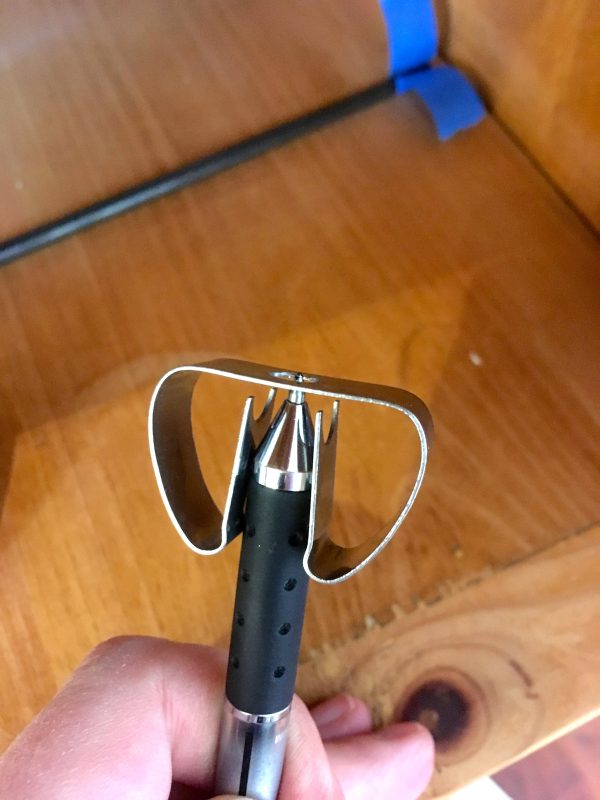 Today’s second protip- the spring clips will hold themselves on your marking implement, so it’s trivial to mark your drilling location.

I pre-drilled holes for the small wood screws that came with the clips. To prevent accidentally drilling too deeply, I choked the chuck up on the bit so that only the desired length is exposed. 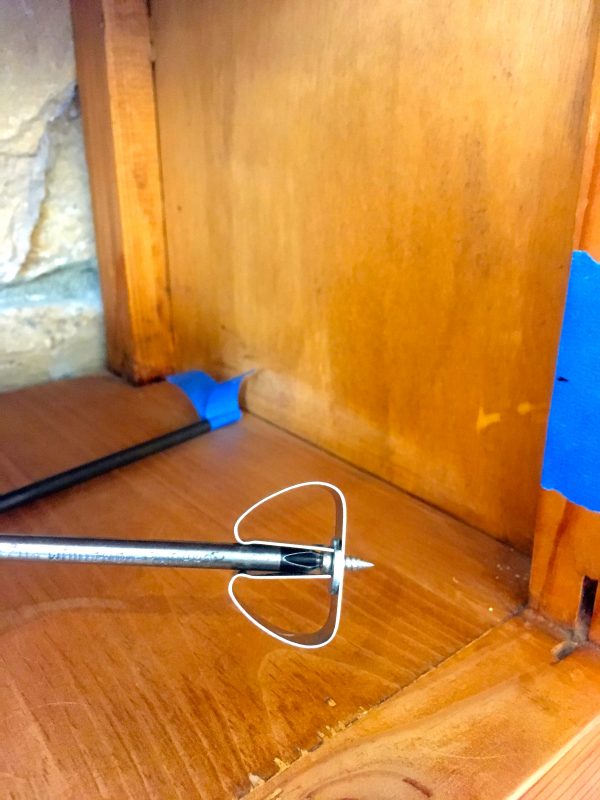 The same trick used for the pen works for the screwdriver as well. 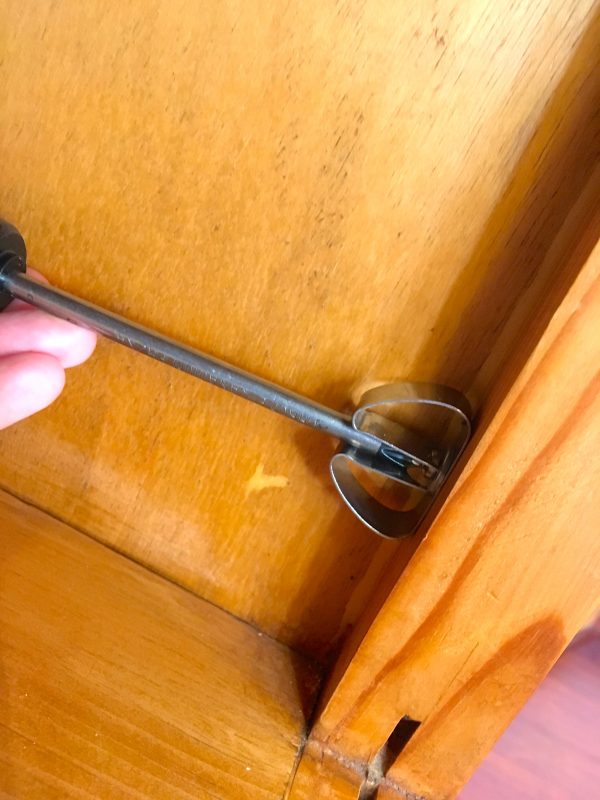 I debated painting these clips, since they are chrome and the bar is black. However, they are fully in shadow in the cabinet, and you can only see them edge-on, so they are pretty invisible once installed. Painting them would have been a hassle and just didn’t seem worth it.

At this point I did a test fit of the bar, and found it to be a bit looser in the clips than I’d hoped. These clips are rated for 1/4″ – 1/2″, so I’m right at the lower end of their intended use case. The same friend who suggested these clips suggested a simple sub-hack to solve this. As you can see, I outsourced the brains of this operation. 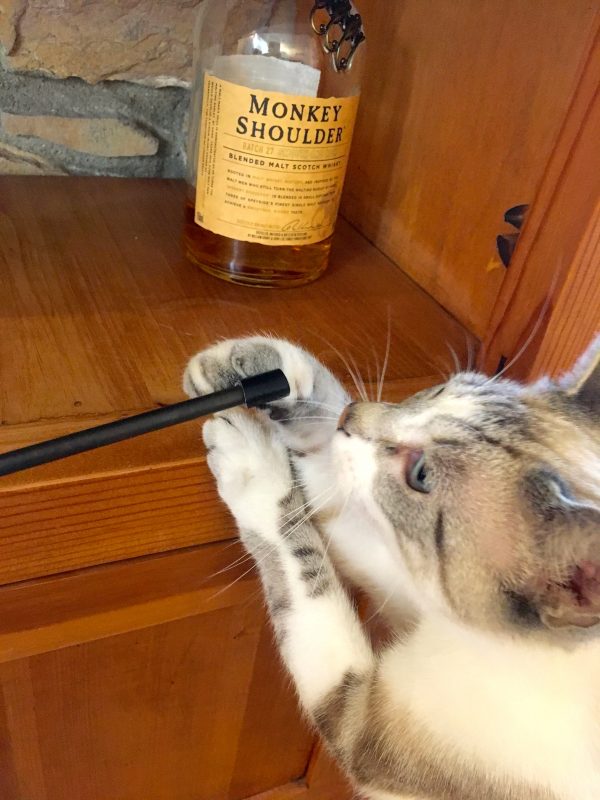 A couple layers of gaffer tape applied to the ends of the bar made them a snug fit in the clips. Sprocket has inspected, and approves, of this sub-hack. 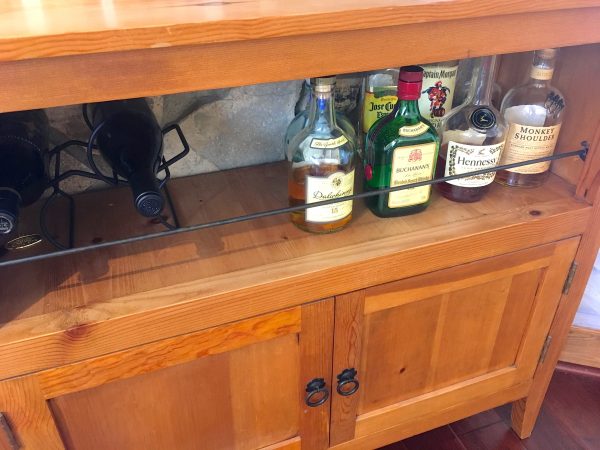 The only question remaining is- does it work? 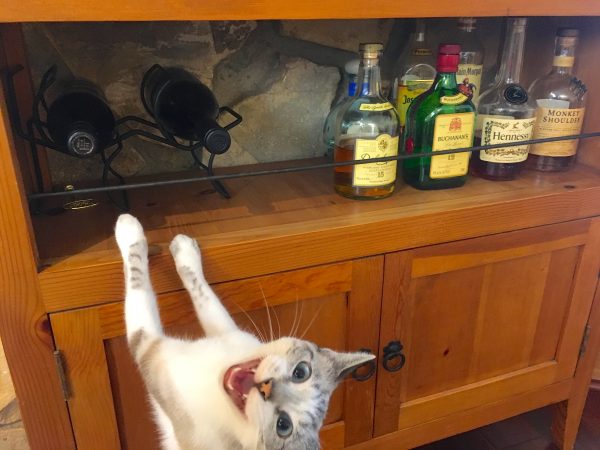 Sprocket has an opinion about it, as she does about most things. And by “most things”, I mean “absolutely all things”.

You may have noticed most pictures of Sprocket H.G. Shopcat involve her mouth being open. You might think I am very lucky to catch her in those moments. In fact, I have determined empirically that all parts of Sprocket’s brain are connected directly to her mouth. Thus, photos such as these are the rule rather than the exception. 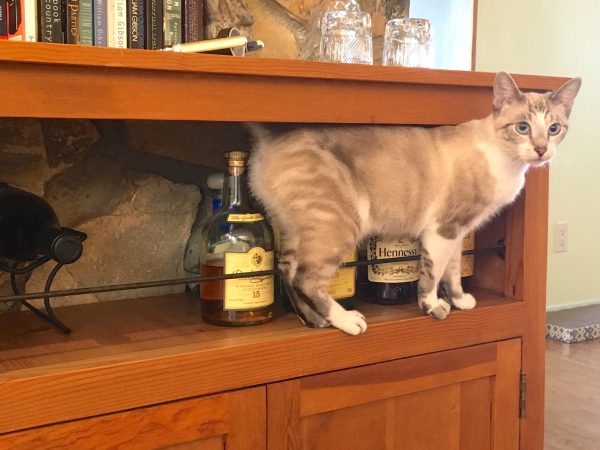 Huzzah! As you can see, cat has been successfully deterred. 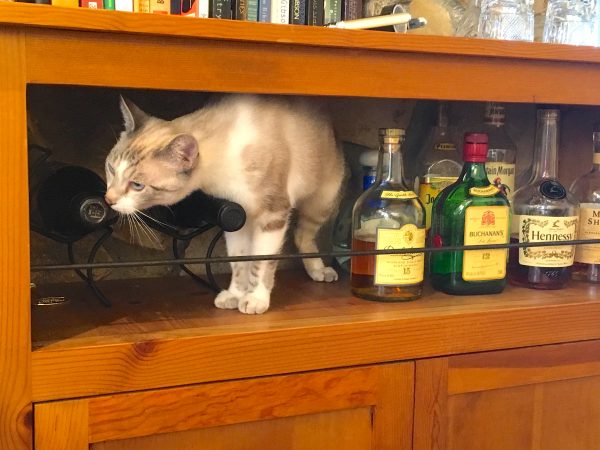 Well, at least briefly. However, I think you can see from this angle that the bottles are safe and sound, despite Sprocket’s efforts to sneak the occasional finger of Dalwhinnie 15-year neat when I’m not looking.

This was a very simple project, but I got to try out JAX, which will be making a significant appearance in an upcoming post. Also, I am assured the internet loves cats, and I’m always looking to increase readership here at Blondihacks. Here you go internet: cats cats cats.

Speaking of readership and cats, have you considered supporting me on Patreon? Sprocket needs food, I need whiskey, and it’d be swell if you chipped in a few bucks. Thanks to all my patrons, and to all my loyal readers who have been with me for so many years!